Cape Town under siege by kidnappers

They demand up to Sh140 million in ransom 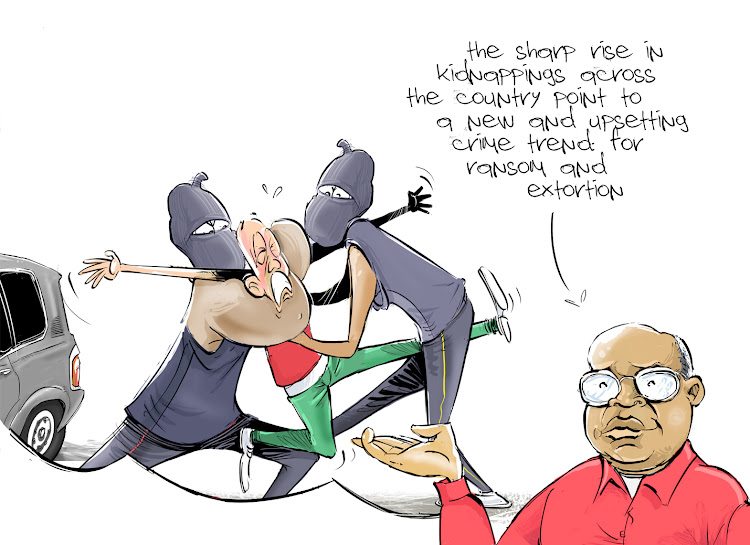 A couple of weeks ago, as a family walked their five-year-old child to school on a cold winter’s morning in Cape Town, six armed men swooped in and snatched the child from them before squealing tyres signalled that they were getting away and fast.

The traumatised family had just become a kidnapping statistic in what appears to be one of the fastest-growing types of crime in Cape Town, and the rest of the country for that matter, where latest crime figures record that kidnappings have risen by 59.1 per cent.

In a few short hours, the kidnappers had made contact and issued their demands, and just over 48 hours later, the little boy was back in his parents arms, while around them, unconfirmed rumours of a ransom paid swirled.

Experts say the sharp rise in kidnappings across the country point to a new and upsetting crime trend: kidnappings for ransom and extortion.

The kidnappings that most often make the news involve wealthy business people or their family members, and security experts told me that these crimes are on the increase because the criminals are getting paid off.

It would appear that gangs have realised that a lot less effort is needed to orchestrate a kidnapping than other major crimes. And that really all they need is a telephone and a bit of homework done on the victim, and they can name their price.

As one expert told me: “Criminal groups specialise in kidnapping for ransom as it’s perceived as a relatively low-risk, high-reward endeavour.”

This resonates with the views of security experts, who claim that kidnappings for ransom are operated by large, specialised syndicates, who are demanding anything between R500,000 (about Sh3.5 million) to R20 million (about Sh140 million) in ransom.

The experts said that while kidnapping for extortion or ransom contributes to less than 5 per cent of the sample analysed by the police, the figure may be higher as many cases aren’t reported due to threats made by the perpetrators.

In July, Police Minister Bheki Cele said that in the last year nationally, 3,306 kidnapping cases were opened with the police.

There have been 29 cases of kidnaps involving hijacking, 37 involving robbery, 21 cases were rape-related, 18 cases were linked to revenge, 10 cases were domestic-related, six cases involved a child removed from its guardian and two cases of extortion.

Some of the recent cases include that of a 32-year-old mum, who was kidnapped in May after leaving work. She was taken by men while driving along Varkensvlei Road in Philippi, and then disappeared without a trace while her car was found abandoned. She was released and found three weeks later.

There was also the high-profile case of a 69-year-old businessman in the construction industry. The man was kidnapped in front of his business in Cape Town in broad daylight outside his office and held for 11 days.

The one factor linking most of the kidnappings has been the fact that the kidnappings have so far affected so called “minority groups” foreigners, such as Chinese, Bangladeshi and Ethiopian businessmen, as well members of the Muslim business community.

As such, neither the public nor any of the main political parties, the ANC, DA, EFF or groups such as Afriforum, are concerned. It is not their main constituents being kidnapped and so they are not making any noise about it.

Because these minorities don’t feel they have public or political support, they tend to pay off the kidnappers and this encourages the criminals to continue.

Of course as the gangs get more brazen, this modus operandi of theirs could change. And if, for instance, they start snatching wealthy, high-profile black or white South Africans, then the issue might make it to the top of the political agenda.