Ruto is pursuing strategy Moi perfected to weaken the Opposition In Kenya, all the cool kids were doing it or trying to. I couldn’t say for sure, but perhaps, there was a certain young man in Eldoret who, when he wasn’t practising chicken husbandry, might have tried his hand at the backslide.

He has certainly got the knack of the democratic backslide, which is a dance all the country’s presidents from Jomo through Moi, Kibaki and the outgoing Uhuru have mastered. Perhaps instructions come with the office manual.

The President-elect (as he is while I write this) has not even ascended to office yet, but already is welcoming defectors and doing his bit to encourage the democratic backslide.

Politicians crossing the floor to better their own personal lot is not a new thing. Since Independence, the most frequent direction of parliamentary defection has been from Opposition benches to the government. They just seem to be coming earlier than ever this time around.

Those who know history will tell you that one year after Independence, Kenya's main opposition, the leadership of the Kenya African Democratic Union (Kadu) merged with the ruling party without any consultation of the electorate, following offers of Cabinet posts to party leaders Daniel Moi and Ronald Ngala.

In the modern multiparty era, and here I mean since 30 years ago, when many of the pensioners leading the country were being christened “Young Turks” by Philip Ochieng, defections have been as much a part of the political fabric as the elections themselves.

When I say pensioners, I am defining them as they are defined by the Treasury or the Public Service, where the retirement age is now 60.

Before the 1992 elections, when members of the nascent Opposition wanted to sell their souls to the highest bidder, Kanu, they pretended to be mature democrats who were just sharing a plate of ugali, some claimed it was pilau, with the President.

After the election, they stood up at public rallies in the heart of their constituencies and went to kneel before Moi, literally in some cases and figuratively in others, to say they were leaving the party whose ticket got them to Parliament to rejoin “chama cha mama na baba”. 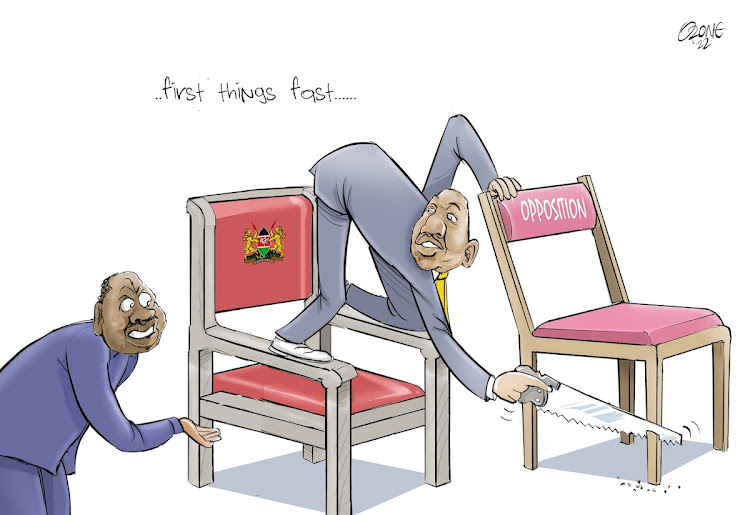 A number of young Kenyans, including myself, were aghast until we remembered that we had heard of a party called Kadu, whose members all crossed the floor to join Kanu.

Those defections were the brainchild of, among others, the one they called sungura mjanja, Tom Mboya.

One of the first to cross over was Daniel arap Moi and incidentally, the last to leave the Kadu benches was Martin Shikuku, the same fellow who went for a midnight ugali feast with his old frenemy at Kabarnet Gardens in Woodley or Kibra, depending on your politics.

In 1993, Kanu, which stole that first return to multiparty elections, managed to rig intelligently, as its former VP Kibaki had advised, and appeared to have just squeaked through with a wafer-thin parliamentary majority.

Some of the newly minted moneybags of YK 92 aided and abetted Moi in luring defectors, a number of whom lost their deposits when forced to stand again.

Of course, with this system of Independents and super-coalitions, it seems people can switch sides with no fear of having to rerun the election.

The problem is, all this does is to further undermine democracy as quite frankly, it is a betrayal of the people's mandate as voiced at the most recent election.

Some democracies, such as India, have anti-defection laws, which came about as the recognition that these political defections, especially where defectors shift parties so as to be appointed ministers, were more trouble than they were worth in the long term.

Perhaps as Kenya's democracy evolves, similar laws will come to pass. But for now, voters are just going to have to put up with the political chameleons that they seem unable to sift out at the ballot box.

There’s political and media freedom, yet many are losing faith in elections
News
1 month ago
Has the time come for a radical political party?
Post a comment
WATCH: The latest videos from the Star
by Mwangi Githahu Columnist
Lifestyle
28 August 2022 - 05:00
Read The E-Paper