Open letter to the incoming President

• The time to manage expectations is right now, or as soon as possible 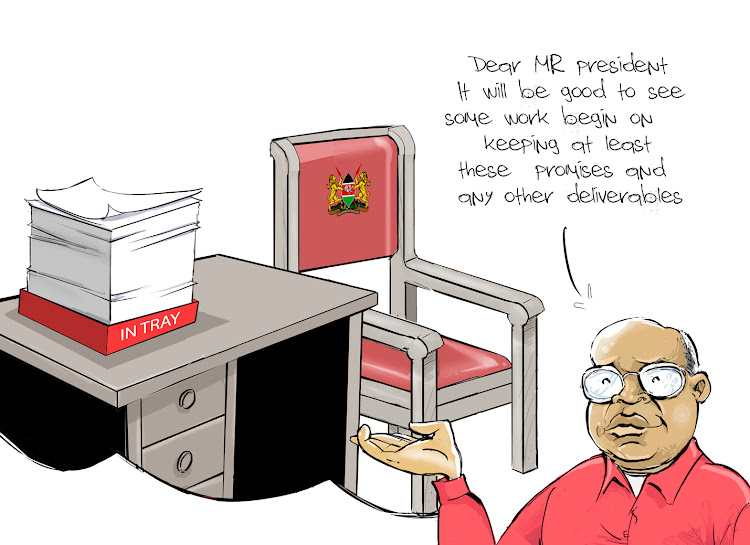 All things being equal and assuming things did not go pear-shaped after Kenyans cast their votes, by now your new government should be in place and the job of getting the country back on track should begin in earnest on Monday, that is to say, if it hasn’t already started.

I am hoping that no matter how over the moon you are on having won the election, you will keep some perspective in your celebrations.

There really is no need for a series of “homecoming” parties at which more millions will be spent. In fact, what should be paramount is getting down to work.

Getting Kenya back on its feet won’t happen if everyone is busy partying or even busy praying. A lot of hard graft is necessary and you should take the lead.

Every new administration should have a “to-do list”, and there are bound to have been promises about what accomplishments were planned for the first three months or the initial 100 days.

It will be good to see some work begin on keeping at least these promises and any other deliverables that played their part to convince the voters to choose your team instead of the others that were on offer.

Of course, just between us, we know there were many promises that were made during the campaigns that, as well-intentioned as they might have been at the time, will not be achievable, at least not just yet.

The time to manage expectations is right now, or as soon as possible. This way, you will prevent disappointment by establishing in advance what can realistically be achieved or delivered, and people can let go of any unrealistic presumptions.

You will find the more realistic voters, whether they supported you or the other lot, will have known this deep down in their hearts, but it would be great if you would stand up now with your hand on your heart and tell the people the truth.

I can guarantee you that the truth will buy you a hell of a lot more goodwill than lies and deception.

The other thing that will buy you goodwill is not being seen to treat those who lost the election as your enemies.

First of all, they are not your enemies as you have worked together before and may do so again in future, and if you run around shouting insults at each other, you will be wasting precious time.

As one of my late lamented uncles used to say: Time is that commodity the supply of which is never equal to the demand.

Since I am writing this before votes are cast, I can’t say whether you won overwhelmingly or just barely, but to ever so slightly amend what  Yash Ghai said back in 2010 after the referendum on the Constitution: “Democracy requires that the decision by the majority of Kenyans should be respected.”

You have won the election and now you must govern without fear or favour, and for me, this means turning to more of Yash Ghai’s wisdom: “Kenyans must remember that our propensity to forgive and forget is the cause of massive impunities and our present situation.”

This is the time to do whatever it takes to ensure Chapter Six of our Constitution comes into play and is obeyed by everyone. If there are some of your own supporters and favourites with integrity issues, for goodness sake, keep them away from any positions of leadership.

If you start with your own, nobody will hold it against you when you hold those who oppose you and your government to the same standards.

Meanwhile, you will find that five years go by very fast, and if you plan to try for a second term, you had better have a track record that you can show the voters.

But all the things I have written are things that you surely should know, but I am saying them just in case you need a reminder. Also, a wise person never knows all, only a fool knows everything.

Feel free to get in touch if you need further advice.

MUGA: What next president must do
Post a comment
WATCH: The latest videos from the Star
by Mwangi Githahu Columnist
Lifestyle
14 August 2022 - 05:00
Read The E-Paper