Why 'rage quitting' is all the rage

These patterns exist in some form across job roles and industries, but will take different shape in different contexts.

•Walking out of a job in anger can seem extreme – but there are often powerful motivations for doing it.

•The Covid-19 pandemic has only intensified the stressors that can lead employees to quit on the spot. 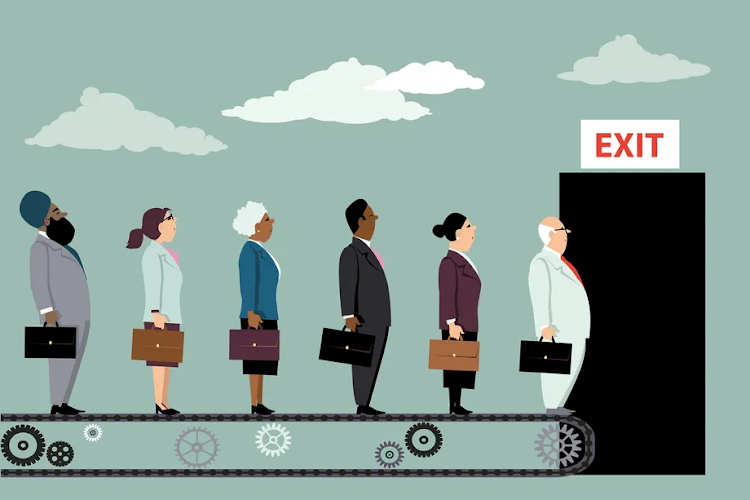 Many of us have fantasised about leaving a bad job in a similarly dramatic fashion. Yet far from throwing a temper tantrum, 'rage quitting' is a sign of serious flaws in a workplace: from lax health and safety standards to exploitative working conditions and abusive managers.

The Covid-19 pandemic has only intensified the stressors that can lead employees to quit on the spot. But as rage quitting tends to be the culmination of a series of work issues, employers can avoid being left in the lurch by paying attention to the warning signs – before an employee drops the mic on their way out the door.

The idea of angrily walking out of a job has been around since long before the phenomenon became celebrated in pop culture, like the 1970s country music anthem Take This Job and Shove It; and before video gamers started using the term ‘rage quitting’ in the 1980s to refer to angrily exiting a frustrating game.

Though rage quitting can look and feel impulsive, dissatisfaction with a job tends to build up over time, until an incident triggers the actual resignation. And having a safe space to land – such as an abundance of job options, another source of income (like unemployment insurance) or an upcoming opportunity (like graduate school) – can make it easier to pull that trigger.

These patterns exist in some form across job roles and industries, but will take different shape in different contexts.

There’s a lack of statistics about rage quitting, but Peter Hom, a turnover expert at Arizona State University in the US, points out that in Germany, for instance, employees of large companies get penalised for quitting without notice. The US has more at-will employment, so it would make sense for rage quitting to be more common there.

Sajeet Pradhan, who researches organisational behaviour at the Indian Institute of Management Tiruchirappalli, says compared to the US and Europe, India “is more culturally tolerant (unfortunately) towards abuse at work”, due to “power distance or the upbringing which has conditioned us to respect people in authoritative positions”. In India, according to Pradhan, “rage quitting is generally witnessed among highly-skilled jobs and the millennials”.

In general, says Nita Chhinzer, who researches strategic human-resource management at the University of Guelph in Canada, “higher-educated people are more likely to quit, because they think that their skills are highly transferrable and generalisable”. Yet those in lower-skilled, precarious employment can often quit with little notice. Peter Hom refers to people working for export-driven factories in China and Mexico: “It’s like musical chairs – they jump from job to job.”

And although young workers are sometimes perceived as flaky, “the truth is that before they have a sunk cost, for a sunk investment in the organisation, they’re making a decision about what’s best for them”, adds Chhinzer. It makes sense that they would quit an ill-fitting job more spontaneously.

This doesn’t mean that leaving in the heat of the moment is always logical. Chhinzer says that with “rage quitting, they’re not really stopping to make those rational decisions about something and just thinking about what are their options”. Fed-up employees might overestimate their ability to secure another job.

What lies beneath a rage quit

Though there are many reasons to leave an unsatisfying job, there are certain recurrent patterns that lead to spontaneous resignations.

One of the most common reasons is poor management. Abusive supervision can lead to emotional exhaustion. When managers fail to address employees’ repeated concerns, the explosive result may be those employees quitting in outrage.

Sarah experienced all of these in a recent three-month stint as a cashier at a small grocery store in Michigan, US. The 24-year-old had moved in with her parents for the summer.

She’d intended to work only part time as she prepared to leave for graduate school in Toronto, but the short staffing and intense manager demands soon had her working full time.

It was also clear that employee safety wasn’t a priority. The only young woman on staff, Sarah felt unsafe in multiple ways: drunk customers were sometimes belligerent, most people refused to wear masks and she was usually the sole employee in the shop.

The final straw was when a customer began to stalk her. Sarah asked her manager to move the employee rota from its public position in the shop, where any customer could see when she would be working, to a private space. Not only did the manager refuse, but she also shouted at Sarah for mentioning the stalker.

“My boss just immediately went for the gut. She was just like, ‘You need to be an adult. Why aren’t you being an adult about this?’ She repeated that so many times,” says Sarah.

She quit in that phone call, a month before the job would have come to an end. “I felt so bad because I really wanted to put two weeks [notice] in … But then the more I thought about it, and how little they had helped me and worked on the situation, I was just like, this is not worth my time or my safety.”

Sarah had seen the role as a temporary job and, while she was shaken up after rage quitting, she wasn’t in dire financial need. “I definitely think if it had been my dream job, I would have taken different steps,” reflects Sarah. She says that she would have been less likely to quit spontaneously “if it was a job that was already valuing me… if it was a job that was actually like a career”.

With rage quitters, ill treatment on one side breeds ill treatment on the other. After her manager failed to consider her safety, Sarah decided against serving out a notice period. Chhinzer refers to social exchange theory:

“The way you treat me dictates the way I treat you.” If a manager is switching schedules at the last minute, insisting that employees work extra hours or refusing to allow time off for bereavement, then employees are more apt to reciprocate with limited communication and little notice as well.

Some of these employee pressures have been magnified during the Covid-19 pandemic. Chhinzer says that in 2020, quit rates generally went down as people held onto jobs. But resignations have surged in 2021, so that “managers and organisations and HR departments are really worried about retaining talent”. Yet as Sarah’s experience shows, that worry doesn’t always translate into better safeguarding of employees, particularly in low-paid roles.

Indeed, safety has been a common catalyst for client-facing employees to quit in a rage. A nurse whose colleagues spread misinformation about vaccines; a restaurant worker whose managers hide the fact that Covid has been spreading among staff; or a retail worker worried about transmitting the virus to a vulnerable relative – all have left jobs semi-impetuously during the pandemic.

Business researchers were already exploring ‘death awareness at work’ before the pandemic. But Covid-19 has brought another dimension to this workplace anxiety.

For those who rage quit, especially those with high ‘death anxiety’, the ‘rage’ component “may be more likely to be triggered by the fact that employers fail to provide enough safety measures to protect their employees’ health”, notes Rui (Hammer) Zhong, a PhD student at the University of British Columbia in Canada, who researches the dark side of workplaces.

(This impassioned rage response is in contrast to another form of death awareness that Zhong and his colleagues have researched – death reflection, or ‘calm quitting’ on realising how short life is.)

As Chihinzer comments, “People are exiting not just based on poor treatment at work from managers and co-workers; they’re also exiting based on the situation at work,” such as a requirement to return to the workplace. “Those weren’t considerations before.”

For someone tempted to rage quit, it can be useful to gain perspective on what lies beneath the anger, beyond the immediate gratification of socking it to a bad boss.

It’s also useful to consider why more people don’t rage quit. Stories of overworked employees thumbing their noses at poor bosses are satisfying and sometimes inspiring. But of course it’s distressing to quit without a back-up plan.

Alexander was lucky to not depend on his DJ gig, as his main job was as a scientist. “It would have definitely been more difficult to walk away if I didn’t have another job already,” he notes.

And not everyone can afford to leave a soul-crushing job, or to depart with the final pay cheque in limbo, so it’s not always helpful for those who’ve landed on their feet to urge others to quit a terrible job immediately.

Alibel sees this all too often among her fellow Venezuelan migrants in Argentina, who don’t always have the legal or financial status to easily switch jobs.

When she arrived in Buenos Aires in 2019, the first job she took was selling cars over the phone. It didn’t take long to realise that this was an illegal operation and Alibel, now 28, quit straight away. She didn’t lose any pay because the job was entirely commission-based:

“If you didn’t sell anything, you didn’t gain a cent.” Yet while there are plenty of accounts of people rage quitting other shady jobs, not everyone can afford to take a moral stand.

Overall, quitting stigma may be diminishing due to the Great Resignation – although the departures of some employees with back-up options can make the situation harder for colleagyes left behind.

Ultimately, though, it’s up to employers to improve working conditions. “If employers pay decent wages and good benefits, that inhibits leaving,” says Hom.

Chhinzer says that among organisations focused on retention, it helps to be proactive, for example with weekly check-ins, perks like tuition subsidies or Fridays off in the summer.

If an employee does rage quit, this should be a wake-up call to the employer. Six months after Alexander left the overheated club clutching his DJ equipment, he reconciled with the owner and went back.

But the next year he walked out again, following more broken promises and unsafe working conditions.

“That was the last time I DJed outside of my own house. Just was fed up with the whole thing.”

Rooney was appointed manager last month but had to wait to receive his work visa before he could take charge.
Sports
2 weeks ago

Nimji dominated the match from the start and made light work of his opponent, winning 11-2 in all three sets.
Sports
2 weeks ago

Experts say that almost every attempt to get a political hashtag trending is probably paid for.
News
2 weeks ago

People felt they were not seeing photos from friends and family as much.
Sasa
2 weeks ago

Spotify to launch a separate play and shuffle button

The new update will be rolled out globally to iOS and Android users in the coming weeks.
Sasa
2 weeks ago

Bake blueberry muffins at home with these steps

Your pastries will be done in just 30 minutes.
Sasa
2 weeks ago

Surveys from around the world show that men everywhere find it more difficult to talk about mental health.
Sasa
2 weeks ago

Plant-based means that you only focus on eating plant produce.
Sasa
2 weeks ago
WATCH: The latest news from around the World
by BBC NEWS None
Lifestyle
02 August 2022 - 15:15