• Under the oceans, lakes and rivers around Kenya lies a rich reservoir of unique artefacts and pieces that enrich the country's heritage

• Many are, however, under threat from exploitation and theft from people who want to make quick cash from them, hence the calls to save them 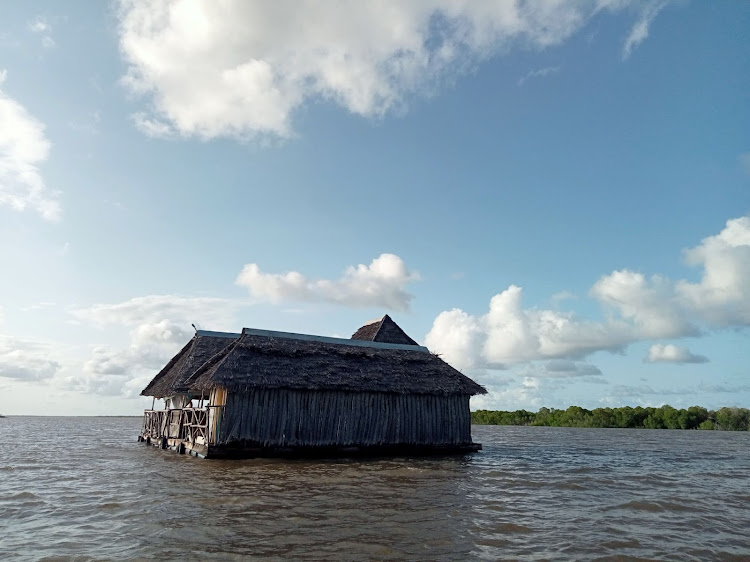 The alluring floating bar in Lamu island. Beneath the waters lies a rich reservoir of underwater heritage
Image: CHETI PRAXIDES

Kenya has a rich maritime cultural past, which is an integral part of its identity. But the country must move fast to protect its underwater heritage from looters and thieves, who want to make a living out of it.

Under the many water bodies in the Coast and shoreline of Kenya lies unique, priceless and mostly untapped heritage, mostly in the form of ship and plane wrecks.

Aboard this wrecks lies the richest forms of heritage, which is mostly treasured objects like gold, silver and other artefacts key to the country’s heritage.

Some of these wrecks are actually sunken cities that were once occupied by people.

Athman Hussein the Coastal assistant director of antiquities, sites and monuments at the National Museums of Kenya, says one such heritage is the Ungwana City at the mouth of River Tana. It was discovered after researchers found evidence of walls, which suggested the city had been inhabited.

“We believe the city sunk after its foundations were eaten away by the influence of the Indian Ocean and River Tana,” Hussein says.

These wrecks and many others across the Kenyan territorial waters are, however, at great risk of being destroyed by fortune hunters, who may destroy the heritage.

Kenya, as Hussein explains, has very few marine heritage researchers and experts, which makes it hard for the country to determine the exact amount and potential of heritage lying under the sea and other water masses.

The NMK has only been able to train two specialists, who have been helping with the identification of some of the wrecks.

Hussein says Kenya’s underwater heritage heightened following an archaeological project where the NMK received huge funding from the Chinese government, which also collaborated with Kenyan experts to unearth the underwater and archeological terrestrial resources a few years back.

This alliance enabled the team to explore and scan the large part of the Manda bay on the Lamu waters following confirmation that a Chinese ship had sunk there in the 15th century.

“Cheng Ho, a famous maritime explorer, sailed all the way from China and actually circumnavigated the world. He passed through Lamu during his trip, where one of his ships capsized near Pezali in Manda Toto,” Hussein says.

He says a few porcelain fragments were excavated by the experts and tested in China, and they were confirmed to belong to Ho’s sunken ship.

He says they have never been able to locate the wreck itself but that the area has been marked for further excavation as there is evidence of strewn artefacts about a kilometre square near and around the Pezali area.

Several local wrecks were also discovered within the Lamu bay, including the Lamu harbour.

The team moved to the Mombasa Old Town harbour, where they recovered more wrecks, including the famous Portuguese wreck of the 17th century and a 19th century British warship.

Other wrecks have also been located in Ngomeni, Kilifi county, including an old Portuguese wreck of the 16th century, which Hussein says is a photocopy of another ship found in Namibia with lots of treasures on board.

“The only difference is that we have not yet recovered the likes of gold and other goods that were found in Namibia,” Hussein says.

He called on the government to develop proper legislation that would help protect and preserve the rich historical materials hidden beneath the waters of the sea, lakes and rivers on the continent.

“The Unesco 2001 convention on the protection of the underwater cultural heritage provides a roadmap for protecting this heritage,” he says.

“Looting of any kind is a criminal act punishable under the law and, therefore, the government needs to ensure those looting our underwater heritage are deterred.”

He added that Kenya and the rest of the African countries need to allocate enough funds to fully exploit underwater archaeology in African waters.

He however stresses that without proper management, the exploitation of marine environments would result in conflict and endangered resources. And as such, caution should be taken in ensuring they are properly managed.

Julius Mwahinga, acting director for culture programme at the Kenya National Commission for Unesco (Knatcom), describes underwater excavation as the most expensive undertaking whether by a group of people, an organisation or a government.

He says locating the simplest of items inside the wrecks or in suspect areas under the water takes as long as 30 minutes.

“It could be a coin and we are doing this using sonar equipment, which itself is not cheap to obtain,” he says.

Mwahinga says in the meantime, all they can do is to identify and mark target areas with a view to document and have them excavated once specialised equipment is obtained, which will enable the areas to be accessed and the sea bed scanned.

He says the cheapest research ship costs millions of dollars.

“The cost actually equates that of one navy ship and probably even more than that. The undertaking is not that simple but Kenya must try,” he says.

He said as a result, foreign excavators and researchers endowed with the perfect equipment have been raiding the Kenyan waters and posing as fishermen when they are actually excavating the country’s artefacts, which are then later sold abroad.

Mwahinga says the enormous size of the Kenyan territorial waters poses a challenge to effective surveillance and that sometimes, patrol officers are unable to pick out such cases.

“The Kenyan maritime territory is figuratively the size of four or five counties joined together, which makes it hard to surveil effectively for such people. It’s actually about 200 nautical miles,” he says.

“It’s a new thing for us as NMK, and we are still learning the ropes as far as identification, promotion and education of underwater cultural sites.”

Hussein says the sparse population in their staff also makes it hard to effectively research, manage and surveil underwater heritage in the country.

“We are sparsely populated staff of just about 1,420 all over the country. For instance, a ship that will be able to undertake scanning, identification and excavation needs more than 70 staff, minus the experts,” Hussein says.

At the Coast region, there is only a small lab at Fort Jesus in Mombasa, which was established as a result of the excavation of the Portuguese ship wreck.

“But at the moment, if we have to excavate all of this, we need to have a fully fledged institute, including storage facilities, to enable us conserve and treat the recovered and, thereafter, create a museum for them,” he says. 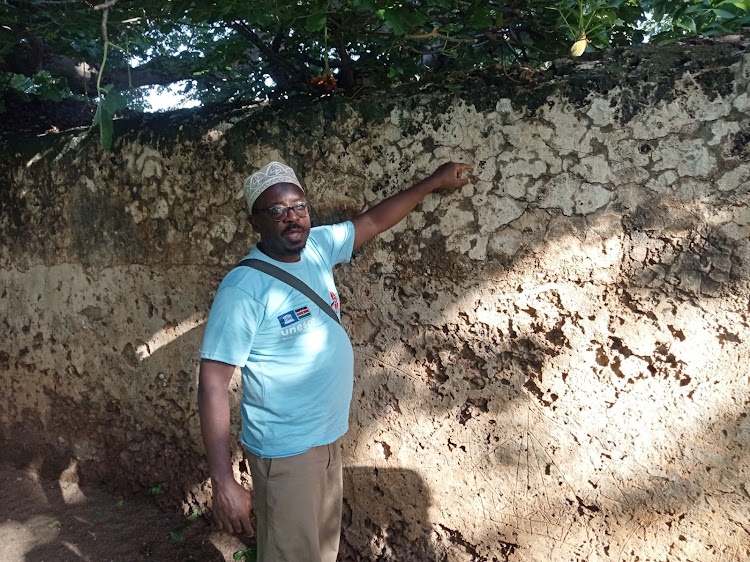 There has been a lot of discussion on whether to establish an underwater archeological site or museums to ensure proper conservation of artefacts on the seabeds.

Mohamed Mwenje, the curator in charge of the Lamu museums, says Kenya has two sites at Fort Jesus in Mombasa, which can developed to become underwater museums.

He, however, says such moves are not easy as they must involve gazettement of the individual sites, something he says takes quite some time to achieve.

“Then from there, we have the issue of putting up the necessary infrastructure that will enable visitors to explore those underwater museums safely and comfortably,” Mwenje says.

All in all, Mwenje says Kenya has the capability to establish successful underwater museums that will, in essence, boost tourism and enhance the country’s presence globally.

“We could easily reach the level of the Museo Subacuático de Arte, located off the coast of Isla Mujeres in Mexico's Riviera Maya,” he says.

“It’s the world's largest underwater museum and composed of more than 500 life-sized sculptures. It offers incredible displays hidden 28 feet below the ocean's surface.”

In the meantime, Mwenje says the NMK chooses to remain secretive about just how much heritage there is in the ocean so as to deter looters.

“This is because once you announce how many there are, thieves and looters will come from all over, wanting to take it away or disturb it,” he says.

He says the Coast, especially, has witnessed an increased number of ships masquerading as fishing boats “only to do what we are unable to do for the time being”.

The NMK, Mwenje says, has partnered with the Kenya Navy and even trained some of the officers on how to identify and protect areas that are suspected underwater cultural sites.

Also on board is the Kenya Maritime Authority and the recently established Marine Police Unit.

“For the time being, the road is so long and we have just started. We believe that through the support of Knatcom, we will be able to identify and take advantage of this huge underwater resource that we have in Africa,” Mwenje said.

This heritage offers opportunities for sustainable tourism development not only in Kenya but the entire east African coastline, Mwenje said.

But legal structures are needed to protect it from the threats of treasure hunters and uncontrolled development, he said.

Looting of such artefacts had robbed African countries of their rich history, he said.

He urged Kenyan and African universities and tertiary institutions to formulate marine archeology courses to ensure underwater heritage is fully exploited and tapped.

The expert concurred that treasure hunting in Africa poses serious threats to the preservation and protection of crucial underwater historical artefacts.

“Preservation and protection of the unique underwater archeological artefacts provide greater opportunity to the diversification of the tourism industry in Africa,” he said.

In 1977, Caesar says, Kenya became the first country in sub-Saharan Africa to undertake underwater archaeology and realise fully the real value of underwater cultural heritage during the excavation of ‘Santa Antonio de Tanna’ shipwreck in Mombasa.

The archaeologist said over the years, the country has undertaken underwater archaeological surveys to document and understand the underwater cultural heritage.

“Kenya has made huge milestones in the protection of her underwater cultural heritage, with NMK being positioned as a centre of research and studies on the continent. We have huge potential for recreational tourism in underwater heritage,” Caesar says.