They discovered the whale completely trapped in the red fishnet so it could not even open its mouth.

•They discovered the whale completely trapped in the red fishnet so it could not even open its mouth. 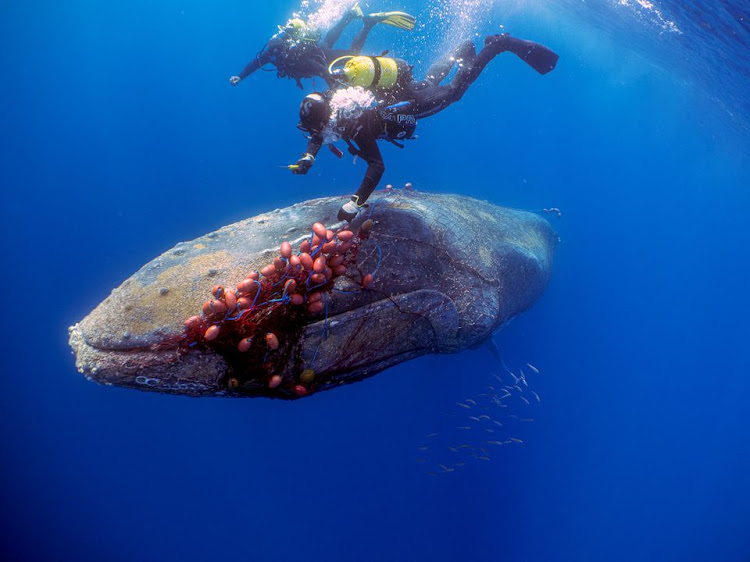 Spanish divers try to cut an illegal drift net off a 12-metre-long humpback whale, who got entangled in it near Cala Millor beach in the Balearic island of Mallorca, Spain May 20, 2022.
Image: REUTERS

In a gripping underwater rescue, Spanish divers have freed a 12-metre long humpback whale entangled in an illegal drift net off the Balearic island of Mallorca.

One of the divers, 32-year-old marine biologist Gigi Torras, said last Friday's rescue and a little gesture of appreciation from the giant mammal were also a birthday present for her - the 'best ever' in her words. 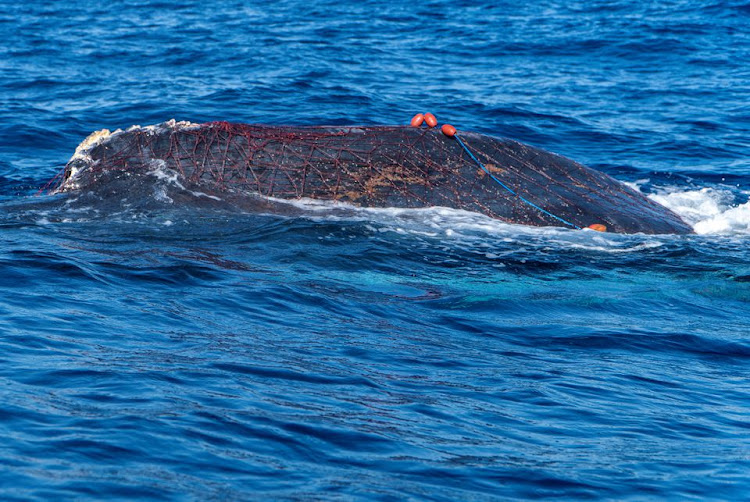 A 12-metre-long humpback whale is seen entangled in an illegal drift net near Cala Millor beach in the Balearic island of Mallorca, Spain May 20, 2022.
Image: REUTERS

"It was like out of this world, it was incredible, just incredible," she told Reuters on Tuesday. It was only the third time that a humpback has been seen around the Balearic Islands.

The weakened whale had been spotted by a ship about three miles (4.83 km) off the eastern coast of Mallorca, prompting Palma de Mallorca's Aquarium marine rescue centre into action. Spanish divers try to cut an illegal drift net off a 12-metre-long humpback whale, who got entangled in it near Cala Millor beach in the Balearic island of Mallorca, Spain May 20, 2022.
Image: REUTERS

They discovered the whale completely trapped in the red fishnet so it could not even open its mouth.

After initial attempts to cut the net from a boat failed, divers from Albatros and Skualo diving centres joined the effort and plunged into the sea to remove the mesh with their knives in a daring 45-minute operation.

"The first ten seconds she got a bit nervous, you know, like bubbles everywhere, but then I don't know, call me crazy but I think she knew we were there to help her and she just relaxed and we started working from the front of her mouth backwards," said Albatros owner Torras.

"We kept cutting and cutting and she kind of gave a little wiggle to get herself out of it," Torras said, adding that the mammal then stayed for a bit to regain her strength in the company of the four divers and even gave what looked like "a little thank you sign" before swimming off.

Nicknamed "walls of death" for the quantity of other sea life they catch in addition to the fish they are set for, drift nets were banned by the United Nations 30 years ago.

He has been identified as a foreign national, local media report.
News
1 month ago

Make tasty fish balls at home with these steps

Fish balls are rounded meatballs made from fish paste which are then boiled or deep-fried.
Sasa
1 month ago

They are not actual tears, it is just an augmented reality technology. Here is how to try it.
Sasa
1 month ago

The new design for the web has a close design to the mobile app.
Sasa
1 month ago

From bathing with underwear to sharing personal bathing effects, habits that ought to stop.
Sasa
1 month ago

If it has been less than 30 days since you initiated the deletion, you can cancel your account deletion.
Sasa
1 month ago

The feature will roll out to all users worldwide.
Sasa
1 month ago

A mouth-watering, spicy, and flavoursome Masala Egg Curry recipe that will perfectly spice up your lunch.
Sasa
1 month ago
“WATCH: The latest videos from the Star”
by REUTERS Reuters
Lifestyle
25 May 2022 - 08:41