Talking about traumatic events can be hard – but makes a huge difference to children's wellbeing.

•Talking about traumatic events can be hard – but makes a huge difference to children's wellbeing.

•A greater understanding of their emotions can, in turn, shape a child's behaviour. 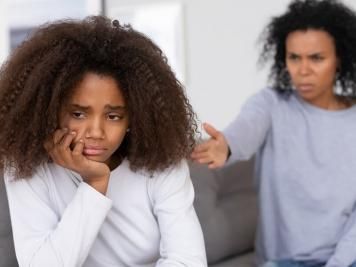 If a parent's primary responsibility is to keep their child safe and free from pain – what can they do when circumstances conspire against them?

Whether it's a death in the family, an injury or illness, or the threat of war, a child's guardians must not only manage their own feelings, but  also negotiate potentially heart-breaking conversations with young minds still struggling to make sense of the world around them.

Even seemingly remote news stories can lead to great anxiety and upset which needs to be processed as a family. But the stakes will be so much the higher if the child themself has been directly affected by the events.

Unfortunately, professional help may not be forthcoming. "For many kids, parents are the only people who will offer support following a trauma," says Sarah Halligan, a professor of psychology at the University of Bath, in the UK.

It should go without saying that love and understanding must be the foundation of these dialogues. But recent research suggests that the specific contents of these interactions, and the language that is used to frame the events, can also have profound effects on children's emotional processing.

Besides offering immediate comfort, family chat can shape a child's memories of what occurred when their minds return to it in the future and the ways that they will respond to later upsets.

Indeed, if you think about your own reactions to trauma today, it is very likely that you are repeating internalized conversations from your own childhood.

"Some people think that if they talk about negative events, they are going to traumatize their child or make it worse," says Melanie Noel, a professor of clinical psychology at the University of Calgary, in Alberta, Canada. "But having these difficult conversations can teach children empathy, understanding, and the ability to regulate their emotions."

It is now well established that parent-child interactions play a crucial role in all kinds of cognitive development.

"Children's brains are still developing, and parents provide important scaffolding and support to help children navigate their emotional worlds," says Dylan Gee, a professor of psychology at Yale University in Connecticut, US.

Right from birth, a child's attention will be constantly guided by cues from the adults around them. Sensing their parents' fear could help them to avoid a potentially dangerous animal or an untrustworthy person, for example.

As the child learns to talk, the caregivers' words will also guide their thinking and reasoning – with repercussions that go far beyond their knowledge of vocabulary and grammar.

Even the most casual chats can shape a child's memories, for example, so that they weave the details together into a narrative and start making sense of their feelings. After a trip to the hairdresser, a parent might ask how the child felt when the clippers buzzed over their scalp, and if they enjoyed the tickling sensation. Or they might ask if the child had been scared of the water spray. They may then say how proud they were that the child had been able to overcome their shyness, which reinforces the child's feeling of bravery.

This greater understanding of their emotions can, in turn, shape a child's behaviour, so that they put more thought into their actions without giving in to their impulses.

In the mid-2010s, Diana Leyva, a professor of psychology at the University of Pittsburgh, in Pennsylvania, US, filmed 210 parent-child pairs as they talked about positive and negative experiences in the child's life. During these conversations, some parents asked many more questions than others – and Leyva found that this could predict the children's behaviour at school a few years later.

Children who had been encouraged to delve into their feelings were better able maintain their attention and control their impulses in the classroom. Interestingly, it was the conversations about the negative experiences that seemed to make a real difference – perhaps because it is these uncomfortable feelings that are the hardest to understand and regulate, without the guidance from a parent.

Gee's own research has examined how families coped during the pandemic. She found that parents' emotion coaching buffered the effects of the stress during this difficult time, so that it had less of an effect on the children's mental health.

Given these findings, it is only natural that a parents' behaviour could have a powerful influence on children's responses to other kinds of pain and trauma.

A few years ago, Halligan's team recruited 132 families who had a child that had experienced a traumatic event – such as a car accident or a house fire – which had resulted in a hospital visit. In addition to answering various questionnaires, the parents and children were asked to engage in a recorded conversation about the event, which the team then analysed.

Halligan found that parents' appraisals of the event could predict the child's symptoms of post-traumatic stress six months after the event. (Importantly, this was true even after they had controlled for the child’s initial reaction to the event.) The worst characteristic seemed to be "catastrophic thinking", in which the parent focused exclusively on the threat and its potentially permanent influence on the child's life. In such cases, the child was more likely to have lingering symptoms further down the line. To a certain extent, the parent's doom-laden beliefs had become self-fulfilling prophecies.

This doesn't mean that caregivers should make light of the event or downplay the suffering. "It's important that parents do acknowledge what children have been through – they shouldn't pretend that this isn't distressing," says Halligan. "But we sometimes see parents enhancing how serious the event was." It was this exaggeration of the trauma and its effects that seemed to lead to worse outcomes, compared to families where the parent emphasised the child's ability to recover from the trauma.

Further evidence comes from Melanie Noel's research at the University of Calgary. In one experiment, her team recruited 112 children undergoing a tonsillectomy, or removal of the tonsils. Soon after the operation, each child rated the pain they were feeling (based on a picture-based questionnaire depicting different levels of discomfort). Two weeks later, the team then recorded a conversation between the parent and child describing the experience and their recovery – which were rated according to the level of elaboration and the emotional content. Finally, a month after the operation, the researchers again interviewed the child, probing their memory of the surgery and how much discomfort they had felt.

In general, more detailed discussions of the child's overall emotions seemed to help the child to make sense of the event. This was not true, however, if the parents focused too much on the physical pain that the child had endured. In these cases, the children remembered the operation, and their recovery, as being much more upsetting than they had reported straight after the surgery.

"Every time you talk about something painful that happened, especially with kids, you open that memory up to be changed and distorted," Noel says. "And some kids develop these scary, exaggerated memories."

That's important, she says, since abundant research has shown our memories of pain seem to shape our future experiences. If we remember an operation as being especially agonising, we will be much more anxious – and experience greater discomfort – when we next undergo surgery.

Noel and her doctoral student Maria Pavlova have now designed a short training programme on the best ways to have more constructive conversations. Parents are advised to avoid talking too much about the physical pain. Instead, they were encouraged to focus on the more positive elements of the experience and to praise the child for the ways they had managed to cope with their discomfort.

Consider, for example, an interaction in which the child remembers all the tears they spilled during the event. "I cried for so long", they say. While it's important not to gloss over that fact, the parent might try to remind the child how quickly they recovered. "Yes you cried, but only for a few minutes remember? Because then we got ice cream." The parent could then emphasise the kindness of the staff – and praise the child for having managed their pain with deep breathing. (You can watch a video outlining this advice in more detail, here.)

To test the benefits of this intervention, Noel and Pavlova once again recruited families with a child undergoing a tonsillectomy. After the operation, the parents were given a short training session. The intervention worked exactly as planned – reducing the child's tendencies to exaggerate their discomfort in later reminiscences – so that they formed more nuanced and realistic memories of the event.

Although the intervention was specifically designed to change conversations around physical pain, Noel suspects that reframing conversations in this way – so that they emphasise resilience as well as suffering – could help children to process many other kinds of trauma.

For any family processing trauma, one of the biggest challenges may be finding the right moment to initiate these conversations. Halligan says that some parents may try to avoid talking about the subject – even between themselves – in case the reminders add to the child's suffering. This could create the sense that the subject is somehow taboo. "Children can often worry that they'll upset their parents, so they become silent on the topic," Halligan says. In her opinion, it may be better to allow the topic to come up naturally.

Regularly asking child how they feel, in general, should give the child the space to talk about their distress when it is pressing on them. "You need to make sure your child knows that they can have the conversation with you and to provide those opportunities for that conversation in an active way," she adds. Even if the child does not talk about the trauma itself, they might chat about other stresses that could provide a good opportunity for emotion coaching.

Children may more be likely to open up while you are going about other day-to-day activities – such as a drive in the car or a walk in the park. "Parents often find good opportunities to talk to children when other things are going on," Halligan says.

If you then follow the suggestions inspired by the research – to validate the child's feelings, to emphasise the good alongside the bad, and to affirm the child's ability to cope – you may be equipping them with broader emotional skills that will last for decades to come.

"If we want to foster resilience in children, we need to teach parents how to have validating conversations with children about stressful, scary and traumatic things," says Noel. "It could prevent a lot of problems later on."

It was also associated with being overweight and obese. Do you have a regular meal time?
Sasa
3 months ago

How to react to a message with emojis in WhatsApp

Emoji can be used to show another person how you felt a certain way about their message.
Sasa
3 months ago

What happens to your body when you eat too much salt

For our body to function we need sodium in a moderated amount, for better muscle and nerve function.
Health
3 months ago
“WATCH: The latest videos from the Star”
by BBC NEWS None
Lifestyle
17 May 2022 - 13:50