Panic, threats during the census in S Africa

The questions make you feel like you are being interrogated 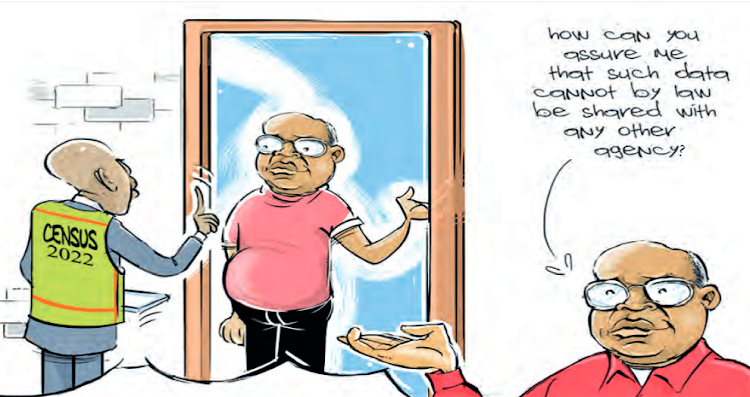 It’s census time in South Africa and, as is often the case across the continent, and the world at large, the counting process has been surrounded by controversy and no little amount of panic, at least on the part of the provincial government here in the Western Cape.

Even though in theory, we should all know that censuses are “principal means of collecting basic population and housing statistics required for social and economic development, policy interventions, their implementation and evaluation”.

First, the controversies. While generally, people are still quite happy to give away their personal information when participating in online quizzes on social media platforms, they become distinctly uncomfortable when the government wants to know some of the same stuff.

Social media quizzes, which are made to appear like harmless fun games to while the time away as you scroll through, will ask you some of the same questions the state will ask, but with a fun, frivolous element added to make it seem innocuous.

For instance, one of the classics, at least the ones targeted at me, is: “Your celebrity stage name is your mother’s maiden name plus the street you grew up on”.

People more knowledgeable about these things than I am will tell you that this could very well be a villainous attempt to harvest personally identifiable data.

However, many of the same people who often appear keen to respond to these things get their backs up when the government asks questions about sex, age and language.

Perhaps the serious way government officials pose the questions make it seem as though one is being interrogated. And the less you trust the government, for whatever reason, the less free you are willing to be with information.

This unwillingness to part with information on the part of the general public leads to the aforementioned panic by government officials and leaders.

For example, here in the Western Cape, it has emerged that the province is lagging far, far behind the rest of the country in the 2022 census count, and this has caused the census period to be extended. It was meant to wrap up at the end of April but will now continue until mid-May.

The count is conducted by a government entity, Statistics SA (StatsSA), and they said recently that those counted in the Western Cape stand at approximately 55.5 per cent, while the average number counted in the country stands at 87 per cent.

The panicked officials are, meanwhile, busy encouraging citizens to log on, arguing that if the count stays low, the province will be perceived to have a lower population than it actually has.

This in turn will impact budget allocations through things such as the Provincial Equitable Share (PES) and other allocations and resources raised nationally.

This realisation has caused the Premier of the province to come out with a statement urging people to get counted and pointing out that even if they had ignored the door-to-door census enumerators, those with access to the Internet could go online to the census portal.

As the Premier put it: “If we do not get an accurate census count for our province, we may have fewer resources available to deliver services in the future, which could impact each and every resident.”

I checked out the questionnaire and it did, indeed, appear to be quick and easy, taking up just about half an hour of my time.

As for worries about what will happen with all the data people are expected to give freely to the government, the head of the census operation in the Western Cape has been at pains to assure people that such data cannot by law be shared with any other agency.

But it wouldn’t be a proper African government if there wasn’t a threat accompanying the appeal. It would seem that households who “do not cooperate will be registered as having refused to participate, and the appropriate legal steps will be taken”.