Eid is one of the biggest celebrations in the Muslim calendar.

•Before Eid prayers, every Muslim is obliged to make a donation to charity called Zakat al-Fitr to help feed the poor.

•The month of Ramadan is the ninth of the year, and Eid is celebrated at the beginning of the 10th month, Shawwal. 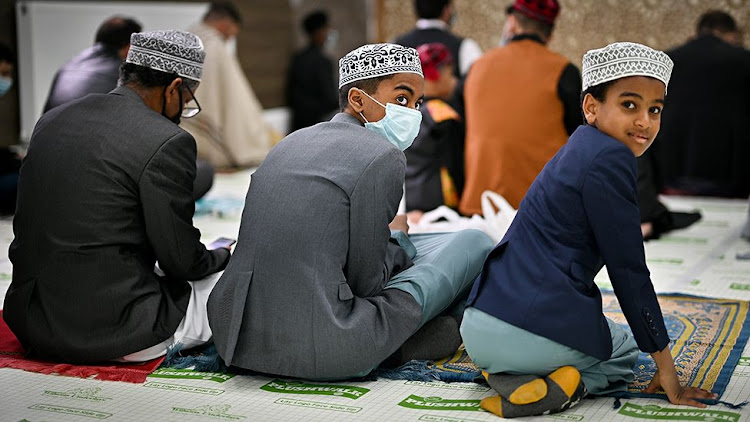 2021: An Eid prayer is performed by worshippers in Glasgow

Millions of Muslims around the world are about to celebrate the festival of Eid al-Fitr.

Eid - as it is more commonly known - is one of the biggest celebrations in the Muslim calendar.

What is Eid al-Fitr?

Eid takes place at the end of Ramadan - a month of prayer and fasting.

The name "Eid al-Fitr" translates as "the festival of the breaking of the fast".

Like the beginning of Ramadan, Eid begins with the first sighting of the new moon.

For most Muslims in the UK, this will be on the evening of Monday 2 May. What happens at Eid?

Many Muslims will attend Eid prayers at their mosque early on Tuesday 3 May.

In the Middle East, these are held straight after the Fajr morning prayer. In the UK, it's any time from 07:00 onwards.

It's a tradition to wear new clothes and on the way to the mosque, to eat something sweet, such as a date, and recite a short prayer, called a takbeer.

Before Eid prayers, every Muslim is obliged to make a donation to charity called Zakat al-Fitr to help feed the poor.

In many countries, Eid al-Fitr is a public holiday - many people enjoy large meals with friends and family.

It's also common for elder believers to give money to children and younger members of the family.

If you want to wish someone well at Eid, the greeting is "Eid Mubarak".

Ramadan is the Arabic name for the ninth month in the Islamic calendar.

It is considered one of the holiest Islamic months.

Observing the fast during Ramadan is considered one of the Five Pillars of Islam. These are five principles that Muslims believe are compulsory acts ordered by God.

Muslims believe that some of the first verses of the Islamic holy book, the Qur'an, were revealed to the Prophet Muhammad during the month of Ramadan. Extra emphasis is placed on reciting the Qur'an at this time.

Fasting is considered to be an act of worship, which enables Muslims to feel closer to God and strengthen their spiritual health and self-discipline.

How does this work in practice?

Muslims have an early morning meal before dawn, known as suhoor or sehri.

They break their fast after sunset for the evening meal, called iftar or fitoor.

Ramadan is also a time when Muslims are encouraged to give to charity, strengthen their relationship with God and show kindness and patience.

During this month, many believers also perform an additional night prayer called Taraweeh. This only takes place during Ramadan.

Is Ramadan back to normal this year?

Most Covid restrictions in the UK have now been scrapped, so many people have returned to normal practices - for instance, inviting friends and family over for iftar.

East London Mosque has been catering to more than 500 people every evening during Ramadan for iftar events and Taraweeh prayers.

Mosques - like other places of worship - are no longer required to enforce social distancing, although some people may prefer to maintain it.

How are the dates for Ramadan and Eid set?

The month of Ramadan is the ninth of the year, and Eid is celebrated at the beginning of the 10th month, Shawwal.

Each month begins with the sighting of the new crescent moon and lasts either 29 or 30 days.

In the past, this was done by the naked eye, but in recent years, telescopes and technology have been used.

Muslim countries are spread across a large geographical area, from Indonesia to Morocco, meaning that some Muslims may see the new moon earlier than others.

"Traditionally, Makkah [Mecca in Saudi Arabia] was the center of sighting the moon," says Prof Muhammad Abdel Haleem, from the Centre of Islamic Studies at London's SOAS (School of Oriental and African Studies).

"Sometimes even in the Middle East, neighboring countries will say they've seen the moon on different days," he says.

The lunar calendar is about 10 days shorter than the Western calendar, which is based on the cycle of the sun. This means that each year Ramadan starts about 10 days earlier than the previous year and over time gets earlier and earlier in the year.

Who fasts during Ramadan?

Fasting should only be done by people who are in good health.

Some Muslims are exempt:

Although Eid al-Fitr has become a well-known event in the UK, this is not the only Eid celebration in the Islamic calendar.

Eid al-Adha is celebrated during the month of Dhul-Hijjah. This is the month when Muslims from across the world make the pilgrimage to Mecca known as Hajj.

The Chief Kadhi Ahmed spoke in Mombasa on Sunday evening.
News
7 months ago

Form One reporting date changed to May 4

This is by dint of Tuesday, May 3 being declared a public holiday to mark Eid al Fitr.
News
7 months ago

The discovery was made by a farmer digging his land in Khan Younis, in the south of the strip.
News
7 months ago

What you should know about Ramadan