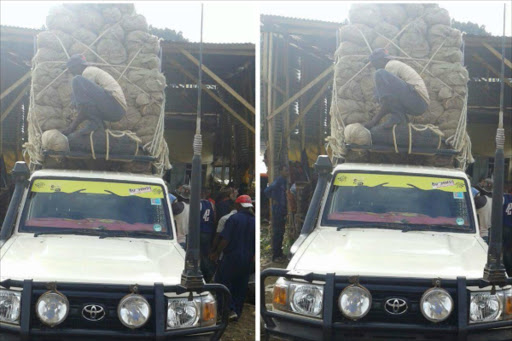 A pick-up is loaded with miraa at Maua in Meru county
Image: COURTESY

Ask any person to describe a miraa driver and the answer you're most likely to get is: a knucklehead.

The folklore surrounding these drivers is that they are speed freaks and road bullies, whose reckless ways of driving puts the lives of many road users in danger.

Personally, I had never seen a miraa driver in action until February, when I travelled to Meru. Our journey back to the capital was spiced up by the occasional sight of Proboxes whizzing past us as they ferried the precious green gold to the city.

The way these cars expertly switched lanes and disappeared into the horizon, leaving behind a cloud of dust, you'd think the drivers must have started out as rally drivers before switching careers.

Nonetheless, motorsports activities are often held within safety parameters to ensure no life is lost, let alone injured. For miraa drivers to apply safari rally tactics on busy roads used by other people is an accident waiting to happen — literally.

However, in their defence, miraa drivers' speedy habits are informed by the fact that the commodity they ferry is perishable and needs to get to its destination as fast as possible.

Miraa is a cash cow for many farmers who export it to other countries, such as Somalia. Due to strict timelines for international flights, drivers are always in a hurry to get their miraa to Wilson Airport as soon as possible.

A close friend also tells me that most of these drivers drive at ungodly speeds to ensure the produce remains fresh when it is blown by the wind. Without that, the miraa would go bad due to the heat.

Regardless of where you stand concerning miraa drivers, it is undeniable they are unique to the Kenyan transport system.

Love or hate them, they are here to stay... Unless the government launches a crackdown akin to that against rogue boda boda.

Toyota Proboxes: Boon to drivers or social menace?
Post a comment
WATCH: The latest videos from the Star
by KEVIN ONYATTA
Lifestyle
20 April 2022 - 12:05
Read The E-Paper