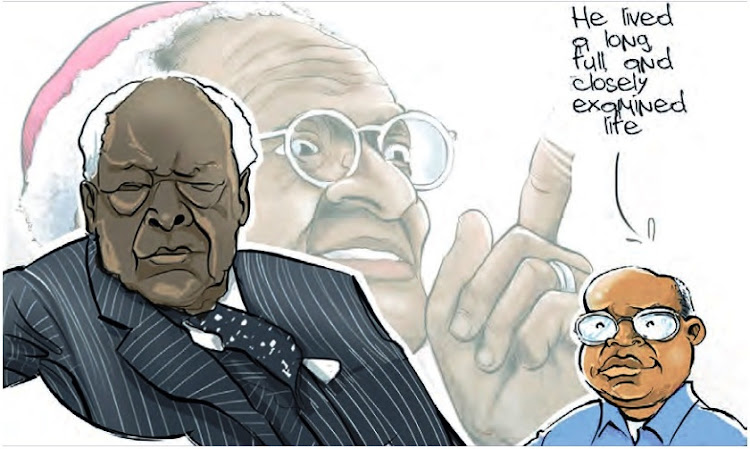 After a week reporting on the life, death, funeral arrangements and Requiem Mass of Archbishop Emeritus Desmond Tutu, I awoke one Saturday morning to WhatsApp messages from Kenya, informing me Charles Njonjo had also shuffled off this mortal coil.

Turning to my social media networks on Facebook and Twitter, I was immediately confronted by the expected knee-jerk reactions that happen, especially when controversial figures from history die.

These instant assessments of people’s lives run the gamut from A to Z as far as people’s feelings are concerned, from hatred and bitterness to adoration and all the ambivalence in between.

Hard as I try not to get swept up in the moment of such reactions, I have found I am not immune, and often have to fight the urge to react just for the sake of reacting. I don’t always win.

In South Africa, such reactions have become controversial and have divided the populace not just by race, which can sometimes seem to be a default division setting here, but by age as well.

These instant evaluations of historical or even merely newsworthy figures have always happened, they just seem to be more evident in this era of “in your face all the time, hoping to trend” social media.

We live in a period in history where everyone has a view that is just dying to be expressed and that will be communicated no matter how little thought has been put into it.

I have been thinking about such reactions for a long time, and I think when former President Daniel arap Moi died in 2020, I alluded to them in my column of the time.

However, following Tutu’s death, the South African journalist, author and broadcaster Eusebius Mckaiser wrote an analysis that brought this whole issue to mind for me again.

He wrote: “Within minutes of the announcement of Tutu’s death, social media saw a proliferation of both complex, lengthy sets of reflections about his legacy and also, perhaps inevitably, reductive hot takes.

“There is no one Tutu. How could there be? He lived a long, full and closely examined life — a life responding to social and political facts that themselves did not remain constant.”

As far as I am concerned, these words could be said about any of the aforementioned historical characters, including Charles Njonjo.

There are those who would disagree, and while they have every right to their own opinion, this really is not about them.

I grew up in the Kenya of the 1970s and 1980s, when Njonjo was a political force to be reckoned with and one word from him whispered in the ear of President Jomo Kenyatta and after him, President Moi, could seal a person's fate for better or for worse, usually worse.

In those days, Njonjo, who was Attorney General and later Home and Constitutional Affairs minister, had influence with the judiciary, the police, the Special Branch, the civil service, the banks and immigration.

Kenyans who had not been particularly aware found out just how this influence was used during the judicial commission of inquiry appointed in 1983 by President Moi after the two erstwhile friends fell out with each other.

I have no doubt in my mind Njonjo’s perspective of life and the part he had played in the downfall of many of those who crossed him or with whom he disagreed politically or ideologically, changed during and after the commission.

I can write this because I am aware that he reached out to certain people I know in a bid to make what amends he could. Some of them accepted the apologies, others rejected them outright, and still others were ambivalent.

Dying three weeks shy of his 102nd birthday, Njonjo outlasted most of his friends, enemies, acquaintances and detractors, but there are still some of us left to remember him.

How much Njonjo spent on London suits