Association has planted indigenous trees in 2,000 acres of the forest destroyed by encroachment, charcoal burning and gold mining activities 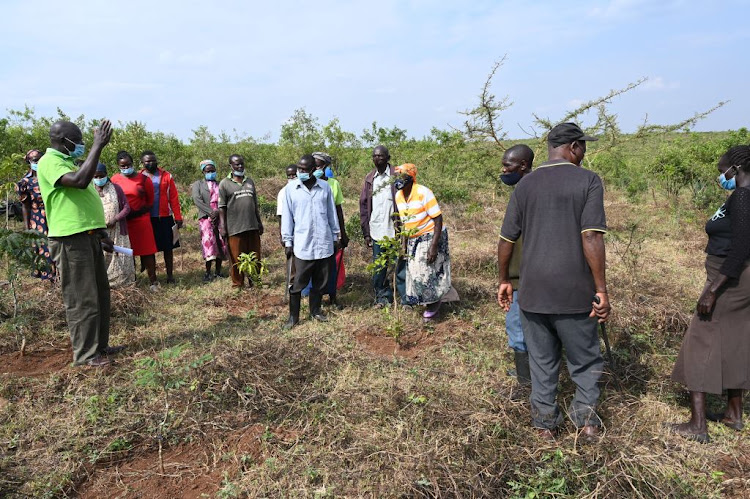 As the midmorning suns rises over Mirema hill, several members of the community are hard at work weeding indigenous tree seedlings.

Members of the Mirema Community Forest Association started in 2018, have been keen to restore the 2,000-acre indigenous forest dilapidated by encroaching, firewood, charcoal and gold mining activities in the past.

The association chairman William Odhil said officials from the Kenya Forest Services previously had a hectic time trying to chase away encroachers and restore the forest as the community was actively against it.

“We used to have wild animals like rabbits and small antelopes in the forest but with time streams and water catchment areas disappeared completely with residents downstream suffering perennial floods,” Odhil said.

With constant clashes between encroachers and government officials, sand and gold miners descended on the forest which completely wiped out tree cover.

“Officers from Kenya Forest Service took a different approach of not using force and started to directly engage us to see the benefit of having the forest and how best we can help conserve it as a community which saw us form the association,” Odhil said.

The community started off by preventing any further and new encroachment and started moving those who had taken residence and were cultivating in the forest.

“We started meeting each Monday, Wednesday and Friday of the week and started building indigenous tree seedlings which we sold to organisations which hired out blocs in the forest in their afforestation drives,” Dora Mboya, a member of the association said.

The association said for the past three years they have managed to propagate and restore 210 acres of land, about 10 per cent of the entire forest through the help of private and public entities.

“We only call on government to officially gazette Mirema Hill as official forest cover, because in this short period we have seen wild animals back, streams and water catchment areas restored with erosion stopped,”  Mboya said.

The Nyatike Forest Officer Ronald Augo said through the community, they have been able to steadily conserve the forest cover with organisations finding it easier to adopt blocs for conservation.

“Organisations like Equity Bank buy seedlings from the association and hire them to plant and take care of them, so it is a win-win situation for conservation efforts,” Augo said.

World Vision project manager Charles Odhiambo said the hill has been a water tower and they are sure within a decade they will help restore the forest.

“To quickly and naturally grow the forest we have started an enriching programme which involves weeding in affected area and this has seen indigenous trees and animals restock naturally,” he said.

“After only three years of conservation, the association now plans to start bee keeping projects in the forest, there is access to clean spring water for their animals and have been key in policing,” Odhiambo said.

In 2005, the Forests Act created formation of CFAs which devolved management of forests to communities.

In 2009, Charles Koech and others in a paper ‘Community Forest Associations in Kenya: challenges and opportunities’, a research published Kenya Forestry Research Institute, said most CFAs are formed by constitution formed by consensus from members.

Funds are derived from members' monthly contribution apart from work done and proceedings from forests.

“Major challenges included lack of transparency among officials, failure of some members to contribute funds, sharing of benefits, and a dictatorial tendency among some of the leaders,” the report said.

A youth group has partnered with Equity Bank to plant 100,000 mangrove trees at Tudor Creek.
Counties
1 month ago

Praise President and Raila for leading efforts to restore all water towers.
Counties
1 month ago

President called for open spaces to be reclaimed and conserved in the capital.
Counties
1 month ago
by MANUEL ODENY
Lifestyle
07 January 2022 - 22:00