Whatever happened to the very first Christmas gifts?

What if Joseph squandered them like a tea farmer at bonus time?

• The gifts were beyond extravagance for a family of Joseph's stature 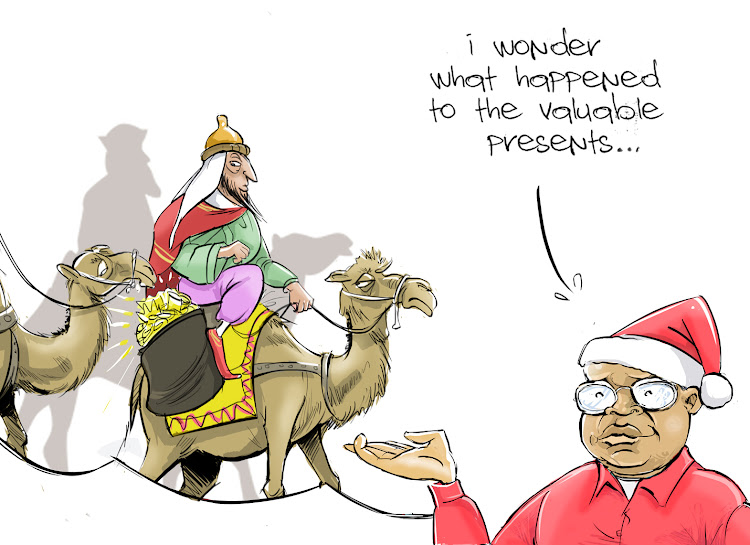 It's that time of the year when people give gifts supposedly to emulate the Bible's three wise men.

I don't know about you, but I've always wondered what happened to the very valuable presents that they brought.

Those who know their Bible stories will confirm that Mary and Joseph were quite poor, even by the standards of their day.

For example, when they brought Jesus into the Temple in Jerusalem to dedicate Him according to the ancient Jewish Law, they could only afford two doves for their sacrifice — the amount allowed only for the poor, at least according to the instructions in the book of Leviticus.

According to the Gospel of Matthew, the wise men brought gold, frankincense and myrrh to the newborn.

Gold, of course, was valuable as currency. Frankincense was an expensive perfume. Myrrh was a precious ointment often used in the burial process.

A US clergyman, Dr Clay Smith, wrote: "To a carpenter's family, even if they came from royal blood, these gifts were beyond extravagance.

"Joseph probably never before held gold in his hands. Mary only would have caught a whiff of frankincense if she brushed against a wealthy person passing through Nazareth. Myrrh was for the burial of the rich and the powerful, not the poor."

I always found it odd that no more is said of these gifts.

There are fables, not in the Bible, about the gifts, such as the one about  the thieves crucified with Jesus having stolen the gold or of Judas having been made custodian of the gifts, selling them and pocketing the money.

Another tale is that Joseph used the presents to finance the family's flight to Egypt.

This is a sensible suggestion, but perhaps too sensible.

By the way, if you are a person of faith who gets offended when people re-imagine Bible stories and characters, please stop reading here.

I'm warning you that if you don't have an open mind, what follows next might be very upsetting.

What if Joseph, like a tea farmer at bonus time, decided to squander the valuable gifts?

Could this even be the reason he's not mentioned again in the Bible stories, save for the escape to Egypt?

Let's face it, lots of biblical heroes had messy lives, so why not Joseph?

Noah got drunk; Abraham lied about his wife; Isaac tried to give God’s covenant blessing to the wrong son; Rahab was a sex worker and Samson was a womaniser.

Joseph's own great ancestor, David, had an affair with a married woman and had her husband murdered as a cover-up.

Jesus himself used his first public miracle to turn a teetotal wedding into a thorough booze fest.

So what's to stop Joseph from having blown the cash from the gifts? Perhaps he was still feeling hard done by over the issue of discovering his wife was pregnant and not by him.

The Bible says it was only after marrying Mary that Joseph found that she was already pregnant.

However, being "a just man and unwilling to put her to shame", he decided to divorce her quietly.

In those primitive days, divorce for such reasons would have led to the woman being stoned to death.

The story goes that an angel visited Joseph and convinced him that the child Mary carried was the son of God and was conceived by the Holy Spirit.

But you can imagine despite these celestial assurances, Joseph was still somewhat doubtful but decided for the sake of peace he'd say and do nothing.

Then while they've gone to their ancestral home to be counted in the census, the baby comes and three very rich strangers come to drop off gifts for the baby.

Surely at this point, it's possible he might have wondered just what the heck he'd gotten into and taken matters into his own hands.

After all, he was just a man.

Gift that she will wear with pride
by Mwangi Githahu Columnist
Lifestyle
25 December 2021 - 10:00