The agony of Kenyans travelling through Christmas

Kenyans have to pay double the usual amount you usually pay when going upcountry.

• You have to worry about your bags going missing, having to scramble for a vehicle, and the possibility of getting pickpocketed in between.

• When you finally board one there’s the agony of weathering traffic jams so as to get home. 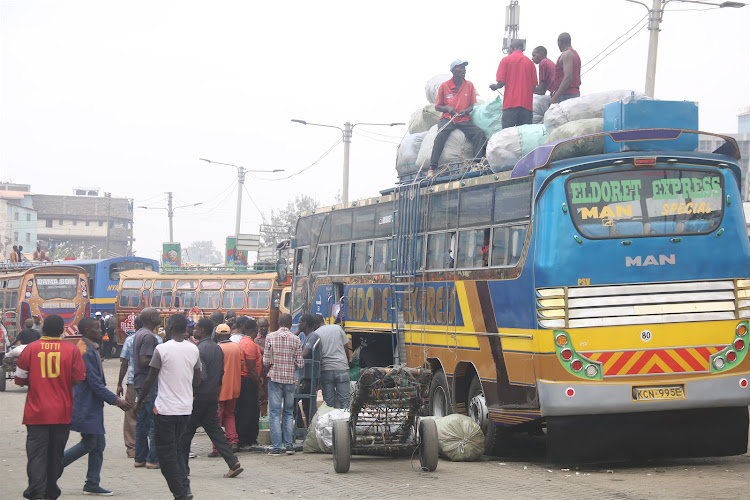 It’s that time of the year again.

Yes, the jolly part counts but I’m talking about the part where you not only have to wake up at the 'witches' hour if you wish to travel.

But also have to pay double the usual amount you usually pay when going upcountry.

And if that’s not enough, you also have to worry about your bags going missing, having to scramble for a vehicle and the possibility of getting pickpocketed in between.

And lastly, when you finally board one there’s the agony of weathering traffic jams so as to get home.

That’s assuming you’re not travelling with toddlers or children.

As things get more hectic then.

But year after year none of this deters Kenyans spirits when it comes to travelling upcountry for the holidays.

Even during a global pandemic or even when they’re only going there for two days.

Some plan ahead and travel earlier while some opt to sacrifice Christmas and travel later on to go celebrate the New Year with family.

Through it all, we’re compelled to call people in the travel sector greedy and we’ll launch names at them, then proceed to try bargain the prices with them to no avail.

In as much as we adore the holidays and the thought of being around family and wholesome meals is warming, the thought of travelling past the 20th makes one rethink how badly they miss the family or how much they need that holiday.

Take, for example, going to Meru.

But during the holidays the fare skyrockets to a whole Sh1,500 from December 21 or 22.

On the 24th they might charge Sh1,600 or Sh1,800 because they know how desperate individuals are to travel.

On a normal month, that’d have been the fare to and fro Meru and you get change to buy water along the way.

But not during the beloved holidays.

It’s not only long-distance places that play this daylight robbery.

Nairobi to Nakuru, which is roughly a three-hour journey, people usually pay Sh350 but during this time frame the fare is set at Sh800 without any mercy or shame.

Coincidentally this madness doesn’t take a toll on people travelling to the upcountry only.

People left in the city suffer as well.

Most vehicles want a part-time in making this extra money so they’ll stop going along their usual routes like from Nairobi town to Gachie where people pay Sh70 and take on the trips where the big money is at.

So the people left behind have to hustle to get home and their fares are also subject to getting hiked because the demand is high and the supply is limited.

But why should we complain our leaders take advantage of us all year long and we don’t bat an eyelid.

So I guess that’s why it’s okay for some Kenyans to milk us on specific days of the year.

We’ve accepted it, we get off days a day to the big day.

We pack, head to the stage and scramble for vehicles and pay up the money required.

Will things ever change? Only time will tell.