Maroon Commandos: Mastering the art of music and war

• For 51 years now, the band has informed and educated society, motivated soldiers 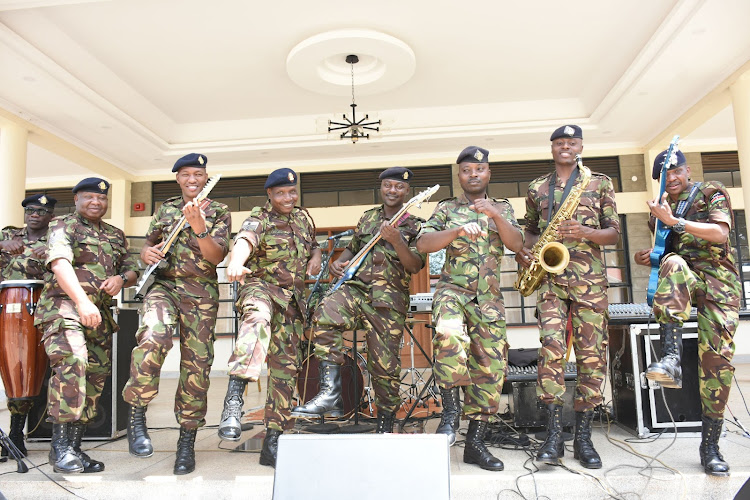 Senior Sergeant John Ogega, alias Magneto, 51, has learned the art of war and music. His love for music and the battle to keep that fire alive started when he was a small boy in Migori.

“The crazy thing is there was no parent, in that era, who would allow their children to dabble in music as a career, which was unheard of,” Magneto said.

But for him, music was so ingrained in his daily life that even in the playground, if he found a piece of wood, he would carve it into music notes.

Other times he would take maize combs and fashion music instruments from them. He would strum the instrument and hear the sound from it and his heart would be full.

Getting into music as a career was at one's own risk. In Magneto's case, he just did music despite the disapproval from his parents. “There were days I would get a beating, and if I showed up in the house with my wood carvings and handmade music instruments, they would be thrown into the fire and burnt to ashes.”

Despite the numerous fights with his parents, music had won the war in his heart. Since talent is intrinsic, he says, you cannot stop it; you just find yourself drawn to music and its activities.

He knew the love of music coursed through his veins and had taken permanent residence in his heart from how he would perceive music growing up. Other people would listen and enjoy, but for him, the feeling was different. The way it spoke to him was deeper than most. That is when he made the decision that music has to play a role in his career, somehow.

That dream was fulfilled when Magneto joined the founding team of the Maroon Commandos years later, and now, 51 years later, the band is still in existence as the longest-serving military band in Kenya. 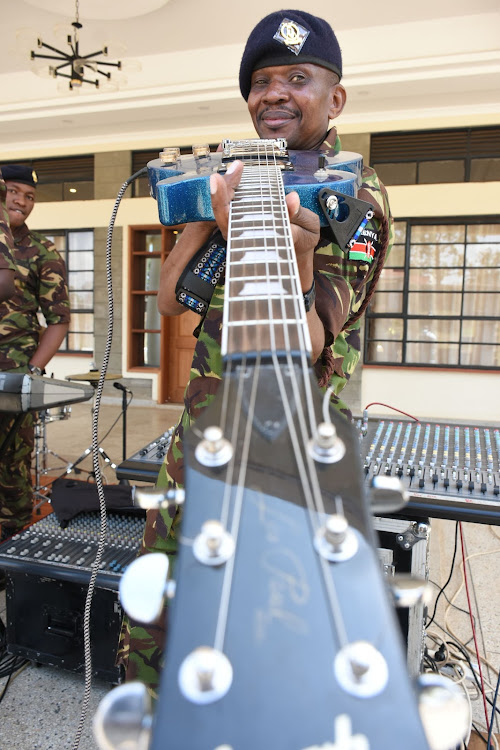 HOW IT ALL STARTED

Maroon Commandos' Band journey started in 1969, when the first Commanding Officer of 7th Battalion Kenya Rifles, Lt Col J M Wambua, came up with the idea of forming a music band within his unit as a way of improving the performance of his Drum Platoon.

The unit was then based in Gilgil. The CO then tasked the Adjutant, the then Captain Muchemi, to search for young men to be recruited to start the unit band. It was at Bamboo Executive Night Club along River Road that he met Habel Kifoto and his band crew.

The then band members, Habel Kifoto, David Kibe, Juma Kizito, Ibrahim Ringo, Shem Shisia and Tony Sobayeni, had a closely knitted relation that sprung from the fact that their fathers together worked for the Kenya Railways Corporation and lived in the railway quarters of Makongeni, Kaloleni and Shauri Moyo. 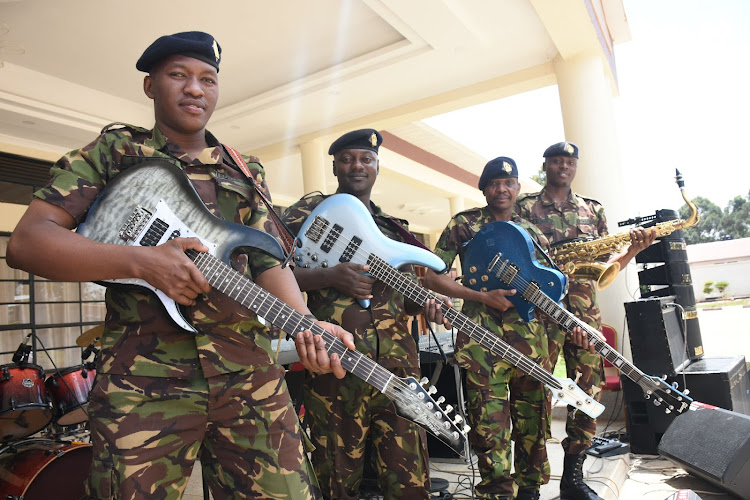 The band’s lead singer and saxophonist David Kibe narrated in his YouTube Channel how his dream to advance his music career started with the chance meeting with Muchemi.

“We were impressed by that and for us, it was an opportunity that presented itself at the right time,” he said.

"We moved from Nairobi to Gilgil, where the 7KR Batallion unit had just been established. The group took the name Maroon Commandos, which was the colour of the battalion and commandos as we all know were the people who can do tasks that are naturally not easy."

They took it upon themselves to create good music because the army provided a livelihood for them and time for practice. They were young and yearning to get ahead in the world of music. At the time, their rivals or people they looked up to were Tabu Ley, Franco and in Kenya, there were renowned stars like Joseph Kamaru and DO Misiani.

Kibe gave the backstory of the hit single 'Sitaki Uniambie'.

“I was very young when I composed the song. At the time, women and love was the main theme, it was partly a true story and partly an imagined scenario,” he said.

“The song is about a lady you love but every time you meet her, she says she is in a hurry. So, I’m telling her, she is hurting me.”

Kibe served for 15 years as a commissioned officer and in total, he had 36 years in service.

“I want to impress that the moment people realise that music is an art form that can uplift the name of a country, they will treat musicians differently because it works like any other,” he said.

“When you hear that this is a musician, there is a tendency to downplay them like those are just thugs. But I know now that things have been transformed, it is not like it was back then. You will find there are many musicians like Nameless who also have degrees.” 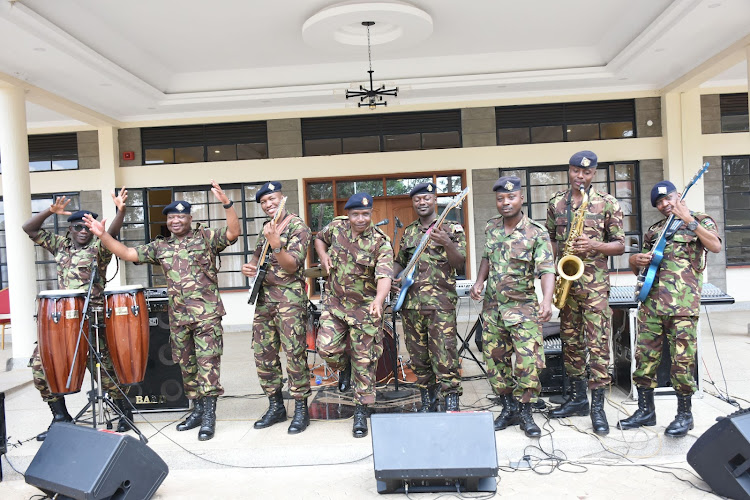 We have played for all the presidents and we have learned the art of music and how to entertain them. We always know what they like

The band has played for all four Kenyan presidents.

“We have played for all the presidents and we have learned the art of music and how to entertain them. We always know what they like,” Magneto said.

“They love several songs that they always request, like 'Uvivu', 'Kenya Inchi Yangu', and once we got a request for Mpongo Love’s song, 'Ndaya'.”

Lt Col Nyamooh Kasaine, the commanding officer 7KR Battalion said, "The longevity of the band can be attributed to sound management and the location of the unit in terms of the performance and the kind of music the band has been playing, which has been resonating well with the audience."

Music, military and war: how does that gel into a working combination? Kasaine said, "Music within the military, just the same way out there, educates, informs and entertains. And to us, it is more for motivating the soldiers and in rallying the troops."

His favourite songs by the band are 'Christina', 'Sophia' and 'Sine Ndoe'.

The band has been very instrumental in passing the national government message on containing the Covid-19 virus. They spread the Ministry of Health guidelines through rhumba and reggae corona songs.

Explaining what role music played for him when he was deployed and had to perform his army duties, Magneto said, “Even now, if you have anything that stresses you, the first thing you think of is music. For us when we are out there, music plays a big role because it soothes and calms us.”

Piracy poses a threat, seeing as their music catalogue is huge and full of hit songs.

“When the digital era started, piracy hit us very hard,” Magneto said. “However, the upside for that was that our music went further and got a new audience by virtue of social media.”

Magneto said the band members does not have internal differences.

“We follow orders. It is very hard to have differences. Have you ever heard of the army having infighting? Very hard,” he said.

“We are disciplined forces and there are structures. The thing with that is that once you follow, it is easy. This plays a very big role in ensuring that internal strife and arguments are avoided.”

The same applies to on-stage performance chemistry. Everything they do is teamwork. They take rehearsals seriously and they have deep pride in being the leading band in the country and the region.

Maroon Commandos also has female band members and also embraces civilians as part of the band.

So how do they deal with women and alcohol, perks that musicians enjoy?

“If you love something, don’t overdo it or let it destroy you. Do it in moderation. When we go out, we are in the civilian world and for us, that is work and due to our discipline, we know we are there for work,” Magneto said.

“And if anything happens, the military police deal with it. That is how serious it is. At the end of the day, we are army guys, and there are many aspects to that like security, so we take great care about such things.”

Magneto concluded by reflecting on where he has come from. "The amazing thing is, as a young boy, you always have dreams of your future. I dreamt of three things,” he said.

"I dreamt of joining the military. I dreamt of being in the music industry and the third was to be a teacher. Of the three, I have achieved two. Looking back now, I can’t help but think that dreams do come true."

Classic that propelled him to fame will finally get a music video
Sasa
11 months ago
How coup crackdown ruined the lives of Air Force officers
by GRACE KERONGO Sasa Editor
Lifestyle
05 November 2021 - 05:00