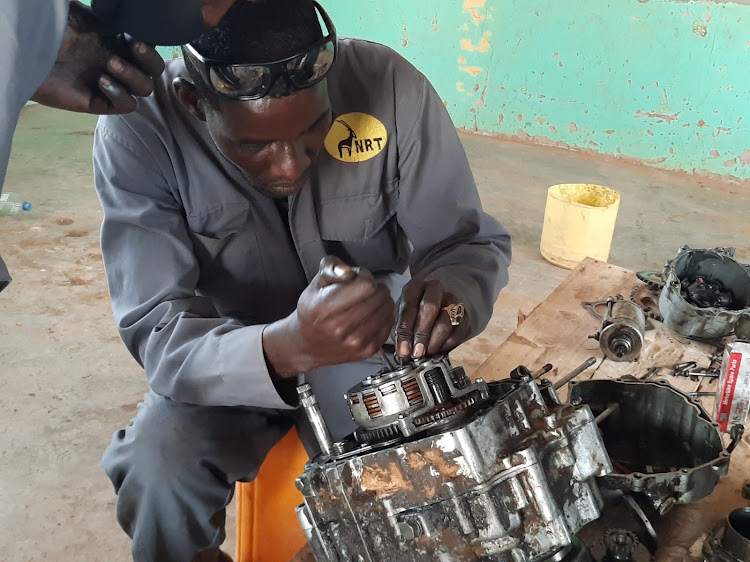 Hussein Barako, student of mechanical engineering at the Ujuzi Manyatani programme, repairs the engine of a motorcycle
Image: HESBORN ETYANG

More than 700 youths have received vocational training from the Ujuzi Manyatani programme in Isiolo county. The USAid-funded programme is being implemented by the Northern Rangeland Trust (NRT).

The programme aims to enable youths to earn a decent living through employment and self-employment.

“It has sponsored five courses in Isiolo that have been developed to target uneducated youths in pastoral communities who have had the least access to formal education,” he said.

The Ujuzi Manyatani model has been lauded for its flexibility as it is tailor-made to enable pastoralists to acquire practical vocational skills. Training facilities are provided without disrupting their way of life in their neighbourhoods, Boru said.

He said since its inception in 2019, at least 700 morans have graduated from the programme with courses ranging from catering, hairdressing, tailoring, motorbike repair, welding, mobile phone repair and masonry.

He said training is offered free to youths and they are only required to pay a fee of Sh3,000 for lunch.

Jackson Elupe, a former moran from Nakuprat conservancy, said most youth who could only engage in boda boda business and herding cattle are now quickly adapting and acquiring technical skills despite being uneducated.

“The youths used to contribute to insecurity in the areas as they used to engage in cattle rustling. Drought and rustling, however, had slowly made livestock keeping become unreliable,” he said.

“In pastoral counties like Isiolo, many uneducated youths who have never attended formal classes are left without skills, which contributes to high rates of joblessness, leading to cattle rustling and insecurity,” Elupe said.

Leketi Lemungesi, who is about to graduate from the programme as a motorcycle mechanic, expressed hope that he would not be returning to the bush, where he used to herd cattle. Instead, he could be headed to opening a garage in his village.

Amina Abduba is one of the women who has also decided to join the training despite her age.

“The county government should come in and partner with the development partners to see that the skills are beneficial to the students after they are through with the training,” she said.

Nakuprat conservancy manager Michael Lepalia said the education is more practical-oriented to help youths who did not attend classes capture the skills.

These are fuelled by cattle rustling, which she blamed on low levels of education and joblessness among the youth.

“The Ujuzi Manyatani programme has brought together youths from these localities and helped them work together, which I believe is a good ingredient to bring peace in the area,” she said.

Statistics from the government TVET department show that more than 600,000 students attained their Form 4 certificate last year alone. More than 70 per cent of these graduates ended up in vocational training institutes.