What's causing your car to vibrate

What's causing your car to vibrate

•Vehicle manufacturers ensure that all foreign noises are dampened as much as possible leaving the occupants to enjoy the ride without worry. 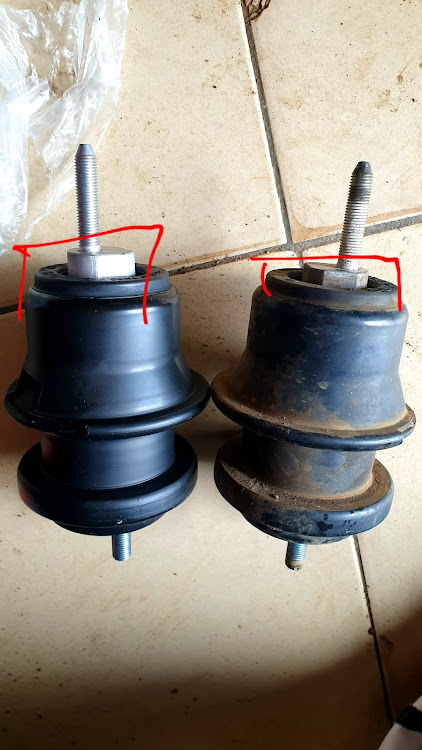 Engine mounts. Some of these vibrations come from the engine and gearbox.
Image: BOOSTED AUTO

Explosions produced by expanding gasses inside the combustion chambers of an internal combustion engine and the rotary oscillations from spinning shafts and disks have proven to be a menace in most vehicles on the road. Most car owners find it difficult to identify these vibrations and their main causes. Today, we learn how to effectively pinpoint these problems.

By all means, vehicle manufacturers ensure that all foreign noises are dampened as much as possible leaving the occupants to enjoy the ride without worry. However due to wear and tear and bad road conditions many things are bound to happen which in turn affect the smooth operation of vehicles on the road, bringing foreign noises and vibrations which cause havoc to the vehicle.

Some of these vibrations come from the engine and gearbox while others come from other systems of the car particularly the rotating parts. Below are some of the vibrations and their possible causes.

The engine's construction has ways of ensuring a reduction of the vibration, counter-balances and vibration dampers both hydraulic and mechanical ensure that most of the noises are reduced tremendously. Even though it is not possible to muffle out every noise and movement, a special rubber material called engine mounting is used to suspend the engine from resting on the chassis frame.

Depending on the engine design, several mountings may be used to support the engine off the chassis frame. Naturally, the engine is coupled to the gearbox and they are joined metal to metal; the gearbox must also be suspended using gearbox mountings or else it will transmit the vibrations to the chassis.

When any of the mountings is worn out, a vibration will be felt from the start-up even before the vehicle starts moving. The noise becomes too much on acceleration and upon driving the car. It is sometimes hard to tell exactly which mounting is worn out unless a physical check-up is conducted.

Most cars use rectangular shape mountings which are easier to see when disintegrated while some newer generation cars use collapsable bottleneck type engine mountings which are not easy to notice when worn out due to lack of physical damage. The bottleneck type only collapses making them a good media for transmitting the vibrations from the engine to the vehicle body. Sometimes one may change several mountings and the vibrations fail to go away due to the use of counterfeit mountings manufactured with hard rubber material that does not cushion any noise. Always use the recommended engine mountings by your manufacture.

All propeller shafts are balanced before fitting on the car. That's why every propeller has small weights similar to those put on rims during balancing. This means that every time a propeller is disassembled for any reason, it must be marked. Failing to return it in the same position as the initial one may cause a torsional imbalance that could result in the vehicle vibrating from its centre towards the rear. This vibration may only be felt at average speeds of between 50 and 80km/h

The most sensitive part of the propeller is the universal joints. Lack of regular greasing causes the joints to work under duress prompting misalignment and throws them out of axis hence none stop vibrations.

The bolts coupling the 2 faces of the propeller may also result in vibration when not properly tightened. Worn out centre rubber on the propeller also contributes to weird vibrations.

Cars with front driveshafts are notorious for hard to find vibrations. Most people may argue out that a worn out front driveshaft will only produce tac sound while cornering. That's right, but then again be informed that a worn-out constant velocity(cv) housing will push in and out the ball bearings forcing the cage to get displaced hence producing vibrations that are noticeable even at slower speeds. This is very common in vehicles that have fitted heavy-duty lift springs. The excessive lifting of the car alters the angle of the shafts on the cv joint which somewhat causes misalignment hence vibrations on rotation.

This is slightly different from a vibration instead, it is more of a humming sound but when it is in excess it may cause a vibration on the steering wheel. probably you have heard a lorry or matatu at high speed you hear as if it has a second engine at the back that is seemingly louder than the actual engine. That's the sound of a dead or dying differential.

In a small car, the sound is almost similar to that but now with a bit of a grind. From experience when driving on the road, for the cars with three quarter(3/4) floating bearing(all the small cars up to SUVs) if the humming sound comes from the front left, chances of a worn-out front right(opposite side of the sound) bearing are very high. I tend to associate it with the refraction of sound. Sometimes hoisting the car up and driving it from the hoist gives a definite location of the humming sound ie the differential or the exact wheel bearing.

For the vehicles that use semi-floating and fully floating wheel bearings(4X4s and lories)  the sound may not be heard easily but wheel flap will be rampant.

With the front control arm bushes worn, whenever the driver tries to accelerate or brake, the entire control arm gets into oscillations that take time to get back to normal. This should not be confused with the kind of vibrations from a warped disk. A warped disk will have your brake pedal kicking back in quick succession whenever you step on it. This is very different from worn-out bushes oscillations because in this case, it is the entire control arm that tries to move forward and backwards without kicking the brake pedal back n forth.

Rims and tyres need static balance regularly. This is associated with hitting the potholes at high speeds which usually bend the rims or deform the tyres hence affecting the rotational balance.

The writer is the owner of Boosted Auto repair shop.