Naomi Campbell: Supermodel who fell in love with Kenya, Africa

Having made Malindi her second home, her ambassador role was 'perfect and timely'

• Even before envoy deal, Campbell had been visiting and promoting Kenya for decades

She tells everyone who calls her how wonderful Malindi is and showers her 10 million followers on Instagram with pictures and videos of the Kenyan coast. https://bit.ly/3iY4XHV 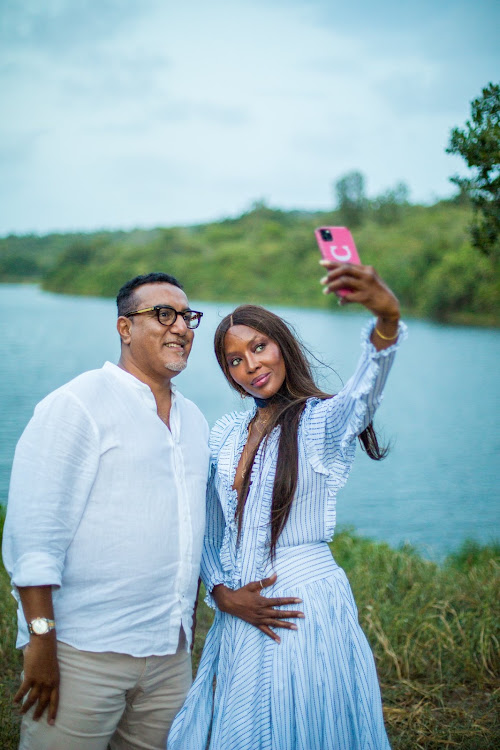 She tells everyone who calls her how wonderful Malindi is and showers her 10 million followers on Instagram with pictures and videos of the Kenyan coast. For two decades, British supermodel Naomi Campbell has been promoting the country without being asked.

So it came as no surprise to tourism players when she was appointed Magical Kenya ambassador, a role she has taken up free of charge. "She does it from the heart," one hotelier put it.

Kenyans unaware of this were quick to lash out at the lack of a local face, but tourism players urge them to relax, and say 'overlooked' celebs should feel free to use their influence to promote the country as well.

Campbell recently concluded her month-holiday in Malindi, one of the longest since she began visiting the resort town more than 20 years ago.

This time, as is her routine, she stayed at the exclusive Lion in the Sun resort, owned by her ex-boyfriend, Italian billionaire Flavio Briatore.

Her long stay earned her an ambassadorial job for Magical Kenya after a meeting with Tourism CS Najib Balala at the Vipingo Ridge in Kilifi.

The decision by Balala sparked mixed reactions on social media, with some users, including politicians, criticising the choice of appointing the British supermodel instead of Kenya's own international movie star Lupita Nyong'o or other popular celebrities in the country.

Nyong'o, daughter of Kisumu Governor Anyang' Nyong'o, also laughed off the statement by Balala, who claimed the ministry had looked for her for five years in vain through her managers.

While many may criticise the decision, for tourism stakeholders in Malindi, where the supermodel has been visiting for the last two decades, it was perfect and timely.

Geoffery Waweru, a resident of Malindi who does beauty and hair in Majengo, Malindi, has closely interacted with the supermodel. He said it was right to pick her as the tourism envoy.

Waweru, of Jeff Salon, first met the supermodel in 2017 during her visit to Malindi after being connected to her by a friend to do her eyelashes.

That year their interaction was brief because she was in a hurry, but since she came again in mid-December last year, he has interacted with her more than six times, doing her nails and hair. He described her as an ambassador even before she was appointed.

"She is always busy on the phone, and whenever she receives calls from friends all over the world, she tells them how Malindi is nice, how Kenya is nice, how Africa is nice," he says.

We met Waweru at his salon in Majengo, attending to a foreign client who had come for beauty services, and he was visibly passionate about his job.

He says this time, he has had close contacts with Campbell as they talked and now know each other well.

"I was doing her nails and eyelashes, even toning her wigs. She would give me the wigs to repair and I could do them and on her part, she was happy with my work," he says.

Normally, he would be called through the Lion in the Sun office line whenever she wanted to do her nails, change the colours, clean them or change her lashes.

Geoffery Waweru, a resident of Malindi who does beauty and hair at Majengo in Malindi. He closely interacted with the supermodel several times during her holiday in Malindi
Image: ALPHONCE GARI

She is always busy on phone and whenever she receives calls from friends all over the world, she tells them how Malindi is nice, how Kenya is nice, how Africa is nice

Waweru says Campbell is a very busy person and there has to be an appointment booked prior to his visit to offer the services.

From his experience, he describes Campbell as nice and a person who loves Africa so much.

"Her heart is in Africa. Whenever she is making a call to friends, most of the time she says, 'I love Kenya.' In fact, Campbell assists a children's home in Malindi. She has a home for orphans, so most of the time, she wants to know how the children are faring. She helps a lot," he says.

He says apart from talking good about Africa, she always tells her friends to visit Kenya, and Malindi in particular, as the place is cool and with good security.

"When she was leaving, I could hear her on phone, saying she was headed for Nigeria," he says.

Waweru says the aspect of always inviting friends to visit Malindi, Kenya or Africa in general is itself tourism promotion.

The supermodel's Instagram page has 10 million followers. On January 18, as she left Malindi on board a luxurious jet, she posed for a photo at the entrance and then posted it on her page.

"Naomi Magical Kenya, I'll be back soon. North Africa, let's go," read her post, which was liked by over 143,606 followers and had the hashtag '#NaomiAfrica'.

All through her stay, the supermodel would share photos and videos of the places she visited, including Children of the Rising Sun, the beach, sand dunes, dhow cruising in Watamu and Barefoot beach camp.

While going about her holiday life, she has always spent time in the gym for fitness.

Further, in all her posts, even during her flight to Kenya, she used to post and put the Kenyan flag with an emoji of fire, indicating Kenya is a beautiful place with cool places to visit.

Waweru recalls his best moment with Campbell as being when her mum called. Campbell told her she was being done her eyelashes by a Kenyan, who was doing a good job like other professionals in the world.

His worst moment is when he went late for an appointment and could not make it for dinner with her due to curfew.

He says Campbell has promoted a lot in form of tourism and deserved to be rewarded as she used to play the role for free even before the CS appointed her.

Influencers are always very expensive. But she is doing it pro bono, without being paid

Maureen Awuor, the North Coast chairperson of Kenya Hotelkeepers and Caterers Association, says Campbell was the right choice because she has a huge following and will influence many people to visit Kenya, which will benefit in the form of tourism.

"As you know very well, influencers are always very expensive. But she is doing it pro bono, without being paid," Awuor said.

Awuor, who is the general manager of Ocean beach resort and spa, says Lupita also did not talk much, apart from reacting after the CS said they looked for her in vain for five years.

She says no one knows who is speaking the truth because Lupita did not come out to address whether indeed they tried to reach her or not.

"Maybe nobody approached her in person. They could have tried to look for her through the managers," she says.

The GM says Lupita is Kenyan and if she wants to represent Kenya in the world, she can as well do it, she does not need to be appointed.

"My take is people should relax and anybody who feels they are supposed to be ambassadors of tourism to the world from Kenya, even our local artistes, actresses or actors, they have all the influence, they can as well do that. Nobody will stop them from showing Kenya to the world," Awuor says.

She said the choice of Campbell was the best thing because she is a frequent visitor to the resort town, and with her as the Magical Kenya ambassador, the country stands to benefit.

She said the supermodel has always had visitors coming in through her influence, and that's why she was not forced to become an ambassador.

"We are not paying her any cent, and if somebody decides to do a thing out of his or her own will, I can assure you they are doing it from their heart," she says.

Awuor says soon, the country will see the success of having Campbell as the Magical Kenya ambassador as she is going to do it well.

She says even though Campbell applauded the government for their role in developing infrastructure, the state needs to speed up the expansion of the runway for the Malindi International Airport.

"We all know there are some things that need to be done so that even those international tourists we are targeting are able to come down. You know there is no the way you can go to a place that you can't access,'' she says.

Awuor says the accessibility of Malindi has always been a problem because of the issue of the runway. It's not clear when the expansion will be done, she says.

Late last year, the parliamentary committee on Transport and Infrastructure was told Sh1 billion is required to compensate squatters, who were already identified, to pave way for the expansion of the runway.

The tourism players say they have learned from the pandemic and everyone now is improving their facilities.

She says the government is also giving money and urged the stakeholders to apply for the funds so as to benefit and upgrade their facilities for better tourism.

Others are race car driver Jason Button. Others are the first Prime Minister of Spain Jose Maria and Irish singer and songwriter Bono.