How poor services ruined the holidays for Kenyans

Many complained of slowness, shoddy meals and sub-par rooms

• Expectations were upset as tourists surged while hotels, restaurants had downsized

• As though compensating for the lost months, establishments also exploited visitors 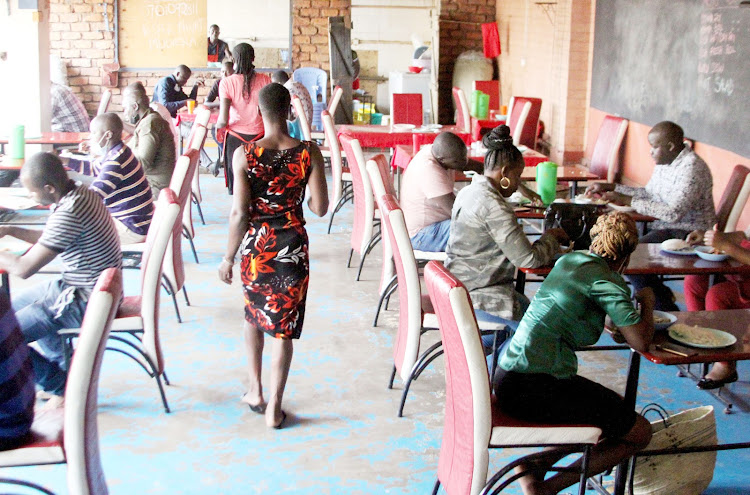 Customers at a hotel after reopening of restaurants under strict Covid-19 measures
Image: DANIEL OGENDO

For most Kenyans, the December festive season is one of the few opportunities they get away from their usual routines, travelling near and far, while enjoying our world-famous tourist sites.

This year was slightly different due to the economic effects of the ongoing pandemic. Many people avoided travelling this time to stay safe from Covid-19. Others had no choice but to stay home because of the financial losses they suffered during the year. It was clear from the start of the festive season that the number of holidaymakers would be lower than it was in previous years.

Many of those who managed to travel on holiday felt their experiences left a lot to be desired. Their tales show there is a big mismatch between customer expectations and the services offered by local hotels and restaurants.

2020 was tough for all types of businesses, but the hospitality industry was especially hard hit. Hotels and restaurants were closed as soon as the first Covid-19 cases were reported in Kenya. Foreign tourists vanished instantly, leaving hospitality establishments idle.

During the festive season, it seems some establishments were not prepared for the surge in visitors they were getting. Others sought to milk the festive season for every coin they could get, as though compensating themselves for the lost months.

Holidaymakers have complained about getting rooms of far lower quality than they selected when booking. Think of going to the Coast during the December heat, then having to sleep in a room with neither air conditioning nor a fan. Imagine checking into what you thought would be a furnished apartment, only to find missing furniture. Or a kitchen lacking in basic utensils.

Here's another scenario: You show up at the gate of a famous restaurant your friends told you about. For some reason, the restaurant owners decide that everybody going through the entrance must pay a flat rate, sometimes as high as Sh2,500 per person, which does not include drinks. The staff at the entrance assure you they have prepared a 'Christmas Special'. You oblige and pay the required fee but the meal takes a very long time in the kitchen. When the meal is finally served, it doesn't look like it's worth the money you paid for it.

“How can one order food and wait for more than two hours, seriously? They claim to be redefining hospitality, yet poor services seem to be the daily routine. The charges don't even coincide with the quality of service," says Dan Kalu, a holidaymaker who was in Eldoret during the festive season.

There have been complaints from people wanting to use hotel swimming pools but having to pay rather high fees for meals they had not planned on taking. Hotel managers say they do this to keep out idlers from the premises and thus ensure the security of guests. And due to the Covid-19 pandemic, some hotels are restricting the number of people getting into the premises, something that may look like discrimination.

In the struggle to survive the lack of business during much of 2020, some hospitality establishments cut the number of staff so much that they were ill-prepared for the surge in demand during the latter part of the year. That may explain "slow service", which happens when the workload is too high for the remaining staff. As holidaymakers can attest, some tourist establishments seemed overwhelmed by the large numbers of guests, even as they took in more bookings.

HOW TO AVOID DISASTER

Ernest Kavingo, a hotelier, says poor service can be blamed on a lack of preparedness, complacency by the management of that particular establishment, and lack of a contingency plan to tackle unforeseeable issues, such as an unexpectedly large number of customers showing up at the same time.

“Service-related complaints may also be due to the guests not being properly informed of what to expect," he says. "The hotel team needs to manage customer expectations. For example, an a-la-carte restaurant makes and serves meals as the orders come in. Different meal items take different times of preparation."

Kavingo, who has managed several hotels across the country during his career, says many hotels employ casual workers during the festive season. Those temporary workers may not know much about their employer's operations, thus resulting in a disappointing experience for some customers. "Due to the seasonality of the hotel business in some destinations such as the Coast, Maasai Mara and Naivasha, hotels operate with few permanent staff team throughout the year. They then hire extra staff/casuals during the peak times," he explains.

With many customers now doing their bookings online, Kavingo recommends that hospitality establishments and potential customers communicate adequately to avoid conflict. “Communication and transparency are absolutely key here,” he says. “The goal of adequate communication is so the management can get to know of any special requirements, size of groups, time to be expected, special requests, and so on.”

The online space also means negative reviews get to be seen by a worldwide audience. Indeed, many people look at online reviews before making their bookings.

Good news is that the vast majority of tourism establishments are open to receiving honest feedback from customers. Feedback is the only way to understand how customers feel about the ambience, food, cleanliness of the facility and the general customer service experience. Feedback, whether positive or negative, should be acted on quickly, Kavingo says.

However, not all the complaints during the festive season are genuine, as a long-time consultant in Kenya’s hospitality sector revealed. “I know from experience that local tourists are not easy to please. Wako na madharau (they are disrespectful). They look down on waiters and hotel staff in general,” says the consultant, who requested anonymity.