BANE OF THEIR EXISTENCE

Politicians turn a blind eye as coastal youth waste away

• One addict comes home at 3am and sleeps until 2pm, neglecting his wife and son 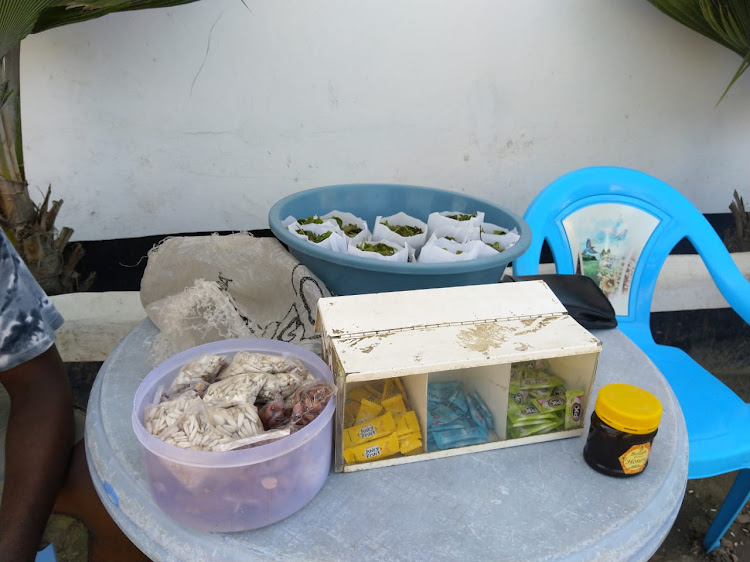 On Saturday, November 7, Mombasa Governor Hassan Joho led police and inspectorate officers in a raid at a popular shisha joint known as ‘Escape’ in Nyali.

During the raid, some 35 people, mostly youth, were nabbed. They had broken the curfew rules and were having a good time.

Out of the 35, more than half were either chewing miraa or muguka.

Among those nabbed was Ali* (not his real name), a friend of Bamburi chicken farmer Juma Hassan, 29.

“Ali has become a muguka addict and cannot go a day without chewing it,” Hassan says.

Hassan says he fears for his friend’s mental state. “Muguka has affected his life so badly but he seems to be oblivious of it,” Hassan says.

Ali, also 29, has a wife and a seven-year-old boy. He is jobless and does odd jobs for a living.

“However, because of his love of muguka, whenever he gets about Sh200, enough for three packets of muguka and some orbit, he leaves everything else and looks for muguka to buy,” Hassan says.

The friend always quarrels with his wife over his role in the family.

“The wife complains to me about the way he abandons his duties as a father and a husband,” Hassan says.

It is Ali’s mother who takes care of the wife and child. Whenever the child gets sick, Ali’s mother goes up and down to provide money for medication. She also struggles to educate her grandson.

Ali stays up late, chewing muguka with friends at their usual maskani (favourite space) up to about 3am before heading home.

“When he gets home, he fails to eat the food his wife prepared for him because he usually has no appetite, goes straight to bed and sleeps until 2pm,” Hassan says.

“Muguka, like bhang, causes psychotic conditions. It is a real threat to the youth who because most have no jobs, thus resort to muguka for leisure because they are cheap,” he says.

A packet of muguka ranges from Sh20-50 in Mombasa and is sold in the open. “It is a real threat,” says the psychiatrist.

Nominated MCA Fatma Kushe, who is the vice chair of the county assembly Health committee, is an anti-muguka crusader.

She says chewing of muguka is so widespread that Mombasa is almost turning into a muguka county.

“One in every four people in Mombasa chews muguka,” Kushe says.

Mombasa Women Empowerment Network runs a programme where they round up mentally ill people roaming the streets of Mombasa, treat them and release them to their families after they recover.

The network’s chair Amina Abdalla says most of those who go through their programme are usually addicted to muguka.

“Out of the 90 people who have gone through the programme, 80 were addicted to muguka,” Abdalla says.

Ali is just one of more than 300,000 people in Mombasa who chew or are addicted to muguka.

Kushe has several times attempted to introduce legislation in the county assembly to moderate the sale and use of muguka and miraa in the county. Her attempts have always faced headwinds.

This is because youth form the bulk of voters in the county and any attempt to take away or interfere with their source of leisure makes other political leaders shy away from tackling the problem head on.

“She usually finds herself isolated with few of her colleagues supporting her,” says one of the MCAs in Mombasa, who sought anonymity.

“Nobody wants to lose popularity because they sided with someone who wants to interfere with the youth.”

Kushe is not daunted, though. “I am only looking after their health and well-being,” she says.

The nominated MCA says muguka is one of the super spreaders of Covid-19.

“Muguka chewers do not keep social distance or wear masks. Thus they are more likely to spread the coronavirus. A significant number of cases in Mombasa are spread by muguka chewers in muguka dens,” Kushe says, praising Joho for the raid on Saturday.

This story first appeared on Sasa Digital, accessible on Sundays at mgazeti.co.ke