Downside of the rise in domestic tourism

Tourists flocking the Mara is destructive to the ecosystem 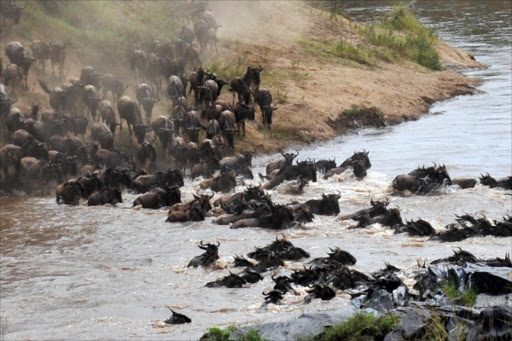 The annual wildebeest migration from Serengeti has given Maasai Mara a life line
Image: Xinhua/Shi Xu

In the last few months, as most of the world’s inhabitants were shut indoors, some species got the breathing space to roam freely. Wild animals in national parks were, for the first time in forever, left to themselves.

The lion’s roars were unheard as they echoed across the plain, the predators hunted at will and the grass grew wildly across the once heavily trodden paths. I am sure the animals themselves must have been confused since they are used to being ogled at by excited camera-carrying visitors. For the last four months, all was quiet in the national parks and reserves, as humans were forced to stay indoors due to the spread of Covid-19.

After a year of living in different countries, my husband and I were reunited when international flights resumed in Kenya earlier this month. I, therefore, decided to take advantage of the opportune visit to show him the best of what Kenya has to offer as well as play my role in reigniting the tourism sector.

Since I had never been to the Masai Mara myself, I decided this would be the best way to start our month-long journey of exploring Kenya. Fortunately or unfortunately (I cannot decide), I was not the only one with this patriotic idea in mind.

In retrospect, most Kenyans want to visit the Mara in August to see the great wildebeest migration but are unable to due to the increased number of foreigners visiting the Mara at this time, making it one of the most expensive tourist destinations in August. However, this year, due to the current losses in the tourism sector, a lot of offers and promotions made it more affordable for Kenyans to visit the Mara.

While Kenyans (and some foreigners) showed up in large numbers to see the great migration, which is a great move in recovering tourism in the country, I could not help but see the downside of all the hullaballoo.

For starters, the increased numbers of exhaust-fuming 4X4s sent most of the wild animals scattering for shelter in the denser parts of the savannah. As a result, full-day safaris resulted in very limited animal viewing. Those left behind seemed so perplexed by the sudden increase of visitors that they changed their patterns.

The wildebeest kept going to the riverbank and back again, unsure of their movement as dozens of vehicles chased them downstream. The vehicles carried excited tourists hoping to see the great migration. They flocked the riverbank on both sides.

In one instance, several tourists disembarked from the vehicles to take pictures of the wildebeest crossing the Mara River. Getting off vehicles is strictly prohibited in the Mara, except for very few designate locations. Alighting from vehicles is not only against the rules but can be very dangerous to the guests as predators are always lurking around wildebeests.

In another instance, I witnessed how 50 vehicles circled a family of cheetahs as they tried to hunt a herd of wildebeest grazing nearby. The tour vans got in the middle of the early morning hunt whenever the coalition tried to put into action their attack plan. After half an hour of being surrounded by roaring vehicles, the coalition laid down under the shade of an acacia tree. Their hunger abated from exasperation.

While my trip was a remarkable experience, I could not help but contemplate if visiting the Mara does more harm than good to the ecosystem.

Massive encroachment has deterred tourist attraction from thronging Maasai Mara in search of food and water
News
3 years ago
Post a comment
WATCH: The latest videos from the Star
by Nabila Hatimy Entertainment Writer
Lifestyle
21 August 2020 - 04:00
Read The E-Paper