NOT A WOMAN'S AFFAIR

When men take the lead in maternal healthcare 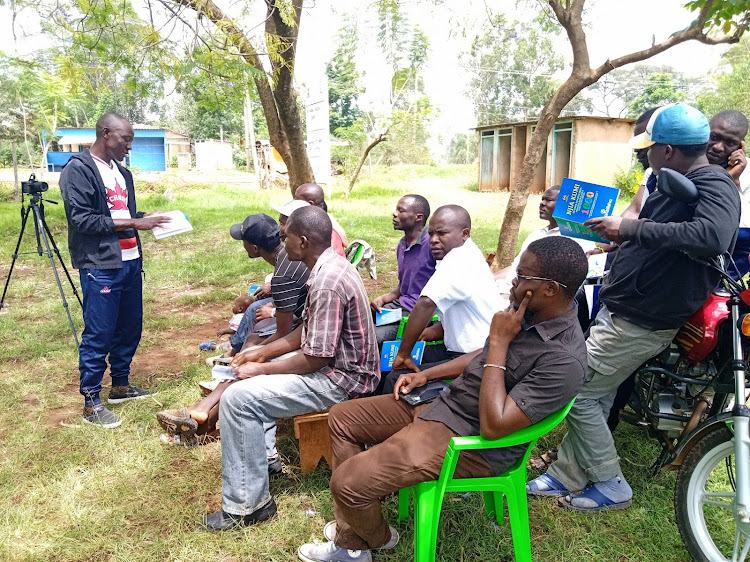 Men will always shy away from pregnancy issues, right? Blame them not; even in the modern era, society has always made pregnancy a woman’s affair.

Some men fear moving close to the labour wards whenever their spouses are booked in for deliveries, and some even decline to touch the newborn until they attain a certain age.

However, the narrative is slowly but steadily changing in Vihiga county, thanks to the ‘Baba Anzilisha’ maternal healthcare programme, which started in 2016.

Baba Anzilisha strategy comes under a programme known as ‘Anzilisha Plus’ spearheaded by Nutrition International, which supports maternal and child healthcare in the county. Anzilisha is Kiswahili for pioneer.

The father-to-father groups mainly consist of young fathers and aspiring fathers, who are given information on good maternal and child healthcare. The groups are empowered to spread information and support mothers in the community.

The strategy was necessitated by the worrying indicators on maternal and child healthcare in 2017: low coverage of skilled delivery, low coverage of 1st and 4th antenatal clinics and low coverage of Iphas intake that contributes to anaemia and low birth weights.

Ambrose Mahuka, the team leader of the Ekwanda Baba Anzilisha men-to-men group, says it all started with an invitation for training by the Nutrition International Organisation.

“It took me time to think through why I was being invited to discuss maternal care issues yet I was a man, but finally I decided to attend the training,” he said.

"We were taught a range of issues relating to the care of a pregnant woman and the subsequent care of the resultant child to grow into a healthy and strong child, after which we were asked to form groups."

He spoke to the Star during a group meeting at Ekwanda health centre.

During group meetings, members discuss how to identify signs of danger before and after delivery, the importance of skilled deliveries in hospitals and breastfeeding the newborn within an hour of delivery, how to apply chlorhexidine on the ambilocal cord after dismembering, and vaccination of the child.

Nowadays, Henry Teka even assists his wife with domestic chores. This is uncharacteristic of Luhya men, who believe that chores like washing, cooking and even babysitting do not involve them

It was not easy selling the idea to men. Mahuka's peers wondered why he was engaging them in matters that are a preserve of women.

He resorted to using football training sessions to bring up the idea to his agemates who were fathers and those aspiring to marry. He finally formed a group of 10 and started meetings.

Today, the group boasts of 30 active members and has reached out to over 200 young couples in Lwanda subcounty.

Though the programme has greatly reduced the frequency of visits to health centres for treatment of diseases, it still faces a number of challenges. These include negative influence by the elderly men in the society, who discourage young fathers from discussing matters maternal as they will be presumed weaklings in the marriages.

Mahuka says only five out of the 30 young fathers who underwent the training on maternal healthcare formed groups, while others vanished.

He says the membership of the group keeps changing because most of the young fathers leave for the city to seek employment.

Timothy Okello, a boda boda operator, said until he joined the group, he never knew that as a husband, he had a responsibility in the care of his expectant wife during pregnancy and in the care of the newborn.

He said he met the team leader of Ekwanda men-to-men group during a football training session, and he shared with him what he had been taught in a training he had attended.

"After reflecting on what he told me, I realised it was worth trying it since my wife was pregnant. I started accompanying my wife to and from clinic, and even today, we visit clinics together when taking our child for vaccination," he said.

He said having been accompanying his wife during pregnancy for clinic visits, he is known in the health centre until he is assisted by the health workers to be served quickly when he appears with the child.

"Since I joined this group, we only visit the hospital for routine jabs and not for treatment of other ailments,” he says.

Okello has become a source of knowledge for other young fathers, who seek advice from him whenever they have maternal problems.

Wilson Chitwa, team leader of Essava men-to-men group in Emuhaya subcounty, who trained together with Mahuka, said he first engaged the idle youths whom no one values in the community, and they accepted the idea.

"I had to first inform them that there were no allowances for attending meetings before moving on," he said.

"Many youths believe they must be paid allowances whenever they attend meetings."

He said most members are those who sought advice while dealing with their pregnant wives. They are the ones who even prepared the programme for meetings.

"I escorted my wife to the maternity when she was in labour," he said. "After some time, she insisted I be called and when I went in, albeit scared of seeing her in pain, she said she only wanted to see me. I then left. And that was the miracle because minutes later, she delivered."

Essava group has a skit that performs plays on maternal healthcare during public holidays as a way of sensitising the public.

Bernard Munala, a member of the group said he has since learnt that deliveries at home are dangerous and is now using any available opportunity to talk to others on the importance of skilled delivery.

"My last child is the healthiest because by the time she was conceived and born when my wife and I were aware of what should be done. I'm regretting why this programme did not come earlier," he said.

Henry Teka, a member of the group said that health of his family has greatly improved since he joined the group.

"Before, we were in hospital every three months for treatment of diseases that I have since discovered can be cured just by the right diet," he said.

"This last child is the healthiest of my children because she was born after I joined the group and learnt a lot, starting from caring for her mother during pregnancy."

Nowadays, he even assists his wife with domestic chores. This is uncharacteristic of Luhya men, who believe that chores like washing, cooking and even babysitting do not involve them.

His wife Judith says her husband, who was hostile before joining the group, has drastically changed.

"I'm urging women whose husbands have not joined this group to encourage them to because it ensures peace and happiness in the family," she said.

We learned that information given to women when they come to facilities is sometimes distorted by the time it reaches the husbands, who are the decision-makers, and decided to start a programme that would involve them

Vihiga county community nutrition co-ordinator Esther Okello says the programme seeks to reduce anaemia among women of reproductive age, reduce stunting of children, mortality and morbidity among children under the age of five.

"We noticed there were gaps in dissemination of information between the facility and the husbands," Okello said.

"We learned that information given to women when they come to facilities is sometimes distorted by the time it reaches the husbands, who are the decision-makers, and decided to start a programme that would involve them.

"The young and aspiring fathers have spread the information to others and there is change. We can now see men bringing their spouses to clinics, something that was rare two years ago."

Following the introduction of the programme, the first and second antenatal clinic visitations now stand at 99.5 per cent and 76.9 per cent respectively. Facility deliveries stand at 94 per cent, while postnatal care coverage is at 79 per cent.

The programme has also pushed up the knowledge on the benefits of Vitamin ‘A’, while vitamin ‘A’ coverage is at 71.9 per cent.

She says most expectant women used to attend clinics in the last trimester of their pregnancies just to get the clinic card and disappear, not even to return to deliver in the facilities, but this has now changed.

The programme has trained over 500 health workers, community and church leaders as well as heads of health facilities. It looks set to make a change in the lives of many mothers and children in the county, usually vulnerable groups.