Teen rises above FGM, early marriage to top in class

Her story illustrates the heartbreaking reality that is all so common to young Pokot girls, who go through a cycle of child labour, FGM and early marriage

• Although Chelimo bears both emotional and physical scars, she has managed to triumph in the face of adversity 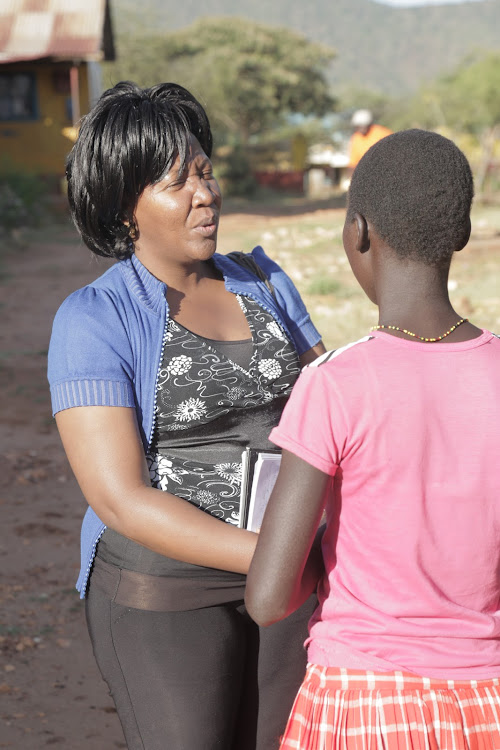 Vivian Chelimo, 13, beams with pride as she runs her index finger over the school’s merit list. Chelimo has maintained top position in her class at Morpus Mixed Primary School, which shelters girls rescued from FGM and early marriages in West Pokot county.

She has just joined class eight this year and cannot wait to proceed with her secondary education and realise her career dream to become a lawyer.

Chelimo is the firstborn in a family of eight children and the only one in school. There is nothing about her that hints at the traumatic childhood she has endured.

She is a picture of happiness, success and contentment, her firm handshake exuding confidence. Hers is an extraordinary, inspiring story of resilience and courage in the face of abject poverty, female genital mutilation, early marriage and domestic violence.

Chelimo recollected the desperate experiences as a child that set her on a challenging journey, which would culminate in her readmission at Morpus Primary School in 2017.

“At the age of nine years, I was forced to drop out of school to mine coal in Uganda to supplement my family’s income,” she said.

“My father had just abandoned us and the meagre income my mother generated from selling illicit liquor was not enough to fend for the family. These were the most trying moments of my life and I had to work tirelessly in the mines and send all the proceeds home.”

A group of young men from West Pokot would later come for her to ostensibly join a two-day ceremony in the village. “I did not know I was being led to a trap. I was circumcised at the age of 11 years and married off to a 60-year-old man, who presented 30 cows as dowry to my family.”

At her new home, she had to shoulder the responsibility of a wife and persevered in the abusive relationship until she escaped and sought refuge at Morpus Primary School Rescue Centre.

But it was not easy. “I spent nights in the cold, braved the scorching sun and prayed that I had not conceived during my six months in marriage. I walked for more than 100km to get to the rescue centre.”

Her story illustrates the heartbreaking reality that is all so common to young Pokot girls, who end up doing manual work before undergoing the harmful rite of passage, after which they are married off.

"Most of the teenage girls below 15 years get married off after a suitor presents livestock as dowry. This often includes 50 goats, 30 cows and 10 camels,” Chelimo says.

Although Chelimo bears both emotional and physical scars, she has managed to triumph in the face of adversity.

In June 2018, she was among children who participated in the Children’s Assembly in West Pokot. “We presented an MOU to the governor, which listed issues of concern to us. Key among them was protection against FGM and child marriages.”

The Morpus Primary School has given her a new lease of life. “This is the place I call home because I cannot go home. My family never wants to see me because they lost the 30 cows paid as dowry after I escaped from my matrimonial home,” she says.

At Morpus, she has received a lot of psychosocial support and been freed from the restrictive shackles of early marriage. She has the freedom to reach beyond the sky in pursuit of her career goals.

The school, with support from UNFPA, runs a programme to train young girls to become agents of change and break the cycle of destructive cultural practices.

“We have been empowering these young girls with education. We believe this automatically increases their probability to transcend the conditions of poverty they currently exist in,” adds James Lokuk, who is the head teacher of Morpus Primary School.

About 400 girls from the vast county have been rescued from early marriages and FGM since 2003.

“Our mission as a school is to help girls from the most vulnerable communities to realise their potential — and possibly allow them to step off the road to early motherhood and onto a career path instead,” Lokuk says.

“These young girls have begun to envision a world where they work as professionals, and where they build solutions to problems faced by their peers. This broadening of their minds and what they believe they are capable of is perhaps the most powerful effect.”

George Ndung’u from World Vision says a series of interventions have helped to bring down the prevalence rate among young girls.

He singles out the ‘channel of hope’ as one of the strategies that have helped to yield returns to the anti-FGM campaign. “It is a strategy that brings together pastors and their wives to discuss issues of FGM and child marriages and to protect the girl. The people who come to church are the same ones circumcising the girls,” Ndung’u says.

“If the pastor stands on the pulpit and says it is wrong, the likelihood of that congregant adhering to what the pastor has said is high. Some of the pastors are providing refuge for girls in danger.”

He also cites ‘celebrating families’ as another strategy working in the area. “This is where we bring families together just to show and discuss the value of the girl in a family and look at the barriers that stop them from accessing education,” he says.

“One of the things we realised is that girls go through FGM because they do not have people they can look up to in the community. The only one they can identify with is their mother, who has undergone the cut, got married at 14 and now has children.”

Ndung’u says the situation is dire because some of the girls who have undergone the Alternative Rite of Passage lapse along the way and end up going through the cut. “This is because of peer influence and not having established structures for mentorship and follow-ups and the influence of the mother, father and in-laws,” she says.

County commissioner Apollo Okello blames FGM for stunting academic growth. He says the county continues to wrestle with high illiteracy levels, which currently stand at 60 per cent, with a number of school-age children being out of school.

The United Nations Population Fund estimates that 130 million youth across the world are out of school, 70 per cent of whom are girls.

Further, 133 million girls and women have experienced female genital mutilation in 29 countries in Africa and Middle East, where the harmful practice is most common.

In the developing countries, about 82 million girls will become mothers before reaching 18 years, whereas girls under the age of 15 are more likely to die during childbirth than their more mature counterparts.

During the recently concluded Nairobi Summit on ICPD25, President Uhuru Kenyatta pledged to end FGM by 2022. As the country races against time to beat the deadline, stringent measures must be put in place to ensure young girls access basic needs, such as education and healthcare.