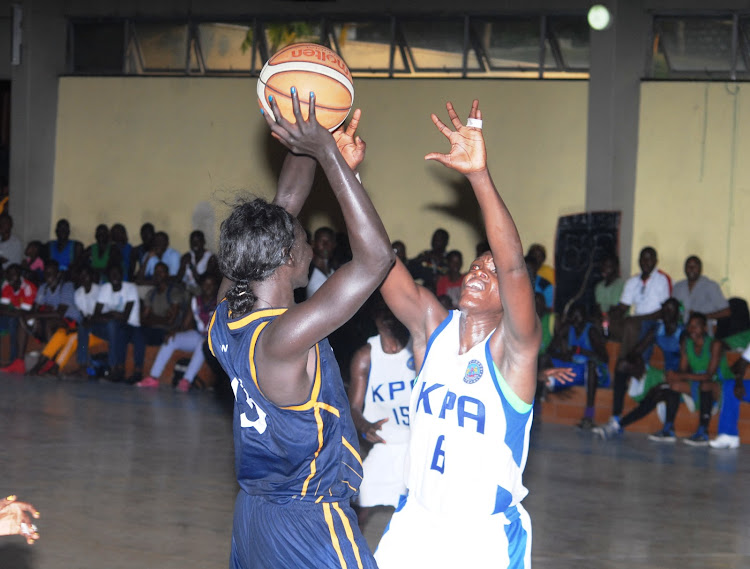 Sarah Chan of USIU (in white) in action during a past basketball playoff
Image: FILE

When Sarah Chan arrived in the country as a young girl from South Sudan in 1998, she had no idea what lay in store for her.

But years later, the lanky star defied all the odds to become not only a super basketball player of unequalled status in the country but also made herself a name throughout the continent.

It was during the 2015 FIBA African Champions Cup for Women in Luanda, Angola, and Chan was playing for USIU. They finished 10th in the 12-team competition, but Chan’s exploits were noticed all over.

The 1.92m centre put in a dominating performance that made her the darling of the crowd and earned her respect from her opponents. She led all players in scoring and rebounding, with averages of 26 points and 12 boards in seven games.

She reached a milestone as she was also named to the All-Tournament team along with MVP Leia Dongue, Maimouna Diarra, Italee Lucas and Ana Suzana Jaime. It was a huge personal recognition.

Chan took her baby steps towards being a star after she joined Laiser Hill Academy. Her father came to Kenya after he got a scholarship to study theology in Nairobi. He, therefore, brought with him his family, and they started their new life at Karen.

“It was at Laiser Hill that a teacher who was impressed with my height urged me to be active in sports. I took up basketball and spent most of my time playing with the boys,” she says.

It was coach Tom Opar who worked with her and later asked her to join the Kenya Railways team. Here, she played in both the ladies' and the men’s teams. “It is here that I got better and stronger,” she says.

Opar, now based in Germany, recounted the player's journey. “Sarah joined Laiser Hill in 2003. That time the school had no girls' team, and she had no idea how the game was played,” he said.

“What made my work easier was her interest and dedication. She worked out with the boys to develop her skills. It is amazing to see how basketball can transform somebody’s life, and Sarah is a living example.”

From there, she moved to USIU in 2007, then headed to Union University in the US in the same year. There she found Josephine Owino, the first Kenyan to join the WNBA.

After college, Chan then moved to Europe, where she played in Spain and Portugal before returning to the country. She has also played for some top continental clubs in Tunisia, Angola and Mozambique.

Upon her return, she rejoined USIU, where things took a dramatic rise, with the college team winning the national league and also participating in two back-to-back Fiba Africa Women's Club Championships in 2015 and 2017.

But the 2015 one is the one that will remain etched in her memories forever. Despite the Flames finishing near bottom in their first continental showing, Chan was named among the tournament’s best performers.

“I was the top scorer, top rebounder and was even made the list of Africa’s top five best players. I scored 43 points in a 63-60 loss. “Despite all that feat, it was not the best tournament for me, though,” she says.

After that, injuries made it difficult for her to play, forcing her to take a break from the game. “I got injured and was not healthy to be able to produce. I did not see the need to commit if I could not do it better,” she said.

The much-travelled Chan feels Kenya has done so much to nurture the many South Sudanese talents scattered all over, especially in the city.

“Our community here are happy to count on Kenyans in our lives, and our basketball contribution shows we have returned that respect,” she said.

“Honestly, I wouldn’t be anywhere if not for Kenya, which has nurtured my talents and made me who I am. It has shown how communities can actually improve the success of the refugees.”

Veteran national women’s basketball head coach Ronny Owino describes Chan as “a brain player not a brawl player, very refined in the way she plays. She dominates the paint in terms of rebounds”.

Sarah's achievements are immeasurable, and Owino believes with her in the Kenya team, there is little doubt conquering Africa would have been possible.

“She is a tremendous player and Kenya would easily have won a continental honour with her in the side,” he said.

Sarah, though, did help the Nairobi team dominate the inter-cities tournament.

The Chans' love for basketball is huge. Sarah has a younger sister, Deborah, and older brother, Arou, who both played for the university team and in their own ways also made their names.

Chan is one of the many more South Sudanese players scattered all over schools, colleges and clubs in this republic. Through their own efforts, a good number of them have even moved on to US.