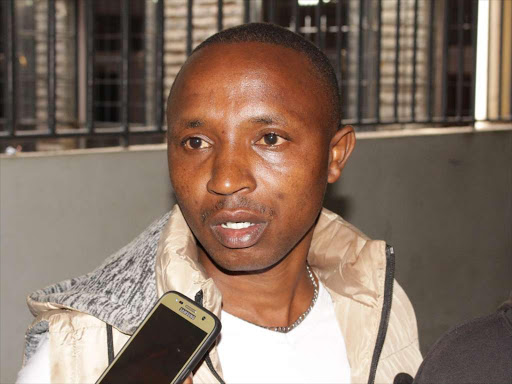 Administration Police officer,Inspector Tamooh Sanait when he came willing to bail out Boniface Murage Wangechi after a Milimani Law Court on Tuesday,February 19 acquitted him of a charge that on February 16, 2019 at KNH he attempted to escape with his baby girl in an attempt to defraud the hospital a sum of Shs .56, 937 incurred by the baby who was admitted at the hospital.He was intercepted by the hospital security guards while leaving the facility carrying something in a blue carrier bag who then forcefully opened the bag and discovered that he was carrying a baby. PHOTO/COLLINS KWEYU

When the news of a 22-year-old father charged with smuggling his own baby out of Kenyatta National Hospital broke, a cop was touched and decided to foot the bill.

AP officer Tamooh Sanaet who was at the forefront during the Dusit terror attack said even though what young father Boniface Murage Wangechi did was wrong it was a touching act done by a loving father hence his decision to help out.

“It is not that I’m supporting what he did because it was wrong but looking at it from humanitarian angle, you will clearly see that life had pushed him to the wall and that is why he did what he did. I decided to sacrifice my few months’ pay in aid of the baby,” Sanaet said.

He added, ”I am a police officer but everyone has a different personality and this detention of a minor at hospital and arraignment of her father over her hospital bill touched me.”

Bonface Murage’s only offence was being poor and for that he pleaded guilty which earned him three months suspended sentence.

He was accused of defrauding the hospital of Sh56,937 by attempting to smuggle the minor detained over the bill which he could not pay.

Inspector Sanaet who is in-charge of the Kitisuru AP camp was among Kenyans who came out in aid of Wangechi and gave him Sh57,000 after he left court cells.

Sanaet joined the AP in 2011 after graduating with a Bachelors of Education in Kiswahili and CRE the previous year.

He went for the basic police training at the National Police Service, Embakasi ‘A’ campus before he was posted to North Eastern for two years.

The father of a two-year-old son later returned for the six months inspectorate course at the same college in 2015 after which he was posted to Westlands subcounty in charge of the Kangemi camp.

Sanaet arrived at the country’s leading referral hospital with Sh57,000 to pay the bill only to find another well-wisher had paid.

“Since I had decided to give away the cash to this family, I didn’t want to return with it. I asked for his contacts but was informed he had no phone so I followed him to court.”Wangechi left the court cells overjoyed after learning that his wife and baby had been bailed out of hospital.

Tears of joy flowed freely down his cheek as he lacked the words to express himself. Half the time he looked confused not believing that after one night in cells he had finally acquired freedom.

Another well wisher who didn’t want to be named hired a lawyer for him which helped the young father before sentencing. Journalists were all over him seeking an interview but the soft spoken man could only utter a few words.

Politician Hashim Kamau said he paid the bill and did shopping for Wangechi’s wife before escorting them home on Monday.

“I am happy with the ruling of the court and the support that I have received from Governor Mike Sonko. I have been doing inconsistent casual jobs to eke out a living and am happy that Sonko has promised me a job,” Wangechi told journalists outside Milimani courts.

He said his child developed a fever and was taken ill at KNH.

But after recovering, he had no money to pay the bill and the infant and the mother were held at the hospital as lodgers.

He decided to put the infant in a bag he used to bring his wife food at the hospital to remove her from the facility without knowledge of the mother.

“The baby was safe and secure because she was fast asleep and I wrapped her properly and even left a breathing space for her but security guards at the exit asked to see what was inside,” he said.

That is when Murage was arrested on Saturday for smuggling the baby out of the hospital to evade the bill.