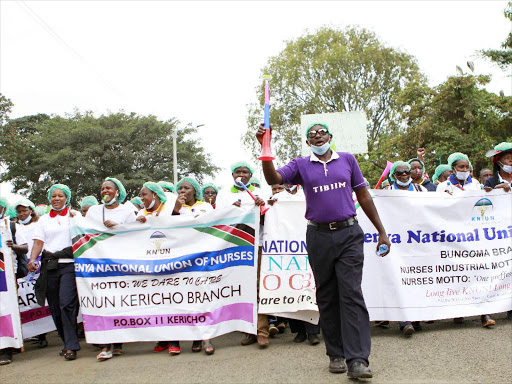 Nurses March during a countrywide strike in 2017/FILE

Governors fear copy cat effects if they implement the collective bargaining agreement with nurses as doing so might trigger similar demands by other county workers.

The Star has established that a technical team put together by the Council of Governors, has advised against awarding nurses pay rise.

The nurses, who have vowed to go on strike on February 4, are demanding enhanced salaries and allowances as provided for in the CBA with county and the national governments.

This comes as clinical officers, the backbone of health services at grassroot facilities, issued a 14-day strike notice pushing for better working conditions and salaries.

The clinical officers have served the council of governors, the national government and the ministry of labour with the strike notice ahead of the Nurses’ strike set for February 4.

According to an internal report prepared by the technical working group on human resource at the CoG, should governors sign the higher pay agreement then that would cause incessant salary demands by employees from other professions.

“It is important to relook at the issues being advanced in view of the prevailing economic conditions and the inherent risks of triggering a ripple effect,” notes the draft report seen by the Star.

According to the report which has tabulated the pay disparities among various professions at the counties, nurses’ gross monthly income is nearly double that of engineers, architects and surveyors joining public services from universities.

An engineer with a diploma or architect who joins the service at group H earns a basic salary Sh24,380, a house allowance of Sh3,400 and a commuter allowance of Sh4,000, bringing the gross monthly pay to Sh31,000.

Nearly thrice the salary of an engineer, architect and surveyor with degrees.

Council of Governors chairman for Labour and Human Resources, James Ongwae, yesterday told the Star that the Nurses and clinical officers’ demands would cripple counties.

“While we empathize with the health workers, their demands would have a huge ripple effect in the counties. Currently counties are barely surviving,” the Kisii governor said.

The governors are as well in dilemma over possible shutdown of public health facilities after clinical officers joined nurses in issuing a strike notice if their CBA is not implemented.

Some 23 counties have not struck a deal with the Kenya National Union of Nurses while the rest have working terms with the respective nurses.

The clinical officers, considered critical in the delivery of health services in the absence of doctors, on Wednesday issued a 14 day strike notice to the council of governors and the ministries of health and labour.

“We therefore demand that the Ministry of Health and counties jointly as a group of employers resume CBA negotiations centrally as a group of employers within the next 14 days failure of which the union will undertake industrial action as provided for by the law,” reads the strike notice. The notice is signed by national chairman Peterson Wachira and general secretary George Gibore. The union is pushing for uniform working conditions and terms of services across all the 47 counties.