Dodgy Doctor Series: Two accused of raping patients yet to be convicted 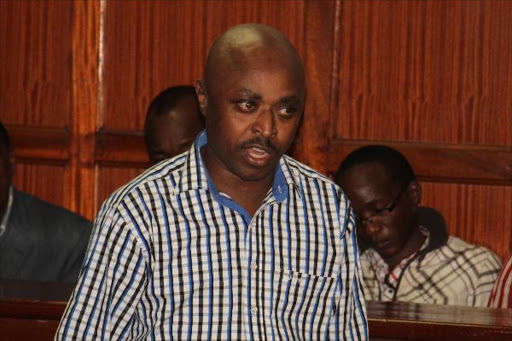 Mugo wa Wairimu at Milimani law courts where he was charged afresh with rape, operating a clinic without valid licences and masquerading as a gynaecologist, March 14,. 2016. Photo/PHILIP KAMAKYA

In October 2015, James Mugo alias Mugo wa Wairimu was charged with 12 counts of crimes as it was alleged that he sedated and raped his patients.

Mugo was masquerading as a gynaecologist where he allegedly raped a woman at his Prestige Health Care clinic in Githurai 44 on November 1, 2014.

He was released, before being brought up on additional charges for operating an illegal clinic in Nairobi.

On March 2017, ‘Dr’ Lawrence Wachira was accused of raping one of his patients at his Rapha Medical Clinic in Kiamwangi in July 2016.

He is neither registered with the Kenya Medical Practitioners and Dentists Board nor is his clinic in the health facilities register.

He was released on bond and a hearing scheduled for May 15.

If you want to find out if your doctor is registered, check

Post a comment
WATCH: The latest videos from the Star
by Dr Diana Wangari, @diana1wangari
Lifestyle
24 March 2017 - 09:00
Read The E-Paper