My night out with the Freemasons 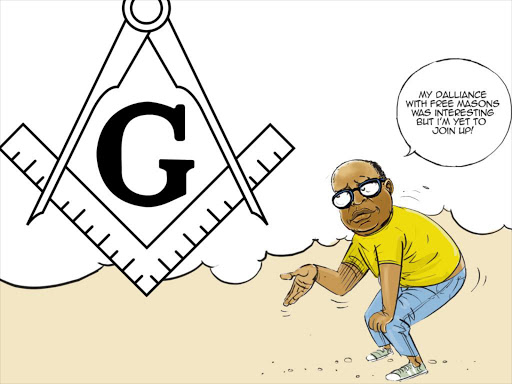 My night out with the Freemasons

don’t care to belong to any club that will have me as a member” is a quote that some people live by, others wish they could and some think they do.

On the whole, I belong to the category of those who think they do, but when I look back on my life, I find i have at many points joined or even helped form social groups and even encouraged others to join.

Back in standard six, I was a member of a society (we were too nerdy to be a gang) of five who spent morning and lunch breaks together in deep discussions about setting the world to rights and other such highfalutin issues. We even had a complicated handshake that had been inspired by the TV series Good Times.

Our one masterplan was that when we were all 60 years old, wherever we were in the world, we would get in touch, buy ourselves a boat and go in search of the Bermuda Triangle, which we knew to be this section of the Atlantic Ocean where aircraft and ships disappeared mysteriously.

The main thing about our group was that we considered it a secret society, clearly encouraged by books we read by authors such as Enid Blyton, Franklin W Dixon and Robert Arthur Jr. It was a boy thing and didn’t last that long, as at that age, friendships and groupings are fluid.

That said, we were very strict about our group’s membership and often turned down suggestions that we let others join our select group.

In the adult realm, of course, there are Secret Societies and Societies with Secrets. Years ago, I met an out and proud Freemason, who insisted that his organisation was the latter sort and that religious cults, for instance, were members of the former.

I must admit that aged all of about 12 years, the nuance was somewhat lost on me, but with maturity and life experience, I may have come to grips with this fine distinction.

According to some literature I came across, Masonic rules demand that members support each other and keep each others’ lawful secrets. It is this, along with talk of career and financial boosts, that are supposedly benefits of membership, which makes suspicious non-members believe masonry is all about corruption.

I was prompted to think of all this recently when we attended a fundraising event for a charity set up and organised by the Provincial Grand Lodge (basically the local governing body) of Freemasons.

Because I still half-expected rolled-up trouser legs and funny handshakes on display, I must say I was slightly disappointed. Nevertheless, I was delighted with my table gift of a piece of chocolate decorated with the insignia of the masons, who today say they are all about male bonding and charitable work.

Would I ever join? I don’t know; nobody has invited me yet.

Post a comment
WATCH: The latest videos from the Star
by MWANGI G @MwangiGithahu
Lifestyle
27 August 2016 - 00:00
Read The E-Paper