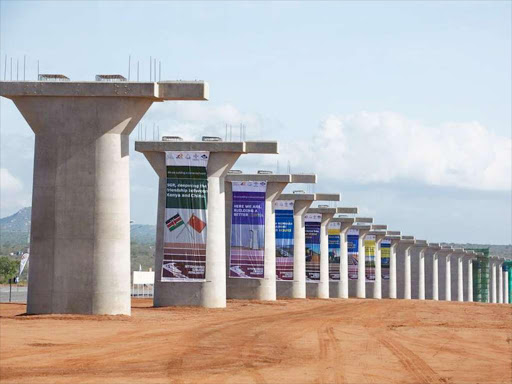 The harvesting of sand in the Indian Ocean for construction of the Standard Gauge Railway has been banned.

stopped China Roads and Bridge Corporation from harvesting sea sand in Kwale County after locals appealed against a licence issued last year to the company by National Environmental Management Authority.

The tribunal initially stopped the CRBC from harvesting the sand in July last year pending the determination of the appeal.

The sand was to be used as a filling material in reclaiming the 13 acres from the Indian Ocean, creating the ground on which the container terminal to link the standard gauge railway to Mombasa port will be built.

The tribunal has now advised the company to look for the sand elsewhere and not inside Indian Ocean, or carry out a fresh environment impact assessment.

“Moreover, should it turn out that there is not enough sand in the site to meet that demand, that could jeopardise the project,” the tribunal ruled.

The tribunal canceled the Environmental Impact Assessment licence number Nema/EIA/PRS/1581 issued by Nema to China Roads on May 22, 2015, and directed that a full EIA study be expeditiously conducted in full compliance with the law, involving relevant lead agencies, also taking into consideration finding of the tribunal.

The appeal was filed by the South Coast Residents Association and Kwale County natural resource network last year. They said the EIA licence issued by Nema to China Roads and Corporation was illegal.

Basila said the ruling was fair for the interests of Kwale people who entirely depend on the sea for livelihood.

“We have reports they are not appealing and that China Roads will be looking for alternative because a year has gone without success. Even if they appeal we will meet in court and engage for more than three years which will be more delaying their work,” she said.

The move is likely delay the reclaiming of the Indian Ocean for a new rail container terminal.

The company intended to harvest 800,000 cubic metres of sand by digging about 19-50 metres deep offshore in the ocean on a strip of 0.4 -1.0 kilometres from Likoni through Waa to Tiwi areas in the south coast, Kwale County.

The company said dredging would have been done between 400 metres to three kilometres from the coastal shoreline, which is too close to the fragile reef and within beach areas, against international standard for sea and sand harvesting which is between five to 10 kilometres from the shorelines.

“Project report by china roads and Bridges Corporation ignored the value of the marine ecosystem. The project report did not provide for an underwater survey or scuba survey, sampling on the study bottom or towed/remote video and failed to give quantitative assessment of the potential impacts on habitats and species,” said Midika and Company Advocates, who acted on behalf of residents.

South coast residents also claimed the project failed to describe sizes of sand, type and how close the deposits were to the reefs, provide data on the chemicals to be used or specify measures to mitigate loses of the beaches.

They also claimed the project report failed to address the possibility of greenhouse gas emissions and failed to explicitly state how restoration of the sensitive massive ecosystem will be undertaken.

Nema responded to the appeal through advocate Judith Kithinji saying locals complained after EIA licence had been issued and that some of their concerns had been addressed through the EIA licence condition.

CRBC said they wanted sand inland but environmental analysis concluded showed that that it was full of impurities.

“The EIA project report addressed a number of issues raised by locals including turbidity and that may be raised by sea sand harvesting activity and sand suction,” said their lawyer Albert Muma.

Locals also claimed the EIA report failed to provide clear redress for among other things loss of fishing ground and address the potential of greenhouse gas emissions.

“The tribunal found that the project according to explanation by China roads and Bridges Corporation is of high magnitude which raises the likelihood of significant impacts. Nema ought to have required a full EIA study report considering the magnitude of the project,” reads the tribunal ruling.

Prof Jacob Kibwage, a South Eastern University College lecturer who conducted the EIA, admitted that fishermen would be affected negatively since most of them were practising deep sea fishing in the proposed sand harvesting area.

Locals add that Diani and Tiwi beaches, several times voted the best beaches in the world, would be “totally” destroyed if the project goes on.

The tribunal agreed and noted that the investor did not put in place mitigation measures, two months after being issued with the Nema licence.

“There was no social-economic study to properly identify potentially affected fishermen, how they could be affected and the level of compensation that they would receive. China roads committed to implement a number of mitigation measures which it had not even planned yet it was statedly prepared to commence sand harvesting,” says the appeal ruling.

The tribunal also said the investor did not satisfactorily explain where unwanted materials scooped with sand would be dumped.

The tribunal ruled that China roads could have found alternative areas to get sand for SGR project like the mouth of river Sabaki in Malindi.

Post a comment
WATCH: The latest videos from the Star
by By ALLOYS MUSYOKA
Lifestyle
19 February 2016 - 05:00
Read The E-Paper