Anger in the north as mysterious disease wipe out camels 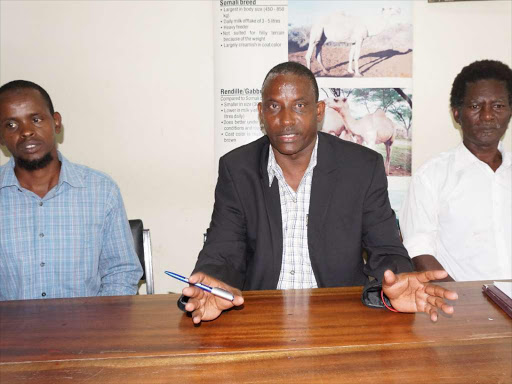 Patrick Katelo, the chairman of the Kenya Camel Association,

Camel farmers are raising the red flag about a disease that has killed 500 animals in the last three weeks in 14 counties in northern Kenya.

The farmers say the disease has indiscriminately killed camels of all ages after short course characterised by off feed, fever, bloat and nervous signs in some cases. They are asking the government to intervene and explain the cause of the disease.

“We are scared of what of what is happening. Our animals are dying and we don't know what is killing them. The disease is strange and we even don't know its name,” Patrick Katelo, the chairman of the Kenya Camel Association, told the Star.

Katelo says the mysterious disease cropped up in 2006. Its carnage has increased in the last few weeks, starting December 2015 when it became chronic. The disease kills between seven to eight camels on a day and the KCA is calling on the government to conduct serious research to determine its cause.

“This disease is unique and different. Our animals are dying within one hour of contracting it but nothing is being done to establish its cause. We have been left on our own with no or little government support,” Katelo.

Balambala MP Abdikadir Aden confirmed the existence of what he describes “as this strange disease”.

“I can confirm to you that Dujis and Shidle areas in Garissa are the most affected areas. Just this morning, a farmer notified me that two of his camels died while walking! They were not sick, they just collapsed and died mysteriously,” he said.

“I have already notified the department of livestock in the region to come to the rescue of the pastoralists because they are losing large numbers of livestock in a manner that cannot be explained.”

Early last month, the Garissa county government set up two teams consisting of veterinarians and lab technicians and dispatched them to investigate the reported cases. One team covered Balambala Sub County and the other team covered parts of Dadaab and Lagdera.

They were urged to investigate the reports of the mass camel deaths by taking history from the farmers, clinical examination of sick cases and sampling, post mortem examination and sampling. The teams would also provide educate farmers how best to manage the disease.

Samples collected include serum samples, blood smears and tissue samples – lungs, liver and heart – which were submitted to the regional veterinary lab in Garissa. But the lab has limited capacity. Tissue and serum samples were also sent to the University of Nairobi and Kemri.

The teams' findings cited the recent heavy rains and lush new pasture, increased tick population and heavy presence of ticks on the camels as possible causes of the mysterious disease. Others were the presence of biting flies and increased mosquito populations, misuse of drugs/vaccines, recycling of used needles without sterilisation and free mixing at watering points and markets.

There was also no timely isolation of sick animals from the healthy ones.

However, the teams did not identify the disease.

They proposed that brain tissue samples or tissues of intima of big blood vessels should also be collected to check for Cowdria ruminatum bacterium to rule out the killer camel heartwater disease. The teams did not consider this disease in their earlier sampling.

They proposed several mitigation measures which have failed to address the problem. They asked the farmers to use good antibiotics at the right dose and avoid misuse of the drug. They were also advised to sterilise needles before reuse.

However, the report of the team notes that farmers were resistant to use conventional acaricides citing the adverse reaction of causing respiratory problem in camels. They opted to use traditional herbs to reduce the tick burden.

Katelo says veterinarians must come to the rescue of the pastrolists by conducting an in depth research.

“We want a conclusive answer of this problem. There is total lack of interest from both levels of governments and unless the situation could affect the security in the regions," he says.

He adds that Marsabit county has lost 257 camels, Mandera 120 and Wajir 130 since December. The association says it is yet to receive conclusive reports from other counties in northern Kenya.

He warns the number of animals that have died could be higher because information on the situation is limited due to the terrain and harsh environmental conditions in the areas concerned.

Post a comment
WATCH: The latest videos from the Star
by IBRAHIM ORUKO
Lifestyle
05 February 2016 - 06:00
Read The E-Paper