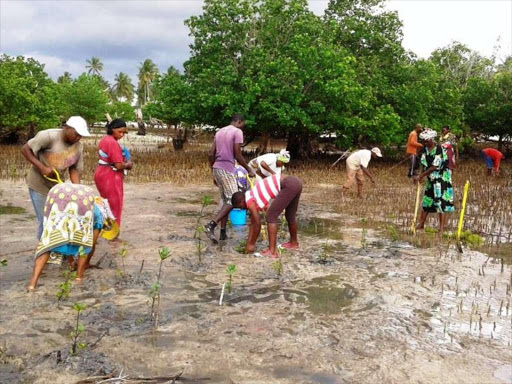 Mikoko Pamoja community based organization members at Gazi and Makongeni in Msambweni Kwale planting mangrove plants at the shores of Indian ocean as they conserve the plant to trap carbon dioxide for climate change mitigation.They earn Sh1 million annually for the last two years for planting and conserving mangrove. Photo by ALLOYS MUSYOKA

Four years ago, it was difficult to convince Gazi and Makongeni communities in Kwale that conserving mangroves could earn them money. But last year they earned Sh1 million, just like that.

Through the Mikoko Pamoja community project, locals plant and take care of mangrove trees at the shores of the Indian Ocean.

Salim Mwarima, the project coordinator, says it took long to convince locals and agree to plant the trees.

Mangroves are trees and shrubs that have adapted to life in a saltwater environment. There are about 80 different species and all of them grow in areas with low-oxygen soil, where slow-moving waters allow fine sediments to accumulate.

They consume carbon dioxide emitted in the air five times more than any other terrestrial trees, playing a major role in cleaning the polluted air of gases emitted gases by industries and automotive.

Mwarima said it was not easy since the community didn’t understand the science around mitigating climate change by simply planting trees at the shores of the ocean.

“We registered it as community based organisation two years ago after preparation and planting mangroves as we convinced community around that the project was very important,” he said.

They have planted the trees on 117 acres of land and now they are selling carbon dioxide to international organisations through the reducing emissions from deforestation and forest degradation (REDD), a United Nations-led mechanism that enables governments, companies or forest owners in developing countries to be rewarded for keeping their forests instead of cutting them down.

He said the funds last year were used to fund education in the area by buying books for schools and financing a piped water project for two villages this year.

“Thirty two per cent of the funds goes directly to community development projects of their choices, for example, we support education, we have water in two village courtesy of the funds already,” he said.

Mwarima said the project will see them receive incentives for the next 20 years.

The project was showcased in Paris, France, in the deliberations on how to combat climate change last month.

Some groups of indigenous people organisations had argued in Paris that Redd would render indigenous peoples “extinct”. However, the final deal explicitly recognises Redd as a key scheme through which climate funds will be channeled

Baraka Women and Youth Conservation Group Project Coordinator Juma Mohammed said their group was started in 2014, comprising more men but the number of men dwindled and the group turned to be a women and youth membership.

“We came in to offer technical support. We train them how to do professional conservation,” said Judith Okello, a researcher with Kemfri. She said the main aim of the project is to fight climate change.

“When we continue planting these trees, which consume a lot of carbon dioxide from the air, we curb the harsh global warming” she said.

Post a comment
WATCH: The latest videos from the Star
by By ALLOYS MUSYOKA
Lifestyle
08 January 2016 - 06:00
Read The E-Paper