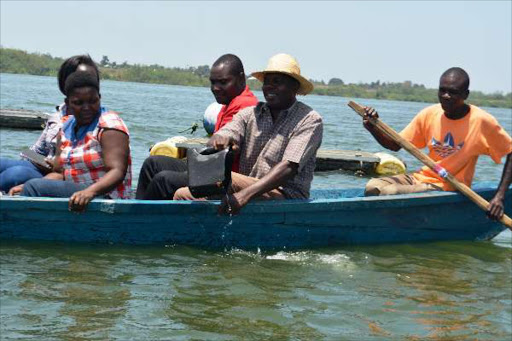 Fish caging is a method where fingerlings are stocked and caged within the lake away from predators until the maturity stage.

Winnie Owuor, a resident of Usenge sub-location, Yimbo West ward, says she opted for fish caging because it is not labour intensive and requires little space.

“I was introduced to fish caging by a Scottish friend in 2009. It took sometime, a lot of experimenting in collaboration with a local non-governmental organisation and Siaya fisheries department, to actualise the project in 2013,” Owuor says.

She started with only four fish cages in 2013 but now owns 30 cages with each carrying 2,000 fingerlings. She plans to increase the number to 60.

“After seven months, the fish was ready for harvest and I was able to make Sh1.4 million from the four cages. I also make and supply cages to other farmers within Lake Victoria region at a cost of Sh60, 000 each,” says the 65-year-old retired IT expert.

The good harvest encouraged her to make more cages and stock more tilapia fingerlings to enable her supply to customers from Nairobi, Kisumu, Busia, Siaya and Nakuru counties.

She has employed more than 20 people who are charged with harvesting and feeding the fingerlings. It costs about Sh20 to feed a fingerling to maturity stage.

The cages have a wire mesh lid on top with a net inside to protect predators from attacking the fish. The design makes harvesting easy because they are accessible and properly fixed.

The square cage measuring two by two metres is made in such a way that the fish are confined and fed at a central point in the lake. The floating cage made of metals, wire mesh, nets and 20 litres jerrycans can hold 2,000 fingerlings. The jerrycans enable the cage to float. It also has two 100kg concrete anchor made of waterproof cement for holding the cage in a central point in the water.

Owuor has since trained more than 100 farmers who have embraced the technology at the lake shores next to their homes.

According to Bondo MP Gideon Ochanda, caging is one of the best fishing methods as it helps reduce over-fishing in the lake from illegal fishing gears.

Ochanda says the method is more profitable since the fish are in their natural water habitat, which does not require inand out flow of water like other fish ponds.

“One farmer can have many cages within a radius of 300 metres and this is an attractive option for people with limited space. With a fish cage, a farmer can control predators like snakes and birds unlike in the old methods where one has to trim grass around the pond often,” he adds.

Ochanda has allocated Sh19 million from the CDF to invest in fish caging through the initiative Changing Food Situation in Bondo.

This, he said, will help supply 140 primary schools with fish and also provide a source of income to supplement schools budget.

“We plan to establish 300 cages to be shared among the schools and the initiative will also be extended to post primary institutions. The cages are expected to produce 600,000 fish worth Sh120 million after every seven months,” he says.

Ochanda added that they are looking forward to constitute a committee to manage the cages, with each school being allocated cages depending on the number of students.

The MP says in order to revive the fish economy, they are restocking fish in the lake and plan to establish two multiplication centres or hatcheries in West Yimbo and Central Sakwa.

“The first unit at Usenge is already started. The intention is to restock the lake with 4-6 million fish each year. Strategic restocking sites have been identified namely Wagusu Bay, Utonga/Warianda Bay, Kadimo (Oele-Nyandenge) Bay, Uwaria, Singu and Sare.

“Each of the bays will be managed by a Beach Unit Management in partnership with CDF office to make the locals own the projects and to prevent issues such as over-fishing and fish thievery,” says Ochanda.

Post a comment
WATCH: The latest videos from the Star
by MAURICE ALAL
Lifestyle
22 September 2015 - 00:00
Read The E-Paper