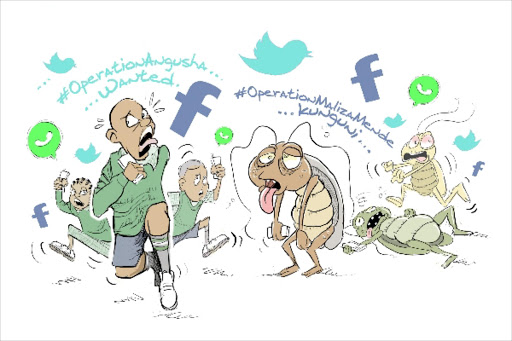 One of the most curious spectacles in Kenyan public life has to be the official opening ceremony. At this special occasion, while something new is being unveiled to the public, cameramen would be grouped together at one strategic position. When they are in place, the more the merrier it goes without saying, the designated VIP would do the honours. They would flag off food aid to one part of the country or perform a groundbreaking ceremony with them in a tractor. In the evening news on TV and the newspaper the next day, we would see this individual who does so much for the country in their hard hat or snipping away at a ribbon and marvel at their work.

For many years I thought that this kind of rigmarole was confined to parts of the Kenyan officialdom that needed to show the public they were properly earning their salaries and not leaving coats at seats all day. This was until I watched a news report where the security apparatus in the country announced they would launch a military operation in the full glare of the media. This operation called Operation Okoa Boni Forest was targeted at a forest on the border with Somalia and would be aimed at flushing out those who were threatening the lives of Kenyans. This campaign even included an accompanying Twitter hashtag and other social media components.

The thing about security operations is that I had always assumed they were carried out in secrecy. Many of them are done under the cover of darkness so that the enemy has no knowledge of how you shall be attacking them. This is because for an enemy to know your strategy and resources, a social media campaign would allow them to know everything beforehand by following the hashtag of the day.

This left me wondering – if the most equipped security forces of the land are trying to threaten their enemies by using social media campaigns, then perhaps the rest of us should try this method. Perhaps other sections of society should employ this innovative and technologically advanced method to scare their enemies. The beauty about this is that they would achieve their aims and even possibly get an award at the Social Media Awards of Kenya. These campaigns could be used in:

One of the scariest things that could ever have happen to a student for many years was to be given a “wanted”. In the Wild West movies that we all used to religiously watch in the past, a “wanted” was a poster that was placed on outlaws that were sought out by the sheriff who was always the good guy. In school “wanted” to you was a threat of a bashing by another student who was bigger than you. When a student was given a “wanted” they either had to flee before school was called out somehow or face their enemy at an appointed place.

In the social media age, I expect to see a slew of counter “wanteds” that are run on social media to ensure he or she who needs to get out of it could scare their enemy. I expect to see #OperationAngushiaColloWanted to start trending from a local school where Collo would be a much hated bully. When the big Collo sees that tweets then he will have no choice but to rescind all “wanted” threats that he put out.

It’s not just at school grounds that social media campaigns will come in handy. Imagine how effective these methods would be if a home decided that enough was enough. After using all manner of insecticides that promise 100 per cent killing power, the pests refuse to leave your home. Cockroaches still walk out in your living room when guests are visiting to your great shame. However much you spray and even sleep in beds under a treated mosquito net, you still have to contend with buzzing of anopheles in the middle of the night. And how is it 2015 and jiggers still roam the land? Enter the most effective new campaigns to counter those annoying pests. #OperationMalizaMendeKunguniMbuNaWengineo will go a long way to ending this menace. Once you start tweeting threats using this hashtag, you can be sure the critters, who are as Internet savvy as we are, will quickly vacate your premises never to return. What cockroach in its right mind wants to have its dinner in the garbage with the threat of a hashtag over it?

The plan wasn’t to review The Stronghold pub at the Madaraka Shopping Centre this past Sunday afternoon. There wasn’t much going on in live sporting action with the main football matches having being played in the English Premier League. The only big action on was the Ulinzi Vs Gor Mahia match that would possibly be the deciding one in the Sportpesa Premier League –this meant a lot of Nairobi folks were in Nakuru watching that match.

It was at this time that I found myself at the Madaraka Shopping Centre having a drink at one of those pubs with colourful names like Club Kutwa and Lips Pub. While here I was enjoying the sights of a typical Madaraka bar with hawkers coming in to sell all manner of products which are bought by people in bars such as belts, adaptors, phone chargers, triangles for cars and the like. When I was done I was directed to the back of the pub to take a leak and found an extremely clean washroom. As I walked out I noted at the back exit there seemed to be another place to drink. This was when I encountered The Stronghold.

The back end of the Madaraka Shopping Centre I discovered was a hotbed of drinking action for many Nairobi residents. Here there were several little pubs which were hosting punters of variety of types and numbers. The pub with the largest number of them this afternoon was The Stronghold. I had a seat and ordered a drink – a cold Tusker was retailing at Sh150, which is as reasonable as it gets.

The punters here were young and they looked to be waiting keenly for the big match between Ulinzi and Gor Mahia from Nakuru’s Afraha Stadium, which was screening on Supersport 9 East. I can only surmise these were the fans of the Gor Mahia that didn’t make it to the Rift Valley town to watch their beloved K’ogalo possibly lifting Kenya’s biggest football prize. Thus you could see them keenly following the proceedings on the TV and they were ultimately disappointed that they didn’t win the match.

A quick recap of the venue:

My verdict: It’s not the largest or most well decorated place to have a drink in Nairobi but it has a very cool crowd.

Post a comment
WATCH: The latest videos from the Star
by JAMES MURUA
Lifestyle
19 September 2015 - 00:00
Read The E-Paper