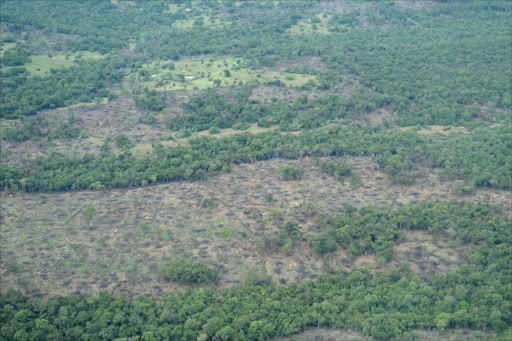 An aerial view of a section of Nyakweri forest in Narok County where illegal loggers are having a field day carting away over 1,000 bags of charcoal every day. Nearly fifty percent of the forest has been burnt down with fears that the water tower could be wiped out in five years.

The fate of a large forest in Narok hangs in the balance with fears that it could be wiped out in a couple of years.

The continued destruction of Nyakweri forest, located in Trasmara in Narok County, could adversely thousands of people around it.

The forest is a critical catchment of the Mara River and offers a breeding ground for elephants.

It also serves as a migratory corridor to elephants from the Maasai Mara game reserve to Ngurumani in Tanzania.

It supports diverse livelihoods of the adjacent communities through provision of water, food, wood fuel, honey, fodder for livestock and building materials.

WWF country director Mohammed Awer terms the forest as an important water catchment area critical to the survival of the Mara and Serengeti national parks.

Awer says in the last five years, there has been an increase in human activities around the forest adding that in two years, the damage done is irreversible.

“Data has it that over 1,000 bags of charcoal bags are ferried from the forest on daily basis for Nairobi, Kisii, Narok, Kisumu and even South Sudan,” he says.

He says that WWF is working with the communities involved by offering them beehives as an alternative way of income generation.

“The destruction of the forest could be the death knell for the Mara-Serengeti wildebeest migration which is the eighth wonder of the world,” says Awer.

Director General of the National Environment Management Authority (Nema) Geoffrey Wahungu says that over ten per cent of the forest cover on the Kimintet end has already been destroyed.

He terms the forest as a dispersal area for elephants adding that the national and county governments have a role to stop the degradation.

“One section of the forest is in good condition while the other is completely destroyed and there is need to bring all parties on one table to address the current situation,” he says.

Head of Kenya Water Towers Agency Francis Nkaku says the charcoal trade in the country is worth between Sh100 billion and Sh135 billion.

He says charcoal is one of the key drivers to degradation.

“Nyakeri forest is not gazzeted and the way forward is to allow farmers to grow trees in their farms and burn them for charcoal, which is a readily source of energy,” he says.

For those on the ground, the biggest problem is the high level of poverty, attacks by wild animals and failure to benefit from the forest and tourism proceeds.

According to Peter Ole Tomboi from Kimintet, the most degraded section, politics and scramble for land has contributed to the crisis.

The honorary warden says that 75 per cent of the forest cover on the Kimintet side has been wiped out by the charcoal burners with more trees going down every day.

“Land grabbing by some politicians and the need to ‘eat’ fast before the government comes in have largely contributed to the crisis,” he says.

Tomboi says there is need to urgently call a meeting between the two communities in the forest to seek a way forward.

The chief of Oloirien Location, Daniel Kuyia, points an accusing finger at his colleagues across River Operai for the current crisis.

He says his people have conserved his side of the forest but fears their neighbors could shift over once they cut all trees on the Kimintet side.

“Some of our community members are already tempted to join the bandwagon but we shall not allow the destruction of the forest that offers us water, pastures and honey,” he says.

The sentiments are area echoed by Samuel Nakada from Dubuto environmental group. He says that many of the people in the forest want quick cash at the expense of the environment.

“Poverty, climate change, illiteracy, drought and human wildlife conflict have played a critical role in the massive destruction for the forest,” he says.

One of the charcoal burners, Amos Maobe, defends the act adding that they have leased the land from the owner and the government is fully aware of that.

He says the trees or wild animals are not of benefit to the community but that charcoal is a source of livelihood.

“I earn Sh10,000 every week after paying my expense and we shall go into farming once the whole forest is cleared,” he says.