We consume 400 per cent more textiles than we did 20 years ago and all that comes at an environmental cost.

• In Kenya over 140,000 tons of used clothing are imported from various parts of the world such as Europe, the USA and Asia to name a few.

• Njuno said Completely out of Fashion Runway Show was to showcase their upcycled collections made entirely from post-consumer textile waste. 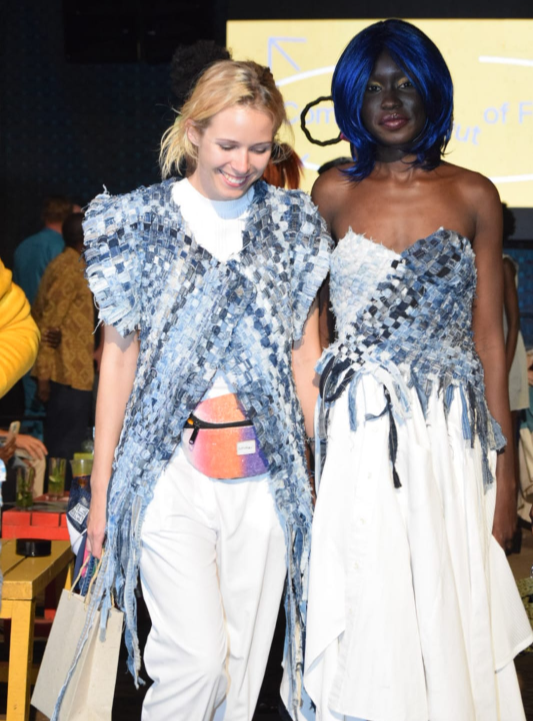 Fashion Designer Carol Ott with her model displays denim collection pieces during the Completly out of Fashion runway at the Alchemist on April 3, 2022
Image: CHARLENE MALWA

A section of fashion designers in Kenya have opted for environmentally friendly fashion.

In a statement, CXP Africa Project Manager Robin Mugani Njuno, said this is a move that will help protect the ecosystem.

From the program that has been initiated by an NGO called Reuse in collaboration with CXP Africa, 12 Kenyan fashion designers graduated from a six-month upcycling and incubator program.

Njuno said the Completely out of Fashion Runway Show was to showcase their upcycled collections made entirely from post-consumer textile waste. 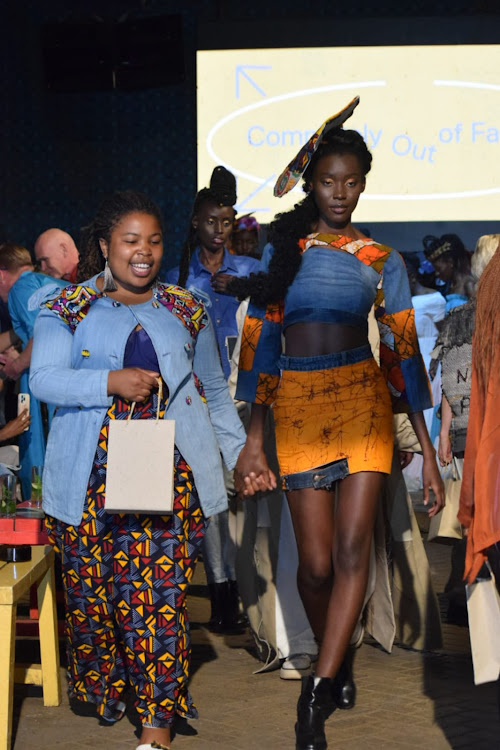 Supermodel Georgina Wanjala with her designer during the Completly out of Fashion show at the Al Chemist in Westlands on April 4, 2022.
Image: CHARLENE MALWA

"The designers will be accompanied by three fashion design students from the Estonian Academy of Arts, visiting Kenya in the framework of an exchange course program with Moi University, Kenya," Njuno said.

"The textile and fashion industry is the second biggest polluter in the world, with very few possibilities for recycling or extending its circularity."

Further, he noted that Kenyans consume 400 per cent more textiles than what they consumed 20 years ago and all that comes at an environmental cost.

"In Kenya, over 140,000 tons of used clothing is imported from various parts of the world such as Europe, USA and Asia to name a few," Njuno said.

According to the buyers of these clothes popularly known as ‘mitumba’, which is a term used for second-hand clothes imported from abroad, 50 per cent are of very poor quality hence are disposed of through either burning or landfilling.

"Completely Out of Fashion, run by Reuse NGO and CXP Africa, has been mentoring 12 young Kenyan female designers from marginalized areas who have a particular love for fashion- one that is conscious about its impact on the environment."

The designers were instructed by Estonian fashion designer Reet Aus, a long-time pioneer in upcycling design.

The manager said the workshop involved technical training and environmental awareness on the negative impacts of poor textile waste management.

"The project's main goal was to take them through a series of lessons about upcycled design as a method and tool for reducing textile waste, and also as a way for them to channel their creativity and love for fashion in creating pieces made out of textile waste," Njuno said.

"Aside from the environmental angle, the pieces of each designer's collection also showcase the cultural preservation angle, where the post-consumer ‘Mitumba’ as the material base was used to incorporate their designs and muses into the art they create."

While the first edition, 'Out of Fashion' took the audience on a journey from the fashion stages of Europe into the epicentre of mass production in Bangladesh, the follow-up focuses on the trails of post-consumer textile waste from Europe to Kenya, and its potential for reuse and upcycling.

How to be a sustainable fashion lover – and why it matters