Meet the model who doubles up as a livestock farmer

She has been in the industry for five years , bagging various beauty queen awards

• While off the runway, she feeds and takes care of her livestock; goats, and sheep in the village, she also supplies building and construction materials.

• Awuor has partnered with the Disability Discovery Association of Kenya to help fill the gap and empower women living with disabilities. 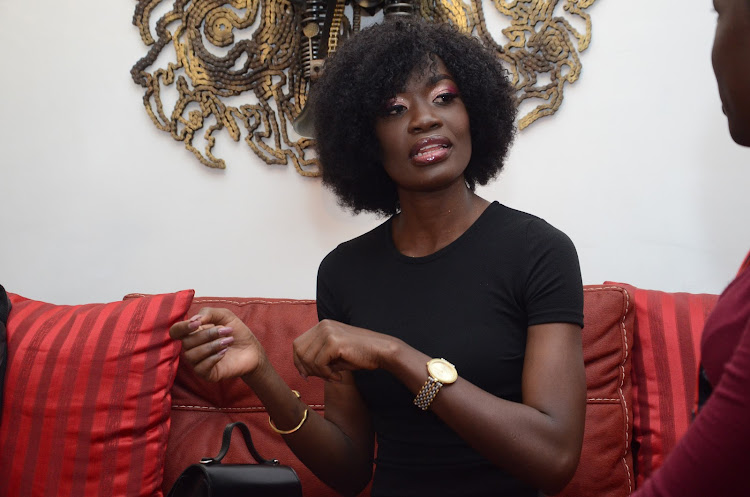 Celestine Awuor is the reigning universal Woman of Kenya representing the country globally.

While off the runway, she feeds and takes care of her livestock (goats and sheep) in the village. She also supplies building and construction materials.

When she drops off her wigs, heels, nails and make-up, she dives into taking care of her herds.

Her title is a new pageant in the fashion industry that seeks to harmonise and bring together women of all kinds, the young and old, married and single.

With this title, Awuor has partnered with the Disability Discovery Association of Kenya to help fill the gap and empower women living with disabilities.

The journey started when she was four. Her mother would give her heels to try on and she would constantly tell her she had model-like features.

She would also scout for modeling opportunities and link Awuor to try her luck. This helped her gain experience and runway courage, too.

After high school, Awuor registered for Kenya Fashion House and graduated with a certificate in modelling.

“My father is liberal, so when he asked what I want to do after high school, I told him I want to be a model and he empowered me,” Awuor told the Star during an interview.

She has been in the fashion and modelling industry for five years now. Among her awards are beauty queen at Zetech University and Miss World Kenya representing Siaya county at the national competition among the top 10.

She has also represented various big brands, including Ciala Resort and Melili Hotel.

Awuor has been featured in an international film that is yet to be released. She couldn’t release its name; she wants it to be a surprise to her fans.

“I anticipate being featured in more international films and walking on big runways, and I'm representing Kenya next year in Dubai,” she said.

Awuor will be representing Kenya in various lengths of empowering and raising the female gender.

This, she says, will help embrace our diversity and bring change to the stereotypical thought that being female is part of a 'minority.'

Apart from Awuor, Maureen Nzisa, Miss Face of Humanity Kenya, was also selected to be the DDAK goodwill ambassador.