Sophia sees the world coming to an end

• Just when Makini thought Sophia is flawless, he discovers her Achilles’ heel 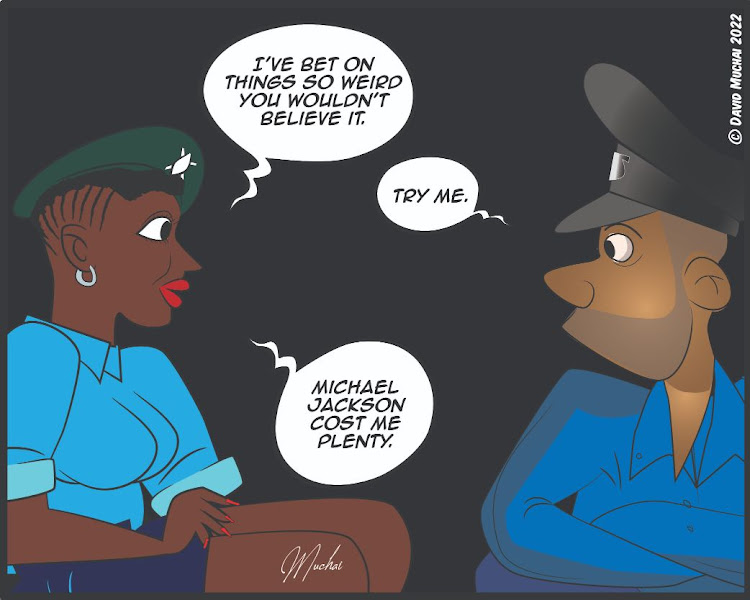 A crisis is brewing in Jiji Ndogo, and not the kind I or anyone else would’ve expected. The only good thing to come out of this predicament is that I’m getting to see a side of my (hopefully) future wife I would otherwise never have come across.

Ever since Sophia showed up in Jiji Ndogo, she’s been the embodiment of a proper police officer. In fact, at times she’s been so good at her job that I and the boss Inspector Tembo (her father, no less) have been scared of her, wondering what steps she might decide to take against our legendary lackadaisicalness. Now, with the just-concluded World Cup, her Achilles’ heel has come to the fore: gambling. Or more precisely, her addiction to it.

“I’ve bet on just about everything,” she tells me in a moment of uncharacteristic candidness. “I’ve bet on things so weird you wouldn’t believe it.”

“Nothing weird about that. People do that all the time.”

“Do they bet on celebrity deaths?”

“Michael Jackson cost me plenty. I have 15 grand on intelligent life being discovered in outer space before 2030.”

“Yup! If only someone has the balls to own up to the small green people, I’d have a handsome payout, very handsome amount of moolah. Oh, and I have money on Robert Sarah.”

“Who’s that — a celebrity about to die?”

“No, silly. He’s a Catholic Archbishop from Guinea. I have him down for the first black Pope.”

“An African pope? I know little about the Catholic church, but a black dude isn’t about to don that pointy hat and carry that Pope’s stick any time soon.”

“Papal ferula — that’s the name of ‘that Pope’s stick’. But what if you’re wrong? You know, about Robert Sarah? What if you and thousands of others like you are wrong and he gets the job? Boy, oh boy. I’ll be spending my time sipping tropical Pineapple Rum Cocktails in the Bahamas.”

I shake my head in disbelief. “You do take this stuff seriously.”

“I take my wagering very seriously, indeed. Even when I bet on who catches a cheese wheel rolling down a steep mountain.”

“A traditional event in a place called Gloucester in southwest England. Very popular with bookies.”

“Some of it sounds illegal. I mean, betting on deaths and stuff?”

“You think? That’s like saying by me betting against France, I made Mbappe’s hat-trick useless. I had nothing to do with it. Just predicted an outcome. I have you down for ‘2072 peacefully in bed.’”

My jaw hits the floor. “You’ve bet on my death?”

“Calm down, Makini. It’s fifty years from now. You’ll be nearly eighty years old, surrounded by a bunch of grandkids.”

“It’s still wrong. You shouldn’t bet on when anyone of us gets to… to…”

“To die? You can’t even bring yourself to say the word. It happens to every one of us, sweetheart.”

“Still, people shouldn’t be allowed to bet on it. Wait! What am I doing? I meant to tell you Inspector Tembo and I have decided to stage an intervention.”

“Yes, you do, honey. By your own admission, it’s gone too far. MJ’s death? Rolling wheels made of food?”

“Don’t forget the end of the world.”