It follows three intertwining stories of talented footballers torn between crime and the promises of soccer. 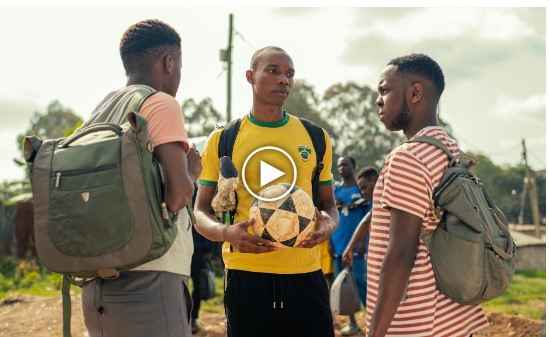 Showmax has unveiled the trailer of the upcoming crime drama series Pepeta, which is set to show officially on November 24.

Pepeta is based on the real-life story of Harun ‘Rio’ Wathari.

The eight-part series captures the dreams and realities of the youth in Kibera, known for churning out the top football players in the country.

Pepeta follows three intertwining stories. Junior is a 17-year-old talented footballer torn between the thrills of crime and the promises of soccer.

Kepha is an unforgiving cop with a personal vendetta, determined to rid the streets of criminals.

And Biki is an ambitious football coach determined to get Junior and his friends scouted before the barrel of the gun cuts short their dreams.

The series will feature predominantly young casts, including some who have never been on screen before.

Damaris Irungu (Crime and Justice), Charles Ouda (Waiting Room, Makutano Junction), and Abigail Arunga (How to Find a Husband) are the writers.

“I had to dig deep into my experiences, especially working with young first-time actors. I really had to go back to my acting days and put myself in their shoes, guiding them through the process, and helping them tap into the small things that define their characters. It was a very fulfilling experience,” Mbaya said.

Pepeta builds on the success of other Showmax Originals in Kenya like the political thriller series County 49, the thriller series Igiza, the police procedural and legal drama Crime and Justice S1 and S2, the drama series Single Kiasi and the coming-of-age film Baba Twins.

Lung’aho is looking for more diverse roles that will push him even further away from his comfort zone.
Sasa
5 months ago

Janet Mbugua’s bro: I was a suicidal junkie

Kevin could make a call and get cocaine in 15min anywhere in Nairobi
Sasa
6 months ago
Post a comment
WATCH: The latest videos from the Star
by MARGARET WANJIRU Health & Lifestyle Journalist
Entertainment
15 November 2022 - 09:48
Read The E-Paper