Life goes on at Jiji Ndogo

At the hotel, shop and bar, people have moved on from the election 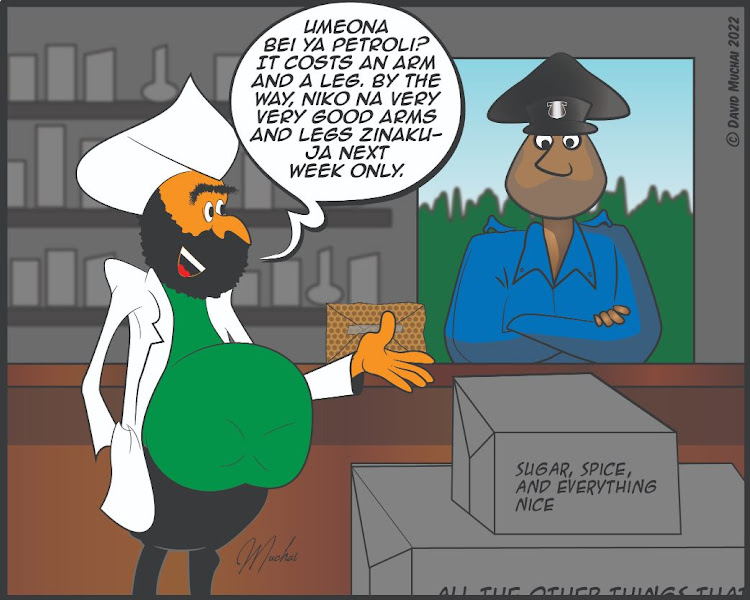 Now that elections are over and we no longer have “the tense season” as a handy excuse for everything, life must go on at Jiji Ndogo.

Fatma Nono is back making her greasy chapos and questionable ndengus at Kula Ulipe hotel (if you can call a rust and soot mabati shack by the same description you give The Grand Regency).

At Mla Chake Shop, Dr Selitol, who could’ve sold votes were it legal to, resumes selling everything at exorbitant prices.

“I have to transport everything from Nairobi only,” he justifies the broad daylight robbery. “Umeona bei ya petroli? It costs an arm and a leg. By the way, niko na very very good arms and legs, zinakuja next week only. Of course, ni za viti.”

At Supa Sinema, our very own IMAX movie theatre — without the IMAX and the theatre — folks are back getting their daily dose of Nigerian DJ movies and their ever-present hoards of cats that somehow always turn into witches before the credits roll.

And for that cold brew that makes you forget all your troubles (or adds to them, depending on what side of the fence you are on), there is always Shimo la Pewa, where the cold brew is mostly warm and the hot bar waitress is 70-year-old Pamela, who’s missing some teeth and most of her hair.

She’s very nice, though, and will execute a respectable headstand for Sh200. Provided you ask for the stunt earlier on during the day before she has sampled from the customers’ carafes.

Conveniently placed next to Shimo la Pewa is Nyama ni Nyama, our very own butchery, where the aptly named Wanyama will serve you fine cuts of meat, while forbidding you to question what brand of animal you will be consuming that evening.

Unfortunately, it’s either Wanyama’s nyama or plain sukuma wiki for you. Since I’ve been a resident at Jiji Ndogo, it is my sincere belief that I have devoured anything from donkeys to gazelles to dik diks and road kill.

One night, in a bid to impress Sgt Sophia and present myself as the best male specimen for her future children, I made a meal of spaghetti and meat.

The spaghetti came out lumpy and slithery. Then again, when are they ever not, right? The meat looked and smelled like the great Gordon Ramsey himself had attended my kitchen.

I thought I had outdone myself until we sat down to eat. A bite of meat took at least five minutes to chew down. It was like munching on raw giraffe hide.

Don’t get me wrong. I’ve never had occasion to feast on uncooked giraffe, but if I did, I’m sure it would’ve taken such a battle to masticate.

After dinner, Sophia put it better than I could have: “Sgt Makini, I think we just feasted on the carcass of a cape buffalo.”

I considered offering my giraffe theory, but I thought it inappropriate talk at a romantic dinner table.

Thank God for Sophia’s good sense of humour. Otherwise, she wouldn’t be the most beautiful fiancé to have graced God’s good earth.

The only problem is, she never fails to bring up the issue of tough meat at almost any dinner I make her.

Like the lady she is, she would swallow the last bite and dab her mouth with a fold of toilet paper (you can spot a Dodo before a serviette at Jiji Ndogo).