Getting back to a new normal 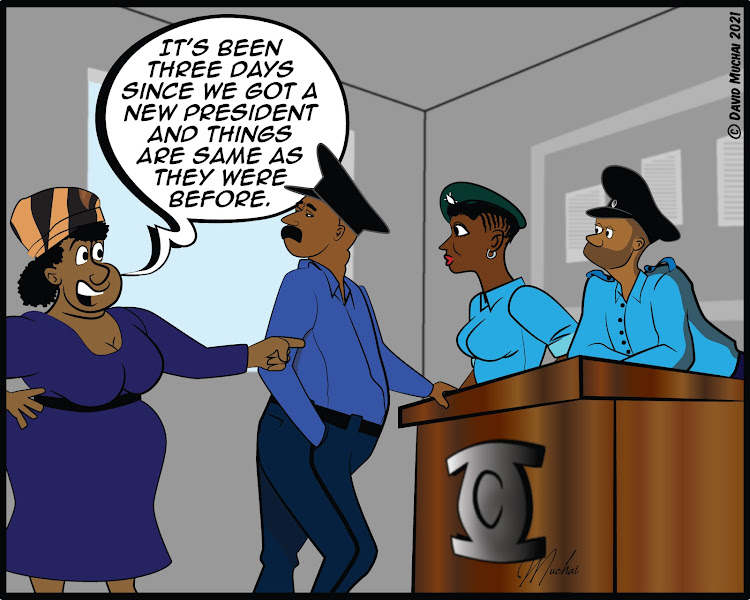 The election season, with its hopes and shattered dreams, is over. Some fears came true as optimistic candidates fell, and luckily, some fears never came to fruition. Peace reigned supreme and it’s time to go back to our daily lives.

Did I just say it’s peaceful? I meant the country in general. Here at Jiji Ndogo, there is everything but tranquillity.

For starters, I have a court date in a week’s time. Wa Munene is being arraigned for stealing my gun and using it to kill an old man. I’m the state’s star witness and I’m not looking forward to the ordeal.

My girlfriend, Sgt Sophia, has moved back in with her father, my boss, Inspector Tembo. To see her, I now must go through him, and he’s making it as hard as humanly possible. At every given opportunity, he likes to remind me that he’s not only the father of the woman I love, he’s also my boss. Basically, it means he can ruin my life from all fronts.

As if that’s not bad enough, Chifu has it in for me, accusing me of being the reason his son is in prison.

“He stole my gun and committed murder,” I keep telling him.

“What’s so special about your gun?” He brandishes his AK-47. “Why didn’t he take mine?”

The rest of the conversation morphs into the absurd.

“If he doesn’t come home,” Chifu says as a parting shot, “you’re dead, Mr Policeman. You hear that? Dead!”

“And you call me crazy,” says Mwenda, our resident crazy man as he passes by. “You know what they say — never argue with a fool.”

“Isn’t that how the saying goes?”

“Mwenda, I believe that’s how it goes.”

He shakes his head. “What am I doing arguing with a fool?”

He walks away, leaving me full of questions. But not for long. Nyaguthii, the village gossip, and a horde of hangers-on, troop to the police post.

“We demand another election,” she proclaims.

“It’s been three days since we got a new President and things are same as they were before.”

“You gave him three days to make such profound changes? Allow him at least 100 days in office before throwing accusations.”

“Sgt,” says Nyaguthii seriously, “do you know how long it takes a person to die of hunger?”

“I don’t know exactly how—”

“Neither do I, but it’s less than a hundred days.”

“Four days without water or food,” says Mwenda from the back of the crowd. “Three weeks if he has water.”

“Which means,” continues Mwenda, “if it’s that bad for you, you should already be dead. You want some bread?” He removes a stale, crumpled loaf from his pocket.

Nyaguthii is unfazed. “Either he makes changes real quick, or we hold a referendum to throw him out.”

“You’ll need a million signatures for that,” I say for lack of anything better. “Where will you get a million people to agree with you?”

“Like the Chinese verb goes,” says Mwenda between bites of his loaf, “a journey of a million miles begins with a single step. She is (he counts) six steps in already.”

“I think that’s incorrect,” I retort. “The saying talks of a journey of a thousand miles, not a million.”

“Quit ignoring us,” Nyaguthii says. “This is important.”