Travelling theatre not only involves acting but also singing and dancing 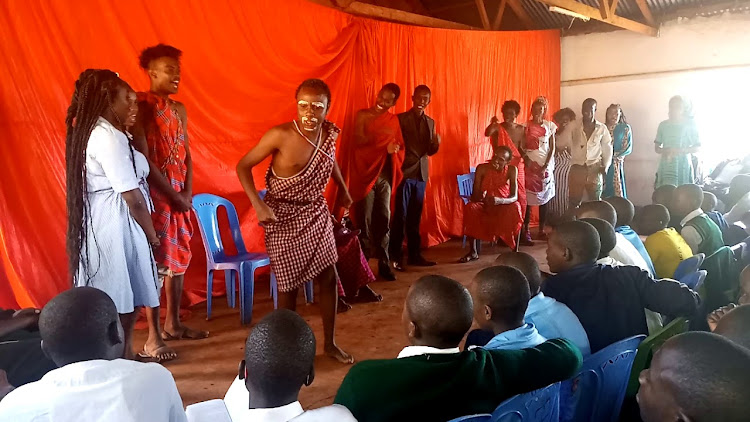 Actors perform 'Blossoms of the Savannah' for students
Image: COURTESY

Reading set books in high school might have been fun for some and boring for others to the extent of serving as lullaby sessions.

I don’t know about you but as for me, I enjoyed reading plays as compared to short stories and novels, which were most of the time compulsory set texts.

The most memorable thing when it came to set books was the entertainment that came with it.

I had an imaginary mind back then, I still do, but when I was in secondary school, whenever I read a book, I would create vivid images based on the story I was reading.

Most of my secondary school classmates never missed to pay up to watch set book performances, and neither did I.

Apart from the time set aside for entertainment on every Saturday evening, watching staged set books was always entertaining and sort of a funkie.

Most set books have the same message but are portrayed in different stories.

Some memorable English set texts include Half a day and other stories, Whale Rider, River and the Source, Caucasian Chalk Circle, An Enemy of the People, The River Between, Merchant of Venice and The pearl.

After completing high school, I still enjoyed the thrill that came with acting and generally just being on stage.

My journey in travelling theatre started immediately I was through with high school.

Just like many other actors from different theatre groups I had shared the stage with, set book acting served as a good space to grow talent in performing arts.

I was groomed by some of the best producers of different travelling theatre troupes who occasionally graced us with appearances on national TV.

As an actor who was always on the road to go and perform for different students in secondary schools, I slowly started becoming notably good in performing arts.

I remember my producer telling me that travelling theatre would create for me much better opportunities.

I still believe it would, but I decided to give up acting for a while.

Travelling theatre came with intense hours of training and practice, reading, understanding and comprehending phrases from set texts, and basically being able to memorise and showcase sterling performances.

This was no different from rehearsing drama and music festivals.

The only difference came with the amount of time invested in rehearsing, the pressure and the fact that travelling theatre involved getting paid.

Travelling theatre, or rather, set book performances, play a big role in grooming an artiste.

It not only involves acting but also singing and dancing.

The longer I stayed in theatre, the more I gradually became a super narrator and was able to perform any character, male or female, simply because I understood the character and what they said.

You would wake me up from my sleep and ask me to narrate a paragraph from Blossoms of the Savannah, for example, and I could.

Students and literature teachers in secondary schools normally have a challenging experience when it comes to drama texts.

They say it is hard to comprehend drama texts through mere reading in class, and that the texts are meant to be actualised through performances.

Set book actors also play a part of teachers who educate but use entertainment, hence, edutainment.

Most of our actors in Kenya today pay tribute to their time spent in travelling theatre as they learnt about what art is all about and they were able to grow their talent.

Set book performance plays a crucial role in grooming artistes, even if one never attended a performing arts school or even never became a member of the drama team.

Attending auditions always presents a high chance for artistes to develop their potential.

Travelling theatre presents a new way of tapping into one’s potential in the art industry.

One might audition for on screen acting and miss but can get a chance to give a sterling live stage performance.

If you have a talent in acting and have been auditioning for on-screen acting jobs without succeeding, you can try acting set books.

Your producer might be asked for talents to feature in a movie or series and might just recommend you.

From personal experience, it is fun, has a fair pay depending on how long you have been in the theatre space, opens doors to better opportunities, depending on the talent growth, and you get to network and make new friends.

Oh, and you get to travel and experience new places.

For Form 4 leavers who have a passion in acting, go for the auditions.

Post a comment
WATCH: The latest videos from the Star
by MELINDA KIRWA
Entertainment
03 September 2022 - 04:00
Read The E-Paper