The comedy does not overshadow the seriousness of the subject matter 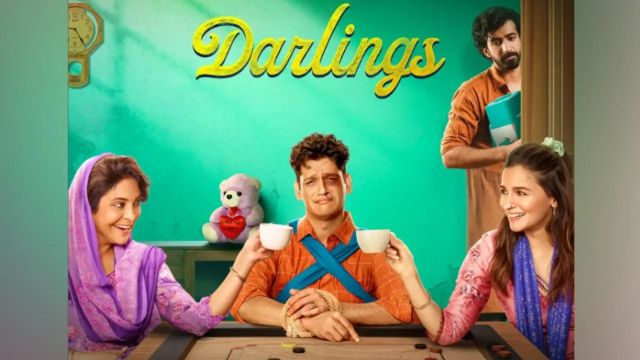 'Darlings' is a dark, satirical film about the cycle of domestic violence in a family and the psychological effects on the abused.

Badru is married to the alcoholic Hamza. Hamza is a sweet, loving man when he is sober, but once he drinks, he turns into an insecure, angry man, taking out all his frustrations on Badru at night. In the morning when he is sober, Hamza apologises profusely and blames it on the devil that is alcohol.

When Hamza finds out his liver is damaged, he pretends to have stopped drinking for Badru’s sake and dangles the idea of having a baby. Badru, who has long dreamed that a baby would be the end of Hamza’s bad habits, is excited at the idea and even ends up cutting her mother off.

Shamshu, Badru’s mother, is a tailor and aspiring caterer, who uses the simple Zulfi to do her bidding. Shamshu lives across in the same block as Hamza and Badru. All the residents of the plot are aware of Hamza’s violent acts towards his wife but no one intervenes. The residents are approached by a developer who wants to turn their old dwelling into an upmarket apartment building. They readily accept the terms but Hamza refuses and the project is stalled.

When Badru gets pregnant, she reconciles with her mother and Hamza apologises to Shamshu for hitting her. All is well for a time, but Hamza cannot help but turn into his old self when he is upset. He throws his wife down the stairs and she has a miscarriage. Traumatised by the incident, Badru returns home determined to give Hamza a taste of his own medicine.

Shamshu and Zulfi help Badru carry out her revenge mission that gives Hamza an insight into being the abused one in a relationship. Badru also grapples with the overwhelming feelings of being an abuser and wonders if it is all worth it.

The film executes the satirical component flawlessly. The comedic aspect does not completely overshadow the seriousness of the subject matter; neither does the severity of the issue turn the film into a gloomy watch. It is a well-balanced film that poses big questions for the viewers in the end. Are we products of our environment or can we be more than that?

The actors are so engaging that one cannot help but feel like a part of the community. Watching the film is like watching the events unfold from your window in the apartment across the street. The film is a bit lengthy with unnecessarily drawn-out dialogue, but it is a decent watch.

Post a comment
WATCH: The latest videos from the Star
by Nabila Hatimy Entertainment Writer
Entertainment
27 August 2022 - 08:00
Read The E-Paper