•She put smiles on all our faces and left us with fond memories that will linger.

•It was reported that she collapsed at a gathering from where she was rushed to hospital but was confirmed dead on arrival.

She put smiles on all our faces and left us with fond memories that will linger. Like a true gem, Ada Ameh will shine brightly in all of our hearts forever.

Popular Nollywood actress Ada Ameh will be buried in her home state, Benue in Nigeria on Friday, August 26.

It was reported that she collapsed at a gathering from where she was rushed to hospital but was confirmed dead on arrival to the hospital. 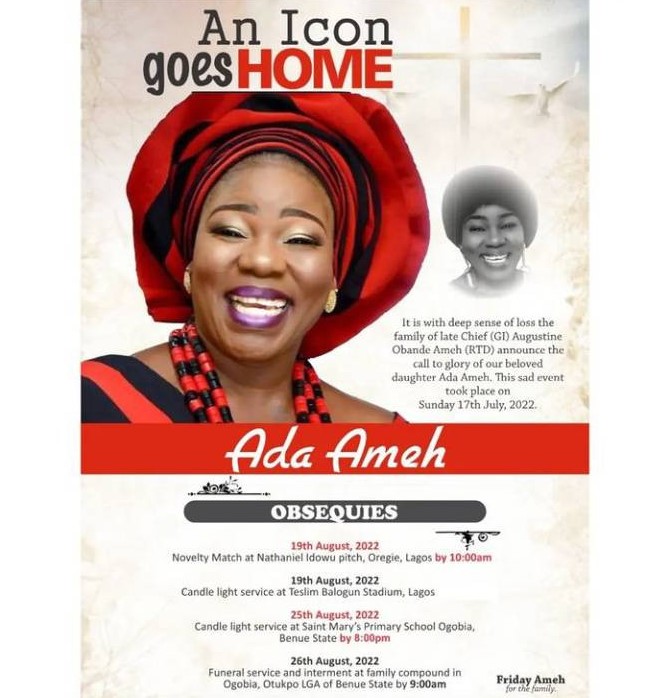 According to arrangements made by her family, a novelty match and candlelight service will be held in her honour on Friday, August 19, 2022, in Lagos, Nigeria.

Then on August 25, another candlelight service will be held in her hometown, Benue before she is laid to rest in Ogobia, Otukpo, Benue.

The cast and crew of the Africa Magic family drama also joined other fans in mourning the actress.

Actor Charles Inojie who plays Mr Johnson and Emu’s husband in the series shared a picture of the actress on his Instagram.

He wrote, “It has taken a while to authenticate this sad news before going public under advisement from Ada’s manager who was on his way to Warri to secure physical confirmation of the horrible news that hit us all this morning.”

Africa Magic also shared an emotional tribute to the actress on their official Instagram page.

“Farewell to a gem, Ada Ameh. Your passion brought so many smiles and love to families beyond measure. You will be missed. From all of [email protected] Africa Magic.”

It continued, “A rare gem has left our presence on earth, but she will forever be in our hearts. ADA AMEH, you brought so much light, love, and laughter to our screens and homes.”

The news of her passing was announced by the President of the Actors Guild of Nigeria, Emeka Rollas.

The actress a few weeks ago opened up about her mental health challenges after losing some family members.

Before 2020, the actress lost six of her siblings.

The actress-comedian lost her only child,  Aladi God gift, who was over 30 years old on October 20, 2020, after unsuccessful surgery.

She started battling with ill-health and her condition deteriorated after losing another sister in March 2022.

“Everything is going to be fine. I have an issue right now, and it’s taking my life. I will not die. We will get over it.”Ameh said during a TV interview.