Jiji Ndogo is bracing for change on Aug 9 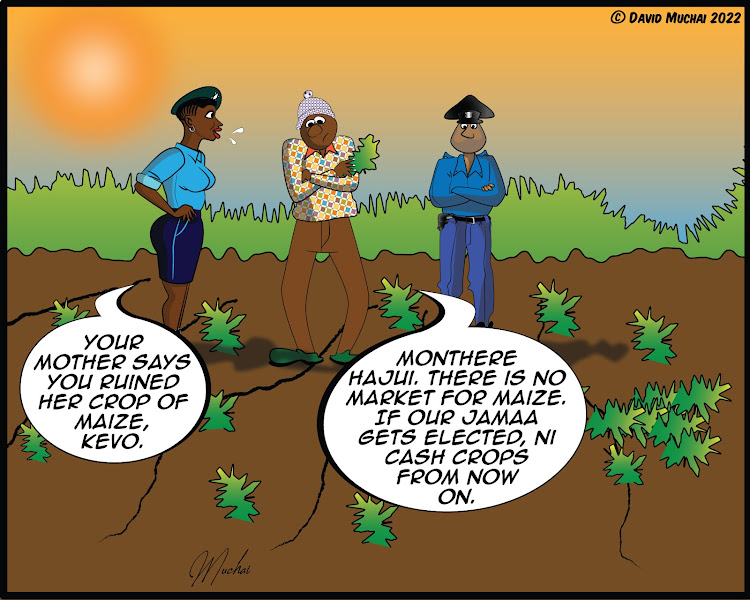 When a hysterical old woman staggers into the police post barely breathing, Sgt Sophia and I brace for bad news.

“Askari!” She’s hardly audible, doubled over as she is and talking between mouthfuls of air. “Askari!”

“Take your time, madam,” Sophia says, placing an arm on the woman’s back. “Unless it’s an emergency that can’t wait?”

“Kevin!” Now the name registered. “We know him as Kevo. He’s your son? What has he done now?”

“Maybe you should show us,” Sophia suggests.

For an old lady, Kevo’s mum can surely swing a leg. Sophia and I have to quick-step to keep up with her pace.

“When you say he ruined your farm,” Sophia says, “do you mean he destroyed your crops?”

“Was he high?” I say. “Kevin is known to indulge in recreational marijuana.”

“You’re right, Mama Kevin. There is no excuse for malice. Where is your son now?”

She promises we will find him at the farm and sure enough, that’s where we find him. If his mother had planted maize on the field, there is no sign of it. Kevo is as busy as a worker bee planting other seedlings in the cultivated field.

I pull him up by the back of his trousers. “What are you doing?”

“What does it look like I’m doing?” he yells. “Napanda cash crops.”

“Your mother says you ruined her crop of maize. Who gave you permission to invade her farm?”

“Monthere hajui. There is no market for maize. If our jamaa gets elected, ni cash crops from now on.”

Sgt Sophia uproots one of the plants and scrutinises it. “Dear Lord. It’s weed.”

“He’s replacing maize with weeds?” I ask and turn to Kevo. “What have you been smoking?”

“Until your jamaa is elected, it’s still illegal to plant bhang, Kevin.” Sgt Sophia puts him in handcuffs. “So for now, I’ll have to arrest you for the illegal manufacture of contraband.”

“You know what, we need to tell him to get rid of cops. Watu wajitawale.”

“I’m no criminal. You’re arresting me while I was working in my garden. Wale wabaya they can face mob justice. Si mlishindwa job yenu, you saw what we did with Masten Wanjala?”

“Kevin, I advise you to shut up before you get yourself into more trouble.”

“I’m sorry, but if you keep it growing in your farm,” I inform her, “I’ll also arrest you for the same crime as your son.”

Kenya Election 2022: A basic guide to the vote

In this election, people are very much thinking about their pockets - economy.
News
2 months ago
This is what should scare you, Ruto promises radical changes
Post a comment
WATCH: The latest videos from the Star
by David Muchai LLB Writer, Author & Content Creator at XLNC Media Inc
Entertainment
07 August 2022 - 06:00
Read The E-Paper