The first Black Panther film took over a billion dollars at the box office.

•The current tranche of films and TV shows is known as Phase 4 - and Marvel Studios head Kevin Feige confirmed it will end with Wakanda Forever on 11 November.

•Phase 6 will end towards the close of 2025 with two films: Avengers: The Kang Dynasty, and Avengers: Secret Wars. 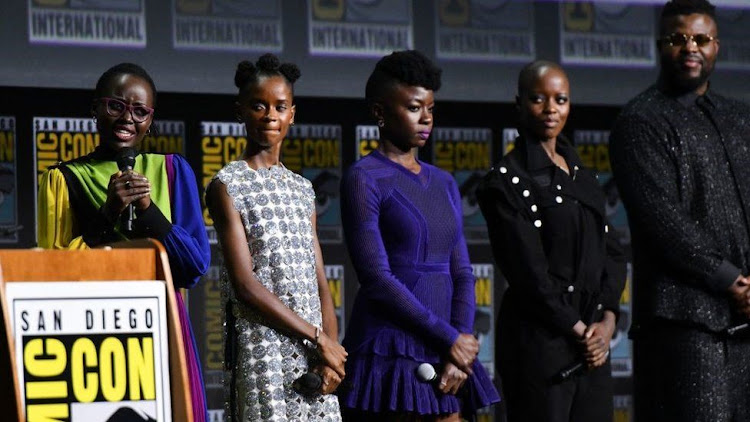 Marvel Studios has unveiled the trailer for November's Black Panther: Wakanda Forever to eager fans, who roared their approval in a boisterous session at Comic-Con in San Diego.

The film is the sequel to 2018's Black Panther, which starred the late Chadwick Boseman as T'Challa, the heroic crime-fighting king of Wakanda, a fictional African country with incredibly advanced technology.

The trailer opens with a female vocalist singing No Woman, No Cry, but there were some tears on stage as Boseman's castmates spoke of how much it meant to them to honour his memory through this new project.

Ryan Coogler, returning as director, spoke about how excited the T'Challa actor had been to see the first Black Panther footage five years ago at Comic-Con.

Ryan Coogler is returning to direct Wakanda Forever, which appears to involve a conflict with Atlantis

Also reprising their roles are British star Letitia Wright, who plays Shuri - the Black Panther's sister - and Oscar-winner Lupita Nyong'o as Nakia, an undercover spy in service to Wakanda.

Before the cast took the stage, a group of musicians and dancers playing African drums and vocalising gave a spine-tingling performance that had the crowd on their feet.

Wakanda Forever will introduce Tenoch Huerta (Narcos: Mexico), as anti-hero Namor McKenzie, known as the Sub-Mariner - confirming a long-standing casting rumour. Namor, who rules the watery kingdom of Atlantis, is the film's antagonist - with the trailer hinting at a conflict between Wakanda and his people.

Addressing the fans, Huerta shared an emotional perspective on the power of inclusion, saying: "I come from the hood, seriously. And thanks to inclusion, I'm here. A lot of kids are there in their hood, looking at us, dreaming of being here. And they are going to make it!" He went on to add his thanks in Spanish.

Other new additions to the cast include Michaela Coel (I May Destroy You), and Dominique Thorne as Riri Williams / Ironheart - a teenaged inventor who becomes a superhero (and will get her own show on Disney+ in 2023.)

The first Black Panther film took over a billion dollars at the box office, becoming the first superhero film nominated for the best picture Oscar - and a cultural milestone for diversity in filmmaking.

Marvel previously confirmed it would not be re-casting the role of T'Challa, a decision that has divided fans - some feeling it should forever belong to Boseman, who died of colon cancer in 2020, and some voices - including Boseman's brother - saying it should pass to a new actor.

There has been speculation that the panther suit could now go to Shuri, and while that wasn't confirmed - the very final frame of the trailer features a telltale flash of the Black Panther claws.

For readers unfamiliar with the Marvel Universe - it's a sprawling place filled with dozens of overlapping characters, which its creators try to make more manageable by grouping projects into "phases".

The current tranche of films and TV shows is known as Phase 4 - and Marvel Studios head Kevin Feige confirmed it will end with Wakanda Forever on 11 November.

But teasing fans with a peek at the future, he also lifted the curtain on Phase 5, confirming that Ant-Man and the Wasp: Quantumania - which stars Paul Rudd as Scott Lang / Ant-Man - will launch the new film cycle on 17 February. 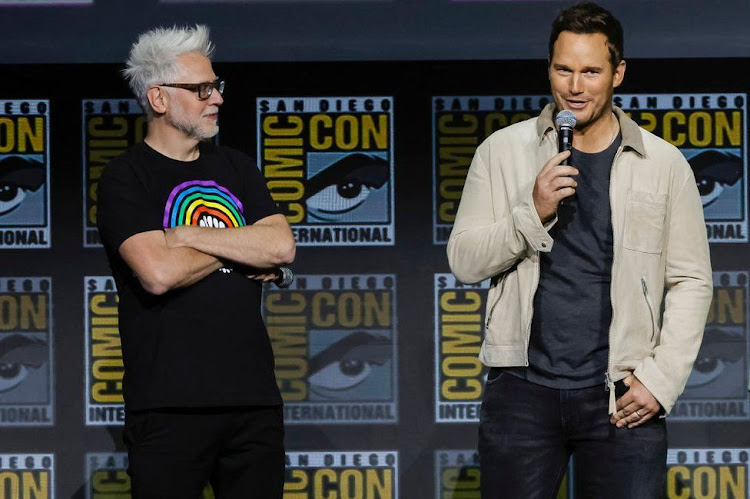 Joining Feige on stage with the rest of the cast, Rudd was asked what his character has been up to lately.

"Scott is pretty pleased with himself for his role in saving the universe," he confirmed, a reference to previous Avengers films that got a big laugh.

Guardians of the Galaxy: 'What they really do is save each other'

Next in line will be Guardians of the Galaxy Volume 3, the final instalment of the space saga, set for release on 5 May. Director James Gunn got teary as he recalled pitching the franchise a decade ago this week in North Carolina, where Iron Man 3 was being filmed.

"They've saved the universe a few times, but really what they do is save each other," he said.

"This is the end of that story. I'm saying some stories have an end. It doesn't mean everybody dies!"

Gunn was joined on the famous Hall H stage by the film's cast, and Chris Pratt (who plays Star-Lord) confirmed it was the first time the cast had seen the trailer - "it's beautiful!"

The gallop through Phase 5 continues with The Marvels - in which Captain Marvel joins forces with Ms Marvel and Spectrum, aka Monica Rambeau.

And it will conclude in July 2024 with Thunderbolts - but there was no team reveal today, so fans will have to wait a little longer to learn who's in it.

Feige then skipped further forward to Phase 6 - confirming that the cycle will feature The Fantastic Four, release date 8 November, 2024 - but again, no casting just yet.

Phase 6 will end towards the close of 2025 with two films: Avengers: The Kang Dynasty, and Avengers: Secret Wars.

While Marvel doesn't reveal in advance what it will discuss at San Diego Comic-Con - a major pop culture event where some of the most successful films on record have debuted - its announcements are Saturday's hottest ticket.

So far, 2022 has already seen the release of Doctor Strange in the Multiverse of Madness, starring Benedict Cumberbatch as the doctor-cum-master of the mystical arts, and Thor: Love and Thunder, as well as TV series like Moon Knight and Miss Marvel.

TV series She-Hulk: Attorney at Law, is smashing its way to Disney+ in August, and got its moment in the spotlight with a cast appearance. The final trailer sees the character adjusting to life as a superhero - helped by her cousin, The Hulk / Bruce Banner, whose assistance appears to include rock throwing and occasional yoga.

And another fan favourite, the Avengers founder Nick Fury (Samuel L Jackson), will get his own series - Secret Invasion - from spring 2023 on Disney+.

The singer said the payment was the highest amount he has ever received from a gig.
Sasa
3 weeks ago

The value of the firm's shares has dropped more than 60% so far this year, as investors sour on its prospects.
Sasa
4 weeks ago

Anthony Hamilton talks music, culture and growing up in Church

Hamilton attributes his music and growth to his hometown where it all began.
Sasa
2 weeks ago

'We did it': Bennifer tie the knot in Las Vegas

The nuptials come 17 years after they called off their first engagement.
Sasa
4 weeks ago