I get my badge back, and it’s a puky affair

Makini is shining on his first day back to work, but the gloss is ruined

• When it comes to emptying the stomach, you never know when the craving will strike 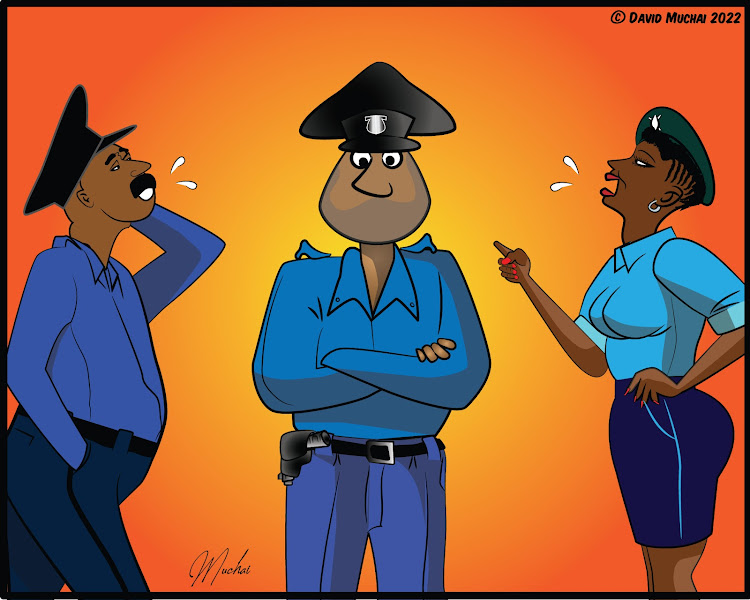 Now that Wa Munene, Chief’s son, has confessed to stealing my gun and using it to commit murder to frame me so he can have Sgt Sophia all to himself, I am cleared (temporarily until the trial) to carry my badge and get back my gun. It’s a huge honour that I don’t dare take lightly.

First thing I do is go back to the crib, take a good, long shower, and then don my crisp police uniform. Too crisp, I might say. I’ve been taking it out and ironing it almost every other day. The creases are so sharp, you could cut meat from our local butchery Nyama Si Nyama with it. And let me tell you, Nyama Si Nyama sells meat from cows that used to run marathons and lift weights. Yes, meat that tough.

When I get to the police post, everyone — Tembo, Sophia and Wa Munene — they all fall deathly silent. Then, all of a sudden, they start laughing. And I mean falling over themselves with laughter. Even Wa Munene is laughing. Only Gundua remains stoic.

“What happened to your uniform?” Sophia asks. “It looks like it’s been ran over by road roller.”

“And it’s so shiny,” adds Inspector Tembo. “Have you been oiling it or something?”

I face Wa Munene. “And what are you laughing at?”

To Gundua I say, “What about you, huh? Don’t you want to join in on the fun?”

He shakes his head. “It’s not my style.”

“Thank you.” I turn to the others. “See? There’s a man who understands the importance of looking sharp.”

“I didn’t say I condone the torture you’ve been putting your uniform through,” Gundua says, ruining my newfound respect for him, “I just don’t kick a man when he’s down.”

“Good thing you don’t have to pin it on your uniform,” says Sophia. “I doubt a pin could go through that metal.”

“Very nice, Sophia. Have a laugh at my expense.”

She kisses me on the cheek. “You know I do it cos I love you.”

Inspector Tembo quickly separates us. “What did I tell you about all this public show of affection?”

“Not during working hours?” I ask.

“Who cares about that? I said not until you bring me real breathing cows. Now, I’ll be in charge here while all of you transport the prisoner to Kericho in detective Gundua’s car.”

We pile into Gundua’s Probox. In charge of sitting arrangements (because it’s his car, you might think, but I can read his dirty mind as if it’s Hello Children), Gundua puts Sophia in the front with him, and I guard Wa Munene in the back.

“Shouldn’t Sophia sit back here, too?” I protest. “We should put the prisoner in the middle.”

Halfway through the journey, Wa Munene starts writhing. This alarms me.

“I get car-sick. I have to eat orange rinds every time I get in a vehicle.”

“Orange rinds? What kind of remedy is that?”

He retches and I demand that Gundua stops the car.

I let Wa Munene out. He bends over and retches some more. Nothing happens, so we get back in the car. As soon as we start moving, Wa Munene promptly throws up all over my uniform.