Can you make yourself sound more attractive?

Accents are one way we make assessments of other people.

•Many nationalities recognise that there is a tone of voice that is instantly alluring, but do some speakers have an unfair advantage?

•Speakers with attractive voices are thought of as competent, kind and trustworthy. 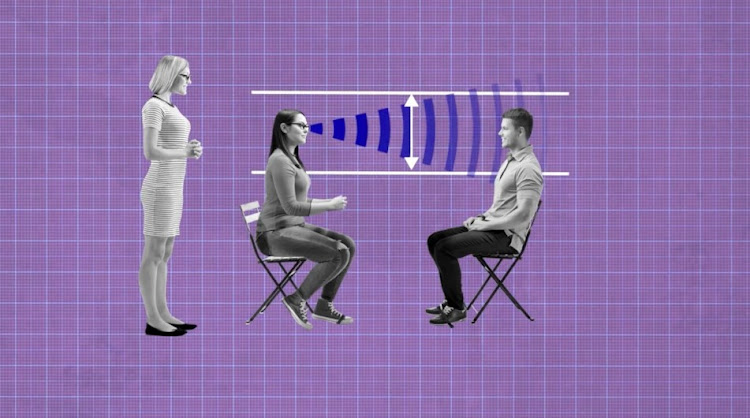 Studies have shown that women tend to lower their voice pitch when they are speaking to a man they find attractive.

It's a deep, sultry "bedroom voice" that gives some speakers their powers of seduction.

It's perfectly explainable too. Some people have objectively more attractive voices than others, and the fact that these rules are nearly universal reveals an important part of our evolutionary history.

Accents are one way we make assessments of other people. Speakers with attractive voices are thought of as competent, kind and trustworthy.

This in turn produces a "halo effect" – where we see good people as more attractive. So, what makes some accents attractive?

There is a vocal trait that seems to work for everyone, no matter where they are from.

"Whatever the culture, any woman coming from Japan or from the United States or from France or from anywhere in the world – they tend to prefer men with deep voices," says Melissa Barkat-Defradas, a linguistics researcher at the University of Montpellier.

The sexual preference for men with deep voices has been recorded in indigenous peoples from the Amazon to Tanzania and countless other Western and non-Western examples.

People associate deep voices with hunting abilities, career success and strength. We rate politicians with deeper voices as more serious and electable, regardless of sex.

Male and female job candidates with lower-pitch voices are also more likely to be hired. If you want to get by as a competent speaker, it pays to go down an octave or two

What does this apparently universal preference say about how we judge character? And are there exceptions to the rule?

The pitch of both men and women's voices decrease through adolescence. But you can predict, with a high degree of accuracy, what pitch a man's voice will be throughout their lives based on what it was at the age of seven.

The British TV series, Seven Up!, which began in the 1960s and tracked a group of children every seven years throughout their lives, provided Katarzyna Pisanski, a bioacoustician at the University of Lyon, and her co-authors with a sample from which to measure changes to our voices over time.

The children's pitch pre-puberty was a good predictor of their pitch in adulthood.

We know that voice pitch is linked to testosterone levels, which might be more important to romantic choice, as from an evolutionary point of view stronger men would be more sexually desirable.

In the case of the Tanzanian hunter-gatherers, a deep voice might be acting as a proxy for other skills that require more testosterone.

The pitch of the voice itself means nothing, but it gives a clue as to how capable a hunter the speaker is, and therefore how well he will provide for his children and how good a chance those children will have to pass on their genes in the future.

Men's adult testosterone levels are determined by their exposure to their mothers' androgens (the group of hormones to which testosterone belongs) during weeks 8-24 of pregnancy.

This suggests that something that could play an important role in our reproductive success is largely set from childhood and linked to our mothers' pre-natal hormone levels, says Pisanski.

Men's preferences for women are a little more complex. For a long time it was thought men prefer women with high-pitch voices (which, if voices deepen over time, might be acting as a proxy for youth and therefore the number of future years of fertility).

When looked at purely in terms of reproductive success, it pays for a man to find a woman who can potentially have more children.

The fact that women, too, are seen as more competent if they have a deep voice provokes an interesting thought for both Pisanski and Barkat-Defradas: can we manipulate our pitch in the right setting to adapt to our needs?

When we have a good conversation with someone, we tend to adjust the pitch of our own voice towards theirs – something called prosodic entrainment. But when we find someone attractive, the opposite is true.

You might wonder how these two opposite behaviours unfold on a date – surely a good date, and the sign we are attracted to someone, comes from a good conversation? Over the course of a date prosodic entrainment comes and goes.

At times of entertaining conversation we match our pitches, and at others, when we want to show our attraction we go in the opposite direction. Also, generally, women prioritise good conversation over attraction and vice versa, says Pisanski.

What is more, lowering or raising your pitch might be a sign of how attractive we find our date, but it also makes the other person more attracted to us.

We can use our pitch to manipulate others.

The one exception to this rule is that sometimes women's voice pitch goes down when they find a man attractive – particularly if it's a man who is popular with other women. In a speed dating scenario, some women lowered their voice on their dates with the most popular men.

Like our politicians, it might be that they were trying to appear more serious and less naive than their competitors, suggests Pisanski, who led the study.

This same speed dating experiment, conducted on a small sample of French adults, found that the men also preferred those women with deeper voices – something that Pisanski says might be indicative of changing tastes as men look for serious, ambitious, career-driven women.

"Perhaps women now try to sound like men – more competent or dominant. Women are starting to speak lower," says Pisanski. "And perhaps, at least in some cultures, men are wanting and are preferring women who exude maturity and competence, and not necessarily youth and fertility."

Barkat-Defradas agrees, though points out these trends have only been seen in French adults so far. "In France men tend to prefer females with lower voices than anywhere else in the world," she says. Maybe there is something to the "bedroom voice" after all. Perhaps, unlike the rest of the world, French men have a slightly different taste when it comes to accents.

Or is there just something about the French – and the way they speak? It often ranks highly on unscientific accent preference polls. Barkat-Defradas suggests that French speakers pout more to form words, which might be seen as attractive.

The difficulty when looking at languages rather than specific qualities of speech is that languages also communicate national stereotypes. The non-French might already associate francophones with French soft-power – their food and wine, Paris, the Côte d'Azur and all the romantic associations that come with them. For French natives, of course, these associations are much more accent-specific.

But could putting on an accent help you to appear younger or more masculine? Humans have a remarkable vocal range, but also a good ability to detect fakers and are not easily deceived, says Pisanski, referring to data from an as-yet-unpublished study. "If we could go around deceiving people all the time with our voices, then the entire communication system would collapse," she says.

A desire to give the impression of competence might be one reason behind the rise of "vocal fry" among young American women, says Pisanski. Vocal fry is where the pitch of our voice falls below a natural level, creating a sound that is rough.

"I think it may have been just a byproduct of women trying to speak in a lower, more dominant voice, but we have biological limits to how low we can go," says Pisanski. "And this is why vocal fry is more common in women's voices than men. Men can go much lower essentially."

"From what I know of the most recent work, it doesn't actually appear to make the woman sound more intelligent, at least from the few studies I've seen," she says. For example, if your voice goes too low, vocal fry might harm your job prospects, maybe because the trope of women speaking with rough voices is culturally associated with unseriousness, suggest the authors.

If you need another reason not to put on an accent, there is evidence it pays to be completely average. People with average looks and average voices are thought to have more heterozygous major histocompatibility complexes (MHCs).

This is a sequence of DNA that codes for cell-surface proteins that help our immune systems detect which cells in our bodies belong to us and which are outsiders. Being able to do this means we can quickly identify pathogens and destroy them. Therefore, average individuals are better placed to pass on useful genes for a healthy immune system.

It could also be that average-voiced individuals are easier to understand, in part because we are exposed to the average more frequently than people at the extremes.

"We really don't like what we don't know," adds Barkat-Defradas.

Much of this research, you might note, has been conducted on heterosexual people, in part because evolutionary biologists want to find explanations for modern human behaviours in the selective pressures our ancestors were exposed to.

Our female ancestors would have looked for masculine qualities, the theory goes, as stronger men can take better care of their families, while men sought young women who have more child-bearing years ahead of them.

When I put this to Pisanski, she agreed that there was a bias towards studying men's voices.

What research has been done on homosexual people has largely looked at male preferences – and found broadly that gay men have similar tastes to straight women. Meanwhile little research has been conducted on LGBT+ women.

These theories are based on purely biological explanations of desirability. But is that still relevant today? Only if your biggest motivation is to mate with someone who will give your children good genes.

For the rest of us, maybe we find satisfaction with a good conversationalist.

Men are also more attractive if they have experience of being in long-term relationships.
Sasa
4 weeks ago

Why people watch pornography at work

Fuel guzzling limousines, stately office furniture, carpets and curtains will have without restraint to be imported
Opinion
4 weeks ago

WATCH: Top 10 Songs that will make you happy

For this list, we’ll be looking at the most upbeat tunes that will put a smile on your face!
Sasa
4 weeks ago

Playing music in these situations distracts your mind, promoting a more positive experience.
Sasa
4 weeks ago

Learn what causes bowel cancer and the symptoms that you should look out for.
Health
4 weeks ago

He said the notion of drinking eight glasses a day is unrealistic and people should listen to their bodies.
Sasa
1 month ago
by BBC NEWS None
Entertainment
19 July 2022 - 20:12