Lung’aho is looking for more diverse roles that will push him even further away from his comfort zone.

•Lung’aho is looking for more diverse roles that will push him even further away from his comfort zone.

•He has made a name for himself with his roles in two of Kenya’s most popular telenovelas - Maria and Zora. 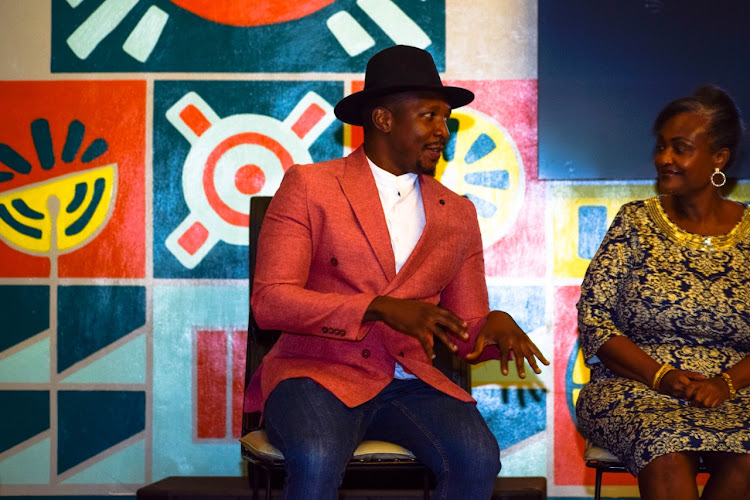 In only three years, Blessing Lung’aho has made a name for himself with his roles in two of Kenya’s most popular telenovelas - Maria and Zora.

Recently, the Kalasha-nominated actor has pivoted into something different from what he’s used to - playing the vengeance-seeking Dom in the Showmax Original thriller series Igiza.

Launched in May, Igiza follows Serah Ndanu as Linda and Nicole, twin sisters caught in an unending bitter war.

Lung’aho’s Dom stands on one side of this sibling rivalry as Nicole’s accomplice, the man on the outside who helps her set her plans in motion.

“The most interesting thing about playing Dom is that he’s a very motivated individual. You know how all of us just want to make our mothers proud. That’s it for him. It’s exciting playing someone that driven,” Lung’aho says.

“Ambition or not, Lung’aho believes his character is the moral center of the show. “He's the only guy whose integrity is firm. If Dom tells you to do something, you’ll do it.”

Before he got this role in Igiza, Lung’aho had just wrapped up playing Sarah Hassan’s wealthy heartthrob in Citizen TV’s beloved telenovela Zora. Dom is a new challenge for him. “It’s unlike anything I’ve played before,” he says.

He enjoys the thrill of it, this unbridled pursuit of revenge, and this new dangerous territory that Igiza leads his character Dom to as the show ventures deeper and deeper into the criminal underworld that is Nairobi’s money-laundering business.

“The stakes are very different between playing Alejandro in a telenovela and being Dom. In a telenovela, the worst thing that can happen to my character is that he won’t find the girl in the end. So the audience experiences this world through my emotions and through the romance that is supposed to happen, the will-they-won't-they,” Lung’aho says.

“In Igiza, the stakes are very high because, at any point (spoiler alert), anyone can die. So every second counts, unlike in a telenovela where the story can be stretched.”

One of his preparations for the role was to gain weight to fit into what the director, Abdi Shuria, had in mind.

“He’s very specific about the characters he brings to life. It’s my challenge to give him that so it will be easier for him to tell this story. This show is about teamwork: I have to bring something, then he takes that and pushes it to the next level,” he says.

When he booked the role, Lung’aho sat down with Abdi, and asked him what his vision for Dom was in the world he was creating. “It’s something I do with all my roles,” Lung’aho said.

“He (Abdi) explained to me: ‘Dom is a brawler. He’s the kind of guy you don’t mess with in a bar. He's quiet and likes to be by himself. But, you know, if I mess with that guy, I'll get a beat up.’ So I asked him, like a muscular guy? He was like, no. He pointed out someone to me with rough hair and a big build and said, ‘I know that guy doesn’t go to the gym, but I can't mess with them.’

That was it for Lung’aho, who immediately connected to the idea of Dom and switched his diet.

“I was a bit skinny and toned at the time because of being Alejandro but the moment I wrapped that role, I have been eating nothing but chips, breakfast, lunch, supper,” he reveals.

After Dom, Lung’aho is looking for more diverse roles that will push him even further away from his comfort zone.

He believes he has a funny streak and would like to be cast in a comedy role next.

“For years I’ve been trying to convince people that I’m very funny. I would love to showcase this funny side on screen because you’ve all seen variations of my dramatic acting. Now if I get a comedy role, I'll get to show you guys how much range I have,” he says.

She is the second black woman to do so, after Whoopi Goldberg.
Sasa
7 months ago

In Middle East and Muslim nations, same-sex relationships are criminalized.
Sasa
7 months ago

It inspired countless memes and Halloween costumes and kickstarted sales of green tracksuits.
Sasa
7 months ago

Not getting enough quality sleep can have a serious physical and psychological impact.
Sasa
7 months ago

Cashy calls out OG for being a deadbeat

That one who has money is my medicine, she said of him
Sasa
7 months ago

He was not a gold-digger like her exes, she said
Sasa
7 months ago

Almasi wants a snake as his pet

The actor expressed desire after playing with one on his neck
Sasa
7 months ago
Post a comment
WATCH: The latest videos from the Star
by MARGARET WANJIRU Health & Lifestyle Journalist
Entertainment
14 June 2022 - 10:37
Read The E-Paper