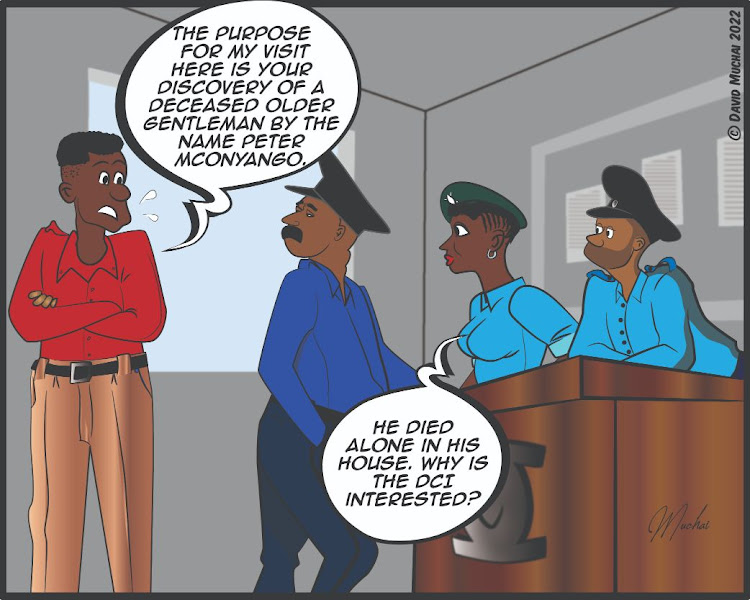 About one month ago, a Mombasa denizen by the name McOnyango came to visit his father at Jiji Ndogo. He claimed to have talked to his father only days before and not heard from him since.

When we visited the scene, we found that the senior McOnyango had been dead for several weeks and his body lay decomposing on the couch. Today, we receive a visited from a very conceited DCI investigator from Nairobi.

“My name is Senior Detective Gundua, DCI.” He looks from Sophia to me. “I take you’re Sgt Makini and Sgt Sophia Martha Kali?”

“Is that your real name or what you do?” I ask.

“If you behave like your name suggests, Sergeant, then I suggest you pay attention. I actually fail to understand how your post is still open. Weren’t such miniscule police posts as these phased out months ago?”

“Is that why you’re here, sir?” Sophia asks. “I’d have expected someone from our branch, not DCI.”

Detective Gundua looks around, nose crinkled as if the office reeks. “Where’s your boss, Inspector Tembo?”

“I sent a memo specifically requesting his presence here today.”

“The memo was addressed to Inspector Tembo, right?” I say. “Not to E. Coli.”

The detective looks confused. “Who’s E. Coli? I thought this post is manned by only three personnel.”

Sophia ribs me with an elbow. We both suppress imminent grins.

“E. Coli is the bacteria in the boss’ stomach,” I say. “That’s why he’s indisposed.”

“Very funny, Sgt Makini.” Gundua says it, but he doesn’t look amused. “The purpose for my visit here is your discovery of a deceased older gentleman by the name Peter McOnyango.”

“He died alone in his house. Why is the DCI interested?”

“The post-mortem report is out and it contains some discrepancies we need to iron out. How well did either of you know Mr McOnyango?”

“What does ‘discrepancies’ mean?” I ask.

“Did Mr McOnyango have any known visitors you might know of?”

“You know, I got that question a lot when I was in the USA.” We turn around to see Inspector Tembo at the door. “They kept saying, ‘I have a friend from Kenya. His name is John. Do you know him?’ Like I should know every Kenyan.”

Detective Gundua shakes his head. “And you are?”

“Wondering why you assume we would know every citizen personally. The name is Tembo. Inspector Tembo. You must be Detective Gundua. What can I do for you, detective?”

“It must’ve been lost among thousands of the other memos we receive.”

Gundua sneers as he looks around our tiny office. “Thousands, you said?”

“How may I help you, detective?”

“From a conclusive PM report, it has been determined that Peter McOnyango died of a bullet shot through his heart. I’m here to find out who did that.”

“We found a bullet inside Mr McOnyango’s body. The ballistics report is not out yet, but soon it will be. Given that the known number of registered firearms in this village is four, I will have to collect all your weapons for a ballistic exam.”

“You can’t leave the Police Post unarmed,” I protest. “We need our weapons.”

Detective Gundua gets in my face. “Sgt Makini, seems to me the only people getting shot here are innocent citizens. Frankly, I have a very strong feeling one of your weapons was used. I’m looking forward to shutting this place down once and for all.”