What is love? Really, what is it?

Old man says it is whatever you want it to be 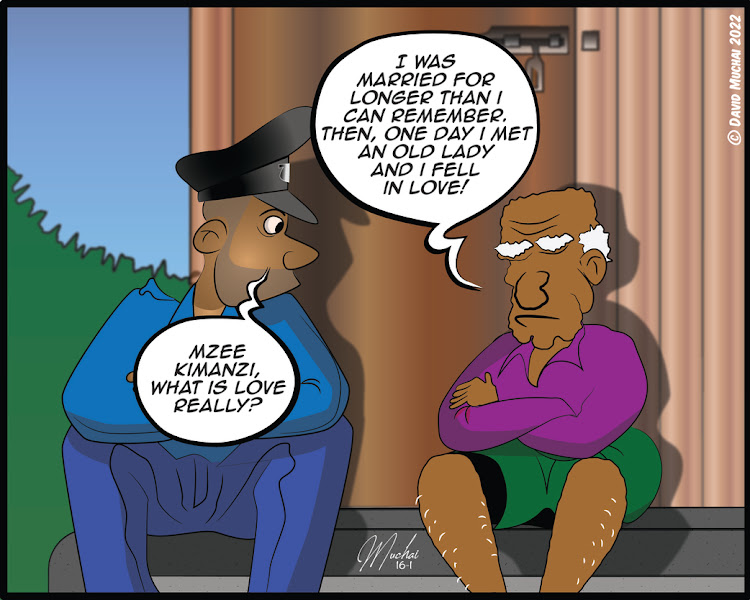 I’m not too taken by social media. First, the crappy phone network in Jiji Ndogo means a single meme takes ages to load. By the time you get past the picture of a pensive frog and actually read the lower caption, your mind has wandered away to less humorous territory.

Still, I know the people who live in the social media universe have come to dub January, Njaanuary. Whatever you call it, it’s a hard time for most people. Bills, school fees, house helps stuck in ocha, Christmas hangover, you name it.

At their low points, humans engage in deeper musings than when things are peachy. They cogitate on the meaning of life, why it has to include so much suffering for some while catering all the goodies to others.

I, Sgt Makini of Jiji Ndogo Police Post, am not immune to such ponderings. At one time, when I had no clue where my next meal would come from until my next cheque, I found myself speculating about crime. Could I commit a crime, I wondered, if the law was not at play? Like in that Purge movie. If I was allowed one illegal thing that came with no consequences, what would I do? The answers hit too close to home, so I dropped that line of thought.

Among my many tribulations this Njaanuary is a love affair with my colleague Sgt Sophia that has been on-and-off more than a switch in a bar toilet. And therein lies my dilemma. What is this thing called love? And why can’t I get rid of it? I mean, Sophia seems almost impervious to its vice-like grasp. She wears it like a cloak she can get in and out of at will.

On one of my patrols, I come across Mzee Kimanzi, the oldest citizen in Jiji Ndogo. No one knows how old he is, not even him. If someone tells me Mzee Kimanzi was around when Noah was constructing the Ark, I would have to believe him.

“Longer than yesterday, the pain worse. Today, it feels like I have four knees. All with aggravating arthritis.”

“Don’t be sorry. Be ready. Age is a bastard that never discriminates.”

“What about love?” I plop down next to him. “You’ve lived long enough to probably know the answer. What exactly is love?”

“And it’s everything. It’s nowhere and everywhere. All I’m saying is, it’s whatever you want it to be.”

“That doesn’t tell me much, Mzee.”

“Or maybe it tells you everything. I guess things haven’t worked out for you with that cute policewoman then, huh?”

“You know about that?”

“Who doesn’t? You might as well wear a sign that says ‘Lovelorn’. How long has she been giving you the runaround?”

“And yet, we both know someone who was married to a woman two weeks after they met.”

“We had three wonderful kids together, now all grown and roaming God’s earth. Then one day, I come across this old woman in Nairobi, and my heart stops.”

“Then what, Mzee Kimanzi?”

“Emergency room, that’s what. But tell you something though, for the first time in my life, I was in love.”